By Saniya Bulatkulova in Tourism on 6 November 2022

ASTANA – One motorbike, one passenger and two warm summer months to discover new places on another corner of the continent. The story of Nurseit Niyazbekov, an assistant professor of the international relations department at Almaty-based KIMEP University, impresses and inspires. Nurseit traveled to 14 European countries, covering a distance of 17,000 kilometers from July 1 to Aug. 19. 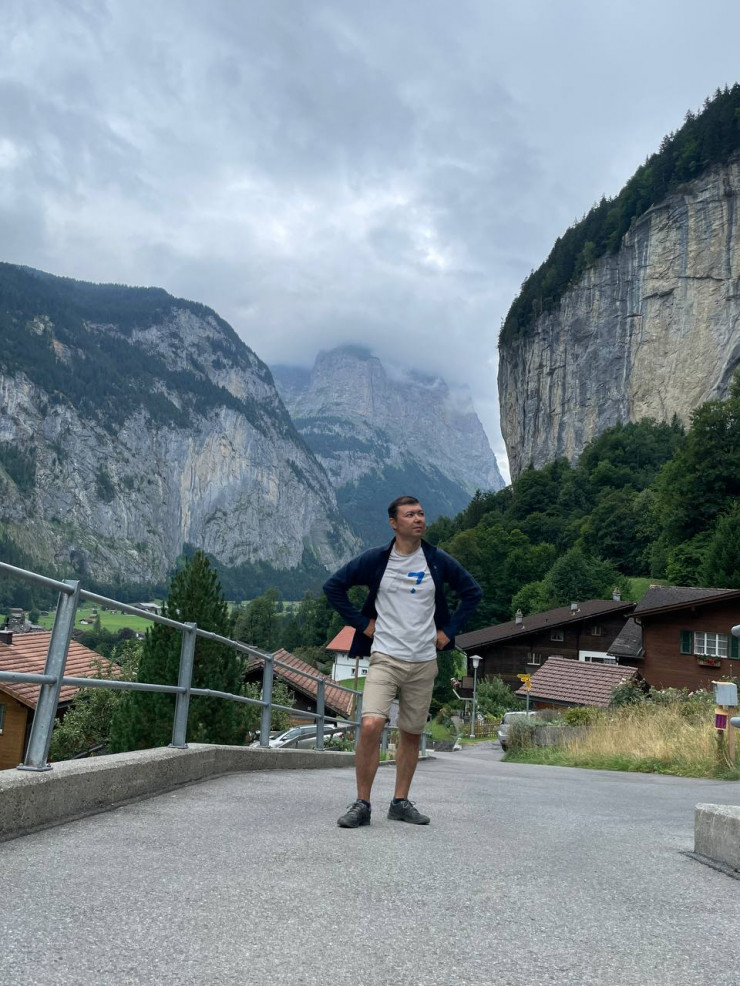 In the village Lauterbrunnen in Switzerland. Photo credit: Nurseit Niyazbekov

In an interview with The Astana Times, Niyazbekov said that the purpose of his journey was quite simple.

“This is not my first journey, but the purpose is always the same – to see the world, experience new emotions and meet new people. It might seem basic, but I really enjoyed my journey at the moment,” said Niyazbekov.

He said that Turkey touched his heart the most. “I loved Turkey with my heart and stomach. I was there many times, I speak Turkish and I studied at the Turkish lyceum, so I felt like home,” he said.

In terms of natural beauty, he liked Switzerland the most and Italy was the best in his mind for walking, eating and communicating with people.

“I was in Italy for the second time. Their food was understandable and I felt very comfortable riding my motorcycle around the country,” said Niyazbekov.

Recalling which country surprised him the most, he said it was Albania due to its culture, which is completely different. 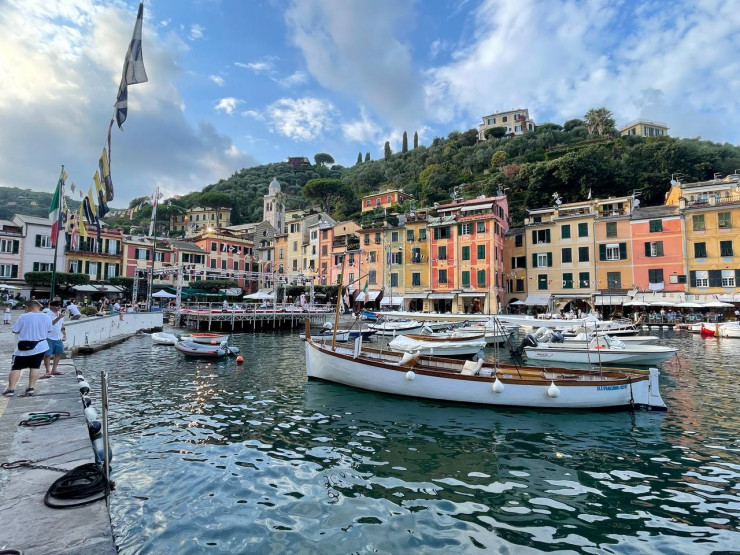 “Even the traffic in Albania was different from all the countries I have been to. There were no traffic lights, people have a distinctive language and culture is far beyond my grasp. Romania also surprised me in terms of culture,” said Niyazbekov.

Niyazbekov said he came up with this idea approximately two years ago, but he had to postpone it due to the pandemic.

“I saw that governments started to open their borders, and decided to do it in late May. Travel planning involves addressing several tasks. The first was, of course, getting a Schengen visa. The second was arranging motorcycle insurance. It took the most time as I waited for my visa for approximately three weeks. Then I sent a motorcycle from Almaty to Atyrau not to drive through our vast territory. I should say in advance that returning from Europe I drove it from Atyrau to Almaty,” said Niyazbekov.

He noted the difficult visa procedures. “People usually travel by plane. As for me, I planned to cross many borders, therefore I was asked to make a reservation for all hotels on my route. I provided them with information about 17 reservations. I chose Italy because my sister lives in Milan, and I planned to stay there longer,” said Niyazbekov. 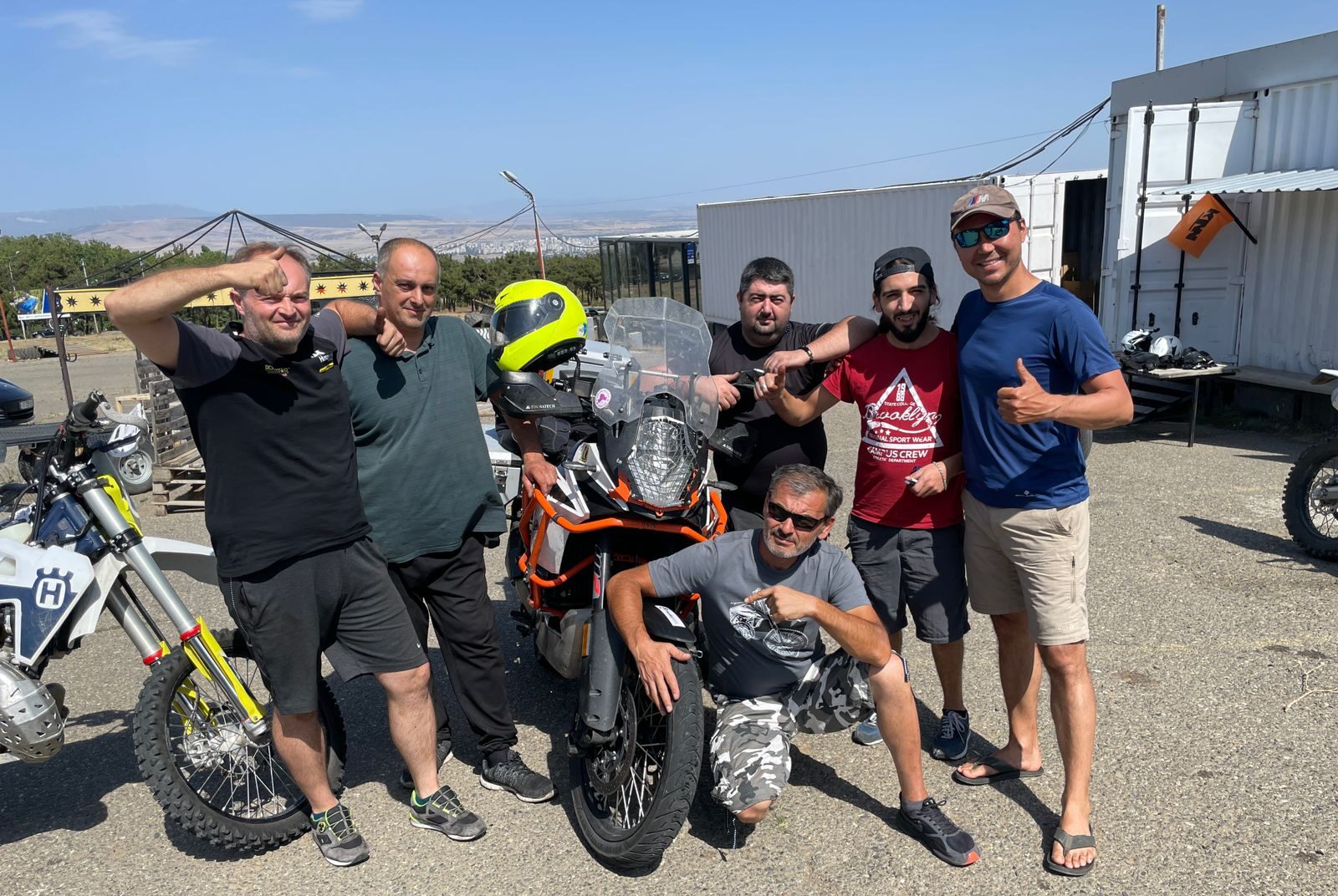 Where the journey began

Niyazbekov started his journey on a bike from Atyrau city, which he chose to save time. If he started from Almaty, it would take nearly three or four days more.

“This decision also saved my energy and nerves. The road was long, nearly 2,500 kilometers. Of course, I also saved money, although sending a motorcycle from one city to another cost approximately 50,000 tenge (US$108), and I had to buy a ticket for the plane from Almaty to Atyrau,” he said.

The travel route across 14 countries

Niyazbekov went from Atyrau to Astrakhan, then to Grozny, Vladikavkaz, Tbilisi, Batumi, Trabzon, Samsun, Ankara, and Izmir. He took a ferry in Izmir to go to Greece. Then he went to Athens, Albania and along the Adriatic Sea – to Montenegro, Croatia, Bosnia and Herzegovina, Slovenia and Italy.

He went to Italy through Trieste, then to Venice, Milan, Bologna, Florence, Rome, Tuscany, Genoa and Domodossola. From Domodossola he went to Switzerland, where he stayed for five days. 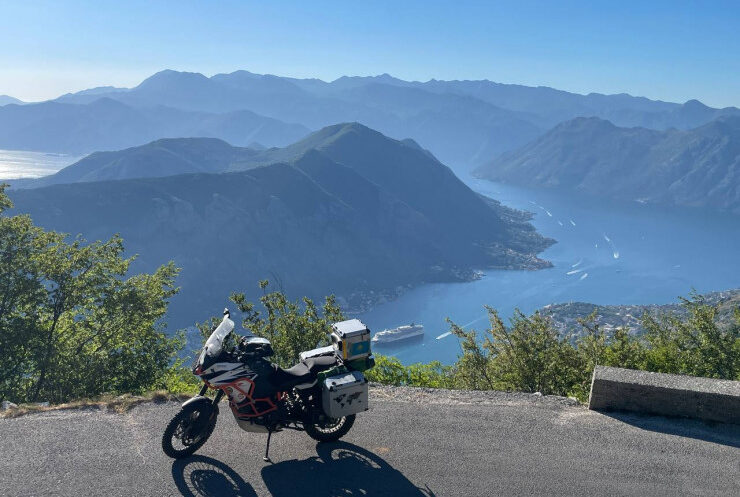 Over the city of Kotor in Montenegro. Photo credit: Nurseit Niyazbekov

“During this time I visited the capital, and saw the main attractions – lakes, peaks and passes. Then I went back to Italy, I went to the Dolomite Mountains, and then to Slovenia, where my bike broke down. Once I repaired it, I drove to Slovakia, then to Austria, Hungary, Romania, Bulgaria, and Türkiye. I came home the same route,” he said

According to him, the best roads and roadside services were in Turkey and Italy, including spots to eat, refuel, refresh and stay overnight. Prices in Italy, however, were higher than in Turkey. In Switzerland, the service was expensive as the country is very small and roadside rest stops are rare.

One of the challenges he faced was his motorcycle breaking down, which happened twice, in Slovenia and in Georgia.

“People in Europe might seem slightly egoistic, that is why I was surprised to find out they cared about my problems. Seeing me alone on the roadside, they offered help,” Niyazbekov said.

Another challenge was expensive fuel, which he associated with the general surge in the cost of living. 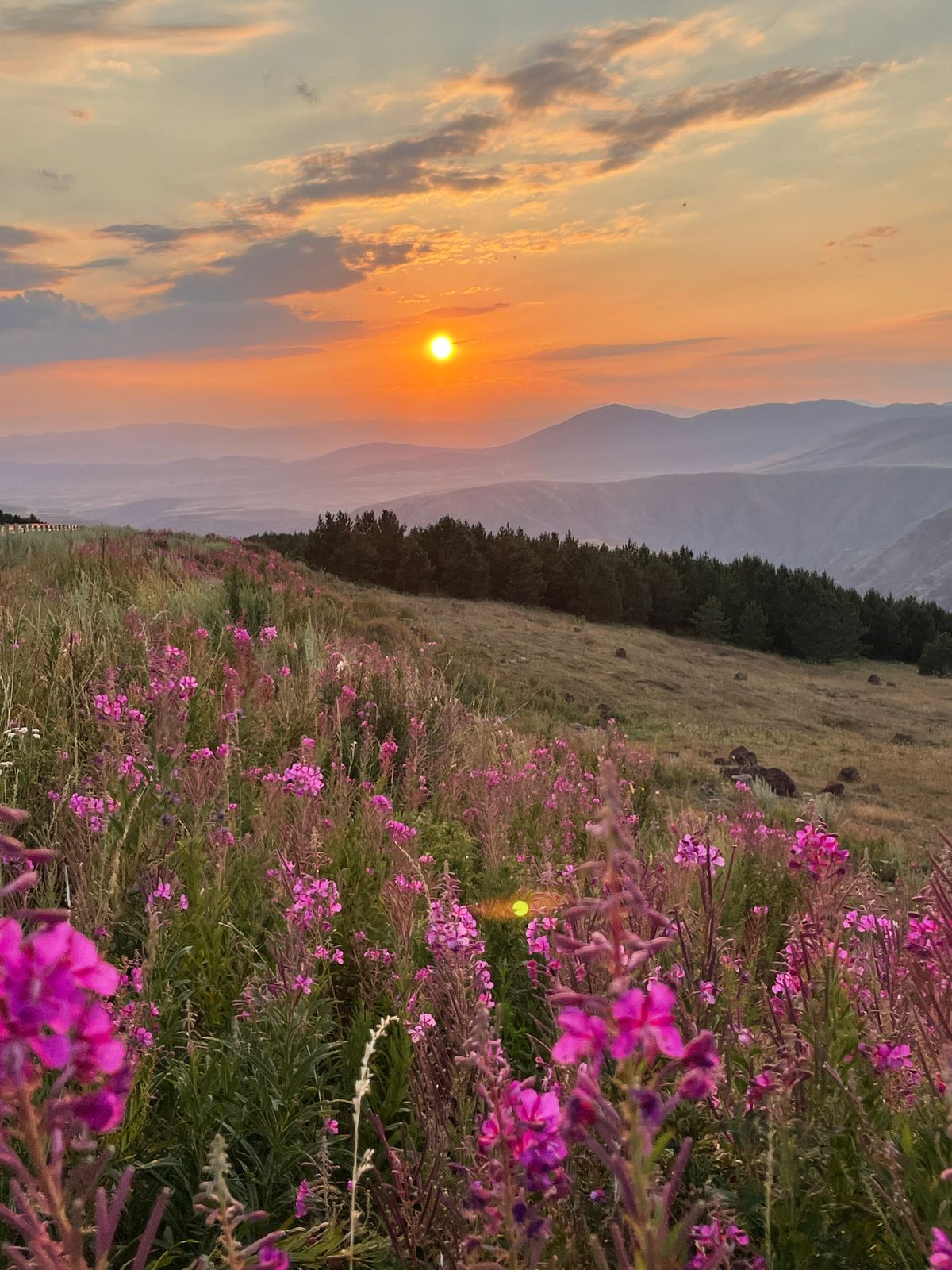 “I went to Europe for the first time after the pandemic. I immediately paid attention to the petrol price. I remember those times when petrol cost 1.5€. The second thing that caught my attention was the discussion of politics and Ukrainian flags hanging everywhere. I noticed a lot of cars with Ukrainian numbers, but I did not find any other major changes,” said Niyazbekov.

Niyazbekov said he was concerned about his motorcycle, because for him, it is a “means of transport and a house.”

“If you want to have the same journey in the future, I want to say one thing: you should not be afraid. If you have not found fellow travelers, this is not an issue and obstacle. The main thing is to plan everything. This is even more interesting. It opens up new opportunities. I was bored, especially in the evening, but the rest of the time was interesting  – every new day was not like the previous: new places, new people,” said Niyazbekov. 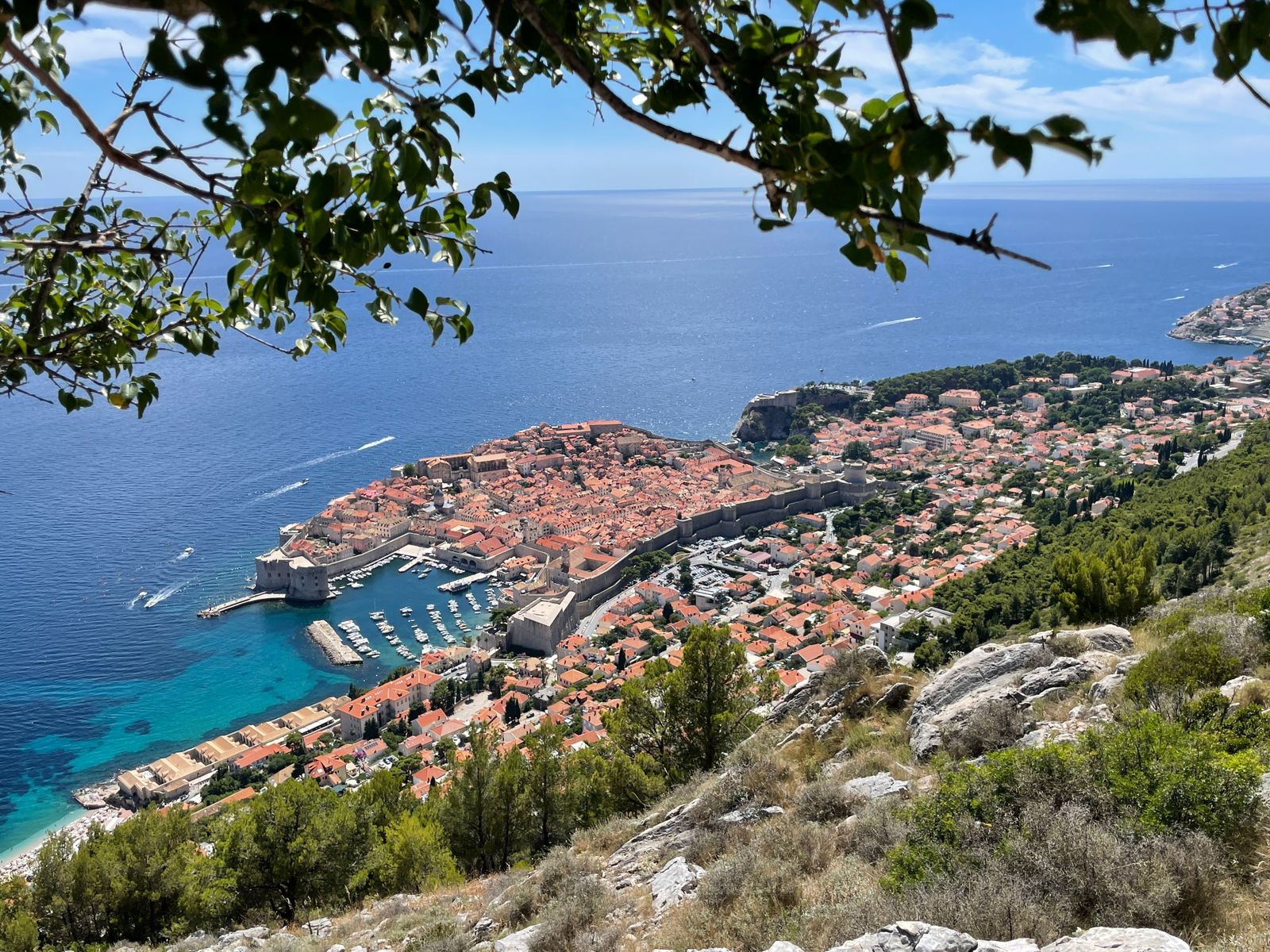 The journey around Europe is not the first travel experience for Niyazbekov. He has traveled on a bike for four years. In 2018, he traveled all over Central Asia and visited Tajikistan’s Pamir tract, the highest mountain road in the former Soviet Union, which is famous among bicycle, motorcycle and car travelers.

In 2019, he traveled with his friend on motorcycle to Altai, then to Mongolia and Baikal. In 2020, he did not go anywhere due to the pandemic and in 2021, he had a solo journey to Kazakhstan’s Altai through Ust-Kamenogorsk city, Katon-Karagai national nature park, Bukhtarma water reservoir and Markakol state nature reserve.