By Zhanna Shayakhmetova in International on 8 November 2022

ASTANA – The European Union (EU) and Kazakhstan seek to strengthen their strategic partnership by signing an agreement on raw materials, batteries and renewable hydrogen on Nov. 7 at the sidelines of the 27th UN Climate Change Conference of the Parties (COP27), which kicked off in Sharm El-Sheikh, Egypt. 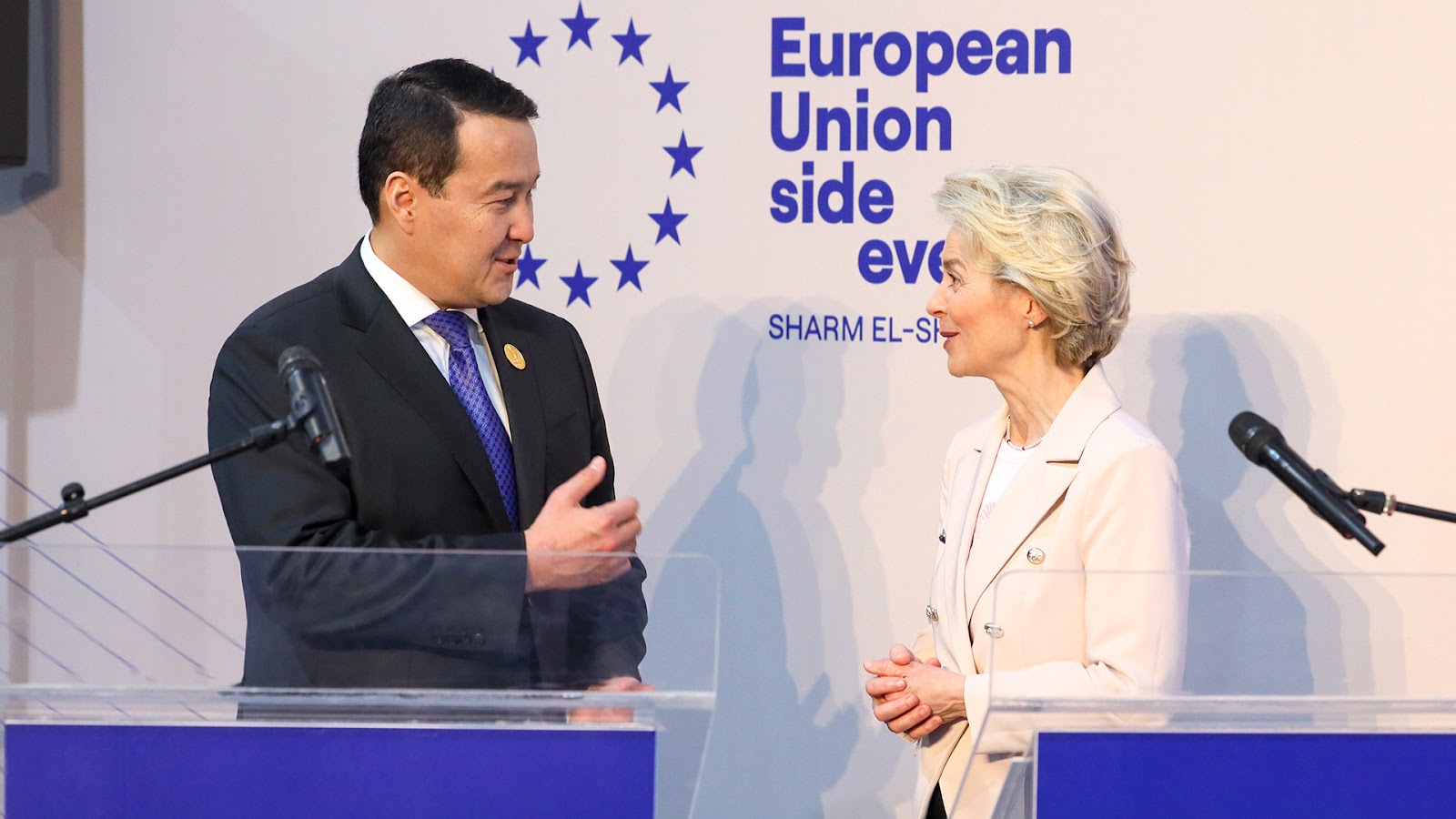 The agreement focuses on the development of a secure and sustainable supply of raw materials and refined materials, renewable hydrogen and battery value chains, and contributes to the green and digital transformation, reported the press service of the European Commission.

Prime Minister Alikhan Smailov, who represented Kazakhstan at the COP27, said that the document will create conditions for the establishment of financial and technological cooperation between Kazakhstan and EU industrial alliances.

“Our country has all the necessary attractiveness factors for European business, including diversified energy sources and high transit-transport potential. The EU remains one of Kazakhstan’s largest and most significant trade partners, accounting for about 30 percent of the country’s foreign trade. At the same time, today we see significant potential for building investment cooperation and increasing mutual trade,” said Smailov, as reported by the PM’s office.

“This partnership with Kazakhstan shows Europe’s commitment to work with partner countries on our shared commitments to a greener and more resilient future in line with the Global Gateway Strategy and the objectives of the REPowerEU Plan [A plan to rapidly reduce dependence on Russian fossil fuels and fast forward the green transition],” said Ursula von der Leyen at the document signing ceremony.

It is reported that President von der Leyen and Kazakh President Kassym-Jomart Tokayev confirmed their readiness to deepen economic cooperation in the critical raw materials domain and agreed to intensify work on a Memorandum of Understanding as part of the UN General Assembly in September 2022.

Prime Minister Smailov reaffirmed the country’s readiness to become a regional center for renewable energy development as he presented the national vision on climate change issues at the COP27.

The Kazakh government reiterated its firm commitment to the goals and objectives of the Paris Climate Agreement.

“Our country has set an ambitious goal of achieving carbon neutrality by 2060. As part of this, we plan to adopt a Low Carbon Development Strategy by the end of the year. This will be a historic moment: for the first time in Central Asia, a country is adopting such an ambitious document,” Smailov said.

The country has about 3 percent of green energy as part of the total energy output. The goal is to increase its output to 15 percent by 2030, adding 7 gigawatts of additional power by 2030.

The government intends to stimulate green investments with the Astana International Financial Center (AIFC) serving as a regional investment center for green finance.

Kazakhstan’s agenda also includes a fivefold expansion in energy production from renewables from 3 to 15 percent, doubling the amount of energy produced from environmentally friendly sources from 20 to 38 percent and expansion of the national carbon absorption capacity by planting more than 2 billion trees by 2025. A 30-percent reduction in the share of energy generation from coal, from 68.9 to 40.1 percent is expected as well.

This year, more than 120 countries are taking part in the United Nations Climate Change Conference COP27 with a mission to ensure the full implementation of the Paris Agreement. A high-level session mostly attended by ministers will take place Nov. 15-18.