ASTANA – The repairs at the Caspian Pipeline Consortium (CPC) will not affect revenues to the National Fund and the nation’s budget, said Prime Minister Alikhan Smailov at a Nov. 10 Senate briefing, reported the Prime Minister’s press service. 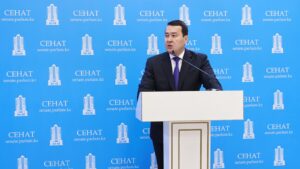 In October, the CPC expected to finish repairing two single-point moorings, the SPM-1 and SPM-2. However, due to inclement weather, these works were suspended.