By Staff report in Conference on Interaction and Confidence Building Measures in Asia, International on 11 October 2022

ASTANA – The sixth summit of the Conference on Interaction and Confidence-Building Measures in Asia (CICA), which will take place in Astana on Oct. 12-13, seeks to sum up the results of Kazakhstan’s chairmanship of two years, reported the press service of the Kazakh Foreign Affairs Ministry. 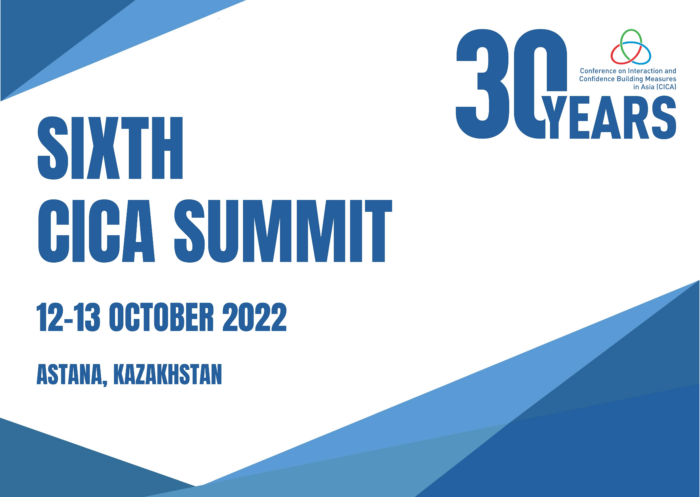 The summit will also honor the 30th anniversary of the CICA initiative.

According to Spokesperson of the Kazakh Foreign Ministry Aibek Smadiyarov, the summit will welcome 11 presidents from Azerbaijan, Iraq, Iran, Qatar, Kyrgyzstan, Palestine, Russia, Tajikistan, Turkey, and Uzbekistan. President of Belarus Alexander Lukashenko will participate as an observer at the sixth CICA summit. Vice-Presidents of Vietnam and China will also attend the summit.

Nearly 50 delegations from member states, observer states, observer organizations, partner organizations, and guests of the chairmanship are expected to attend. As part of preparing for the event, the CICA Senior Officials Committee (SOC) will hold meetings on Oct. 10-11. The summit is anticipated as one of the significant post-pandemic foreign policy events in the country and on the continent.

Kazakhstan proposed the CICA creation in 1992 at the 47 United Nations (UN) General Assembly. Over time, the CICA has evolved into a multilateral instrument for strengthening security and prosperity on the Asian continent. The number of member states has grown to 27, encompassing 90 percent of the Asian continent.