in Conference on Interaction and Confidence Building Measures in Asia, International on 13 October 2022

ASTANA – The security situation in Asia forms the basis of global security, said President Kassym-Jomart Tokayev during his opening speech at the sixth summit of the Conference on Interaction and Confidence Building Measures in Asia (CICA) in Astana on Oct. 13. 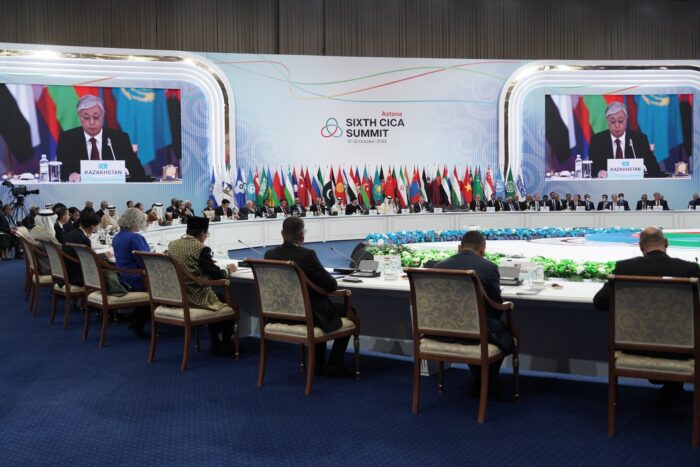 “We regard our organization as an important component of the Asian security system based on the principles of mutual respect for each other’s interests,” said the President.

He highlighted that the forecast of the 21 century being the century of Asia is now a reality, and that CICA needs to focus on creating a new global agenda that will strengthen the Asian continent’s role in international affairs.

“For several millennia, the states of our macro-region have been the main driving force behind the social, cultural, and technological growth of humankind. This tremendous historical experience can become a solid foundation for building a new sustainable and inclusive world order based on the principles of sovereign equality, peaceful coexistence, and justice,” said Tokayev.

Citing Asia’s significant human and natural resources and being home to 21 of the world’s 30 largest cities, Tokayev said that the region had surpassed other continents as the global economic leader in terms of nominal GDP and purchasing power parity.

Only $1 trillion dollars of the projected $30 trillion in middle-class consumption growth by 2030 is expected to come from Western economies.

“But the future of Asia itself depends on our collective willingness to strengthen dialogue among cultures, traditions, and worldviews,” he said, expressing confidence the CICA will promote these values and facilitate cooperation between countries and organizations of the continent. “Kazakhstan, as the chair of the conference, intends to step up efforts to advance the CICA process. With the support of member states, this has already brought about tangible results.”

Last year, the organization revised the Catalogue of Confidence Building Measures, established the Council of Eminent Persons, transformed the Think Tank Forum into an analytical advisory body, and held the business council, the seventh business forum, and the fifth meeting of the Youth Council.

The 2022 summit will establish the CICA Fund, which will aim at creating a special mechanism for the selection of CICA projects and collecting voluntary funds for their implementation.

Tokayev also highlighted the growth of observers and partners, which now include Turkmenistan as an observer and the Eurasian Economic Union (EAEU) and the Association of Southeast Asian Nations (ASEAN) as partners. The summit will also consider the accession of Kuwait to the CICA as a member state.