By Zhanna Shayakhmetova in Society on 11 October 2022

ASTANA – The Kazakh capital hosted the fourth Climate Dialogue conference highlighting the priorities and mechanisms of the draft carbon neutrality strategy  until 2060 at the Astana International Financial Center on Oct. 6. The document was developed by the Ministry of National Economy in cooperation with national experts. 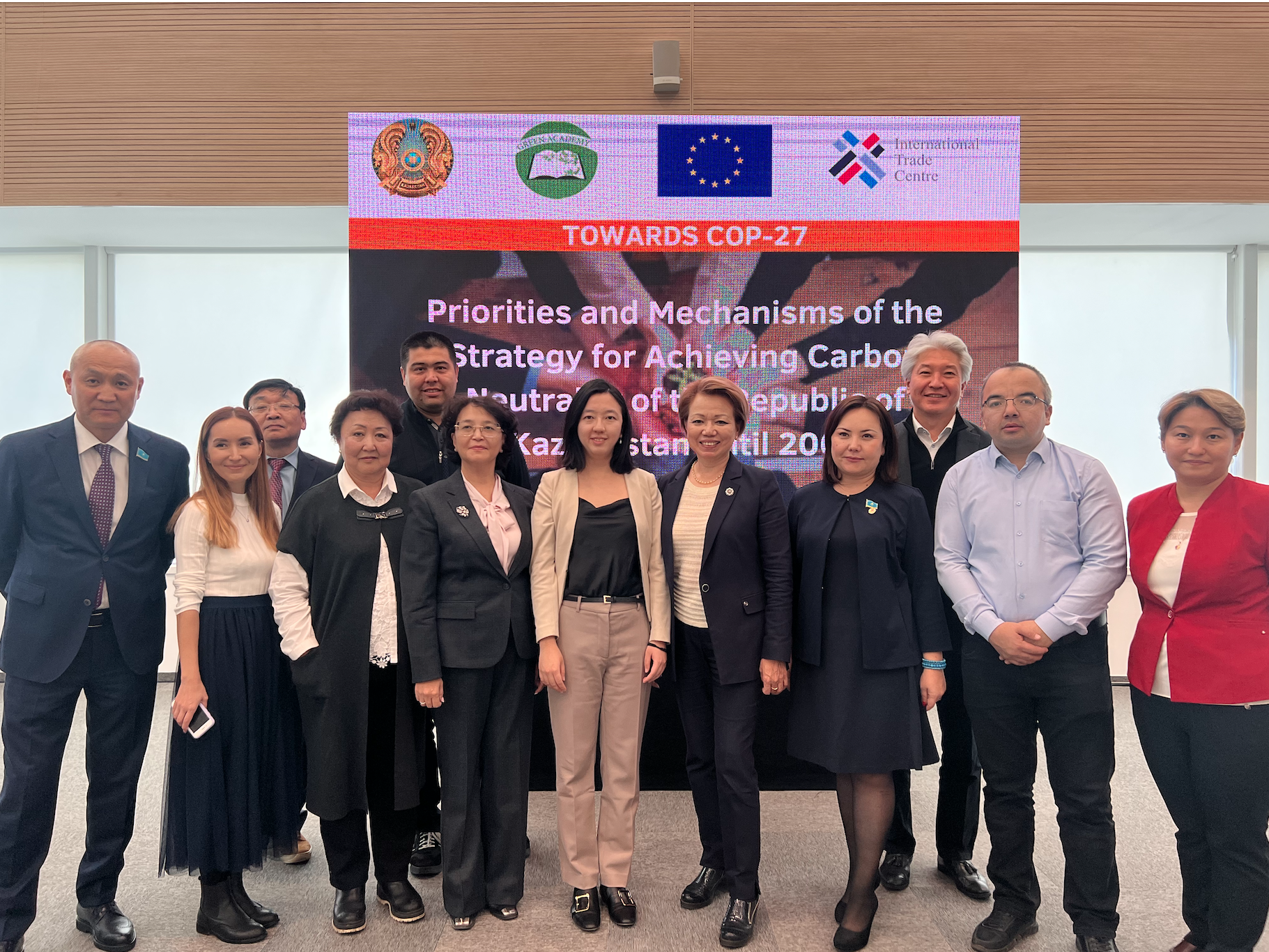 The participants of the conference.

The event was organized by the Green Academy Scientific and Educational Center with the support of the Ministry of National Economy of the Republic of Kazakhstan, the European Union Delegation and ITC.

“We had intensive dialogue at the COP26 [the 26th session of the Conference of the Parties to the UN Framework Convention on Climate Change]… Ahead of COP27, the EU together with the United States initiated and invited Kazakhstan and other countries to join the Global Methane Pledge, which has mobilized over 100 countries to cut their collective methane emissions. We are grateful to EBRD for its support to Kazakhstan on this topic,” said Madalinsky in his opening remarks.

According to Ainur Kopbayeva, the Director of the Department of Climate Policy and Green Technologies of the Ministry of Ecology, Geology and Natural Resources, Kazakhstan joined all international treaties in the field of climate change because these issues are vital for the country.

“Kazakhstan observes a high vulnerability to climate change. All these issues are reflected in the national reports. I would like to highlight the problem of water shortage due to the melting of glaciers. We observe extreme hydrological phenomena. We see challenges in the forestry sector, as well as agriculture affected by climate change,” said Kopbayeva.

President Kassym-Jomart Tokayev announced plans to achieve carbon neutrality in December 2020. The draft strategy is now at its final stage.

Deputy Chairman of the Board of the Institute for Economic Research Kuanysh Beysengazin said that the relevant associations, ministries and government agencies were involved in finalizing the strategy.

“In the process, we analyzed 53 strategies that had already been adopted. We studied their main elements and focused on advanced international standards. We have sectoral approaches, as well as cross-cutting approaches to financing and green investments. We are also interested in climate change awareness and seek to work with the public, business and the population in that direction,” said Beysengazin.

Kazakhstan chose the stage approach to its strategy as did the Czech Republic, Fiji, Iceland, Latvia, Lithuania, Malta, Marshall Islands. Сarbon neutrality will be achieved both by reducing emissions and by absorbing and capturing. The improvement of the carbon regulation system will ensure the complexity of the transition to carbon neutrality.

Kazakhstan plans to reduce greenhouse gas emissions by 15 percent by 2030. Its commitments also include a fivefold expansion in energy production from renewables from 3 to 15 percent, doubling the amount of energy produced from environmentally friendly sources from 20 to 38 percent and the expansion of the national carbon absorption capacity by planting more than 2 billion trees. A 30-percent reduction in the share of energy generation from coal, from 68.9 to 40.1 percent is also expected.