Counting Down Weeks Until 2022 Presidential Elections in Kazakhstan

2022 has been an intense year for Kazakhstan. Beginning tragically as it did in January, the Nov. 20 presidential elections seem to be the year’s culmination in what officials are now describing as the “reset of the political system.” The public sentiment around the elections diverges. Some expect change for the better from the elections, others do not believe they would make a difference, and, of course, there are people who prefer to stay out of politics, something that is hardly possible these days.

The recent telephone survey of 1,200 citizens conducted by the country’s Public Opinion research institute indicated that 73 percent of eligible voters are ready to head to the polling stations on Nov. 20. Seventy-six percent of the electorate said that they believe in fair elections.

However, 15.9 percent of those surveyed have not yet decided whether or not they will go to the polls. 9.7 percent said they decided not to vote, while the rest had difficulty answering.

When asked about the qualities required of a presidential candidate, most respondents highlighted decency, honesty, higher education and influence among his or her fellow citizens.

The last time citizens voted for a new president was in June 2019, a rightfully historic moment for the country in its own right after First President Nursultan Nazarbayev unexpectedly stepped down in March of 2019. For the first time in the history of Kazakhstan, citizens chose a new president. Tokayev won with 70.76 percent of the vote and his nearest challenger, Amirzhan Kosanov, received 16.2 percent. The latter had not been politically active since then until he announced on Sept. 1 on social media that he would participate in the 2022 elections. But eventually, he did not apply for registration. 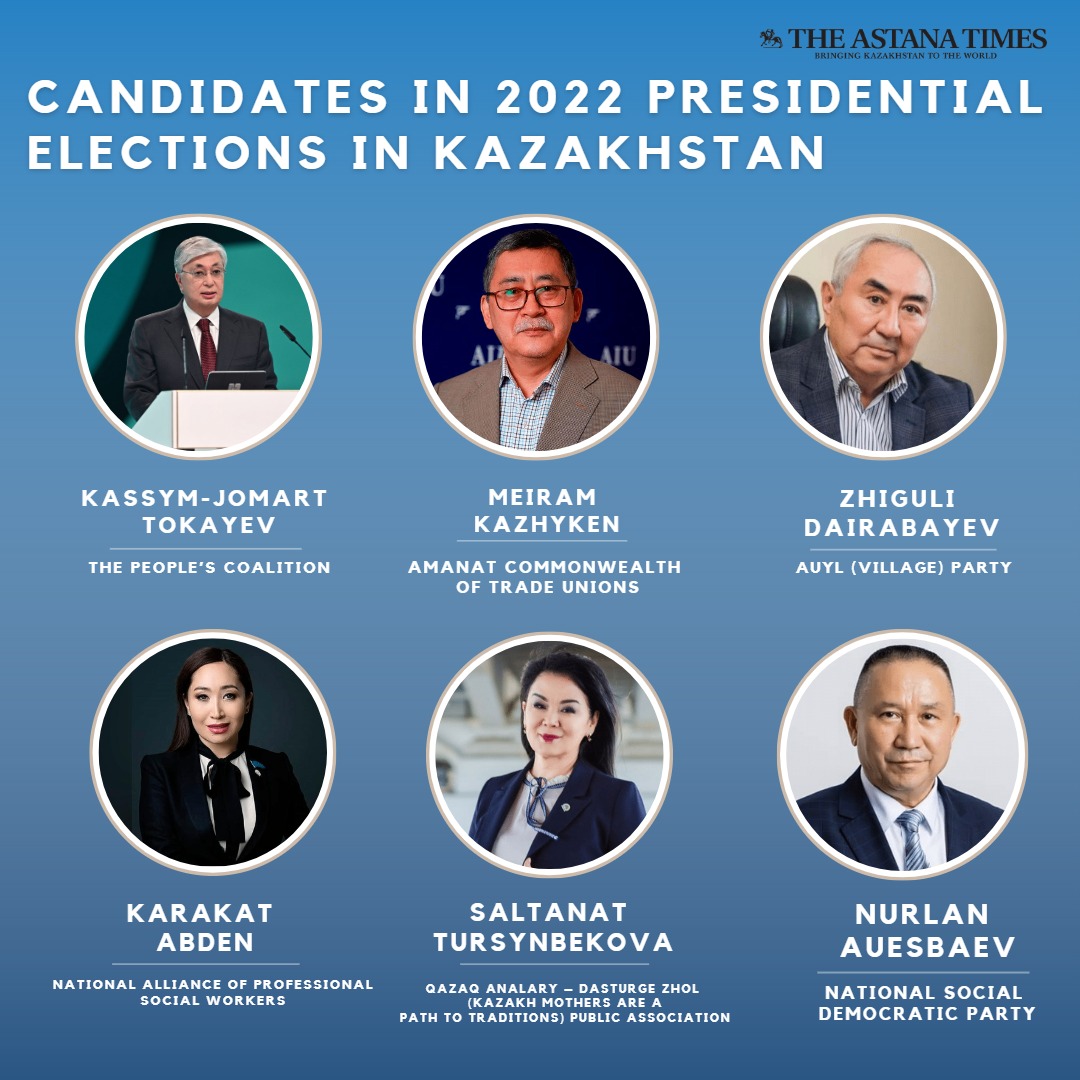 This year’s elections are to take place in a completely different environment, just 11 months after the tragic events of January, amid Ukraine and a challenging economic situation. 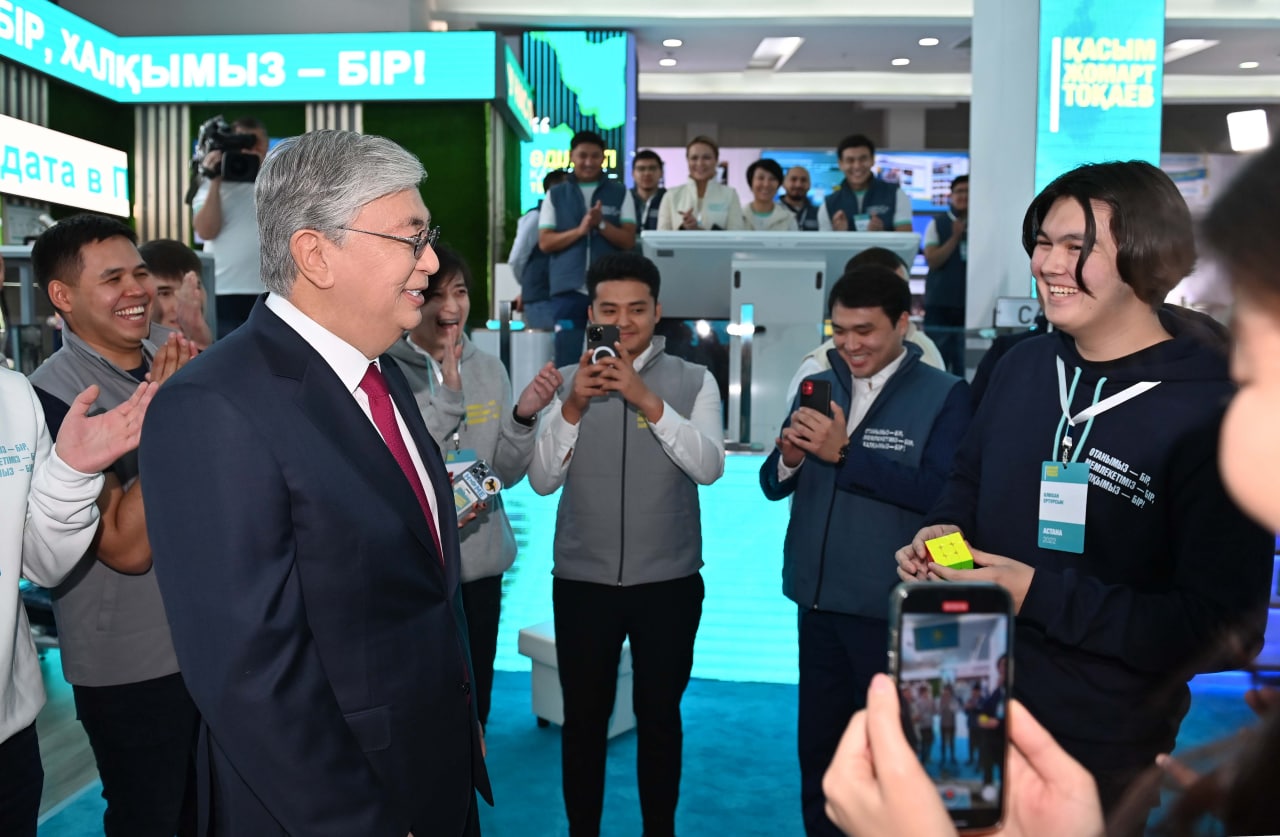 Campaign posters on bus stops and billboards along the main streets in Kazakhstan’s cities started to appear on Oct. 22, as registration of candidates closed at 6 p.m. (Astana time) on Oct. 21.

Tokayev is running on the platform of Just Kazakhstan. His slogan reads, “A just Kazakhstan, for all and for everyone,” something he has been promoting this year along with the New Kazakhstan concept. The public perception of Tokayev has notably changed since he took office in June 2019. Back in 2019, many perceived him as a successor of Nursultan Nazarbayev, who had been in power for nearly 30 years until he stepped down in March 2019. Running for president now, Tokayev seems to stand separately from Nazarbayev’s legacy.

“On the one hand, Tokayev is a strong, experienced trilingual orator and talented publicist, the author of several books, who works on his speeches, articles and messages himself. On the other hand, the president is a stranger to populism and does not try to play with public opinion. But it would be a profound mistake to say that he lives in a parallel reality, as some critics write,” writes expert Daniyar Ashimbayev. 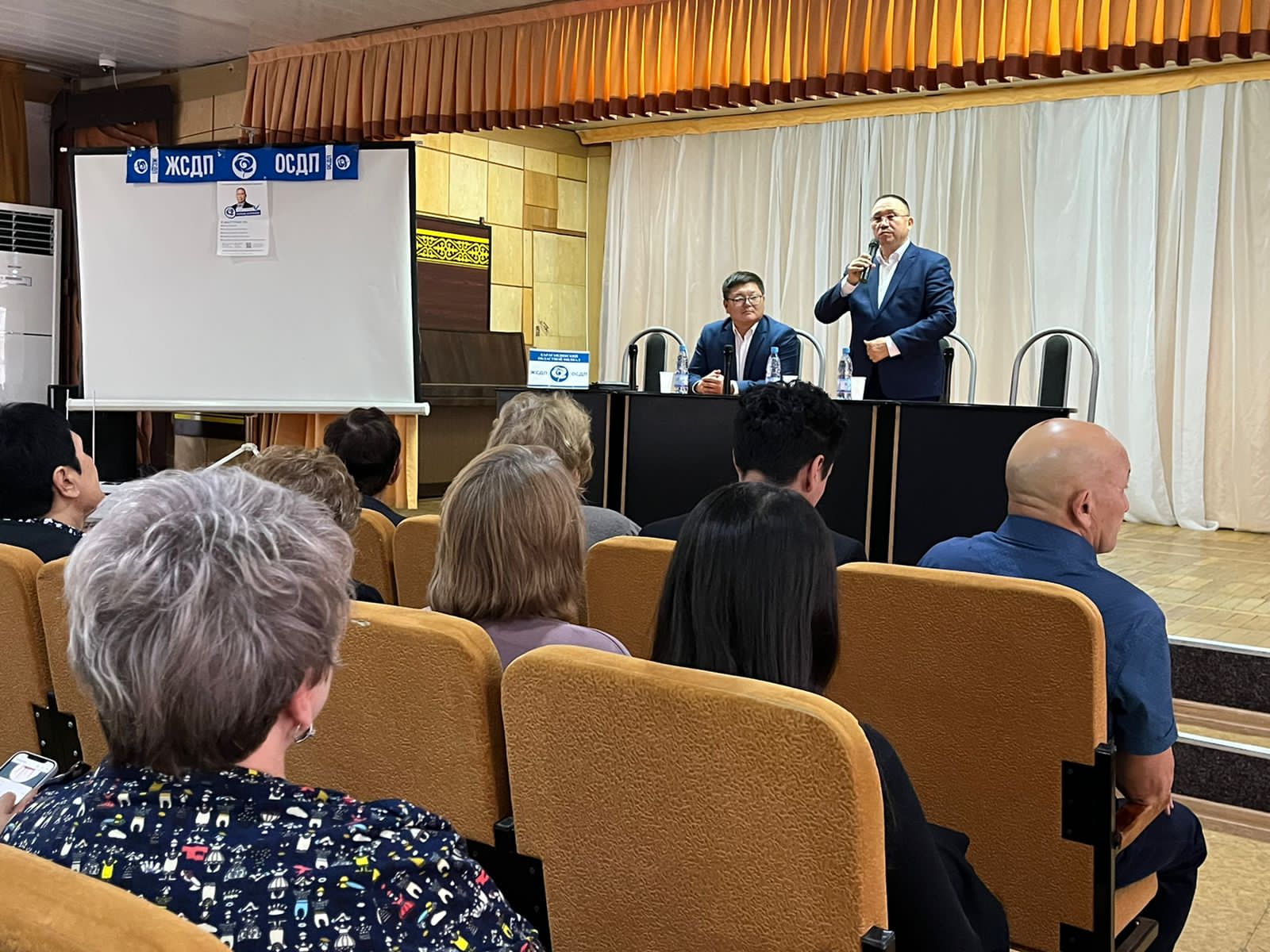 Nurlan Auesbayev during a meeting with the staff of the Commercial College of Karagandy. Photo credit: Auesbayev’s electoral headquarters

Nurlan Auesbayev, head of Astana’s branch of the National Social-Democratic Party, is campaigning for giving power to the people and a free society. “Together, we can achieve real change. Reduce corruption, raise the well-being of all people, and not oligarchs, save our villages from staying idle,” he says.

Meiram Kazhyken, a doctor of economic sciences and head of an Astana-based think tank, said during the opening of his electoral office in Astana that his program is focused on people regardless of age, gender, nationality, religion and social status and is aimed at creating “equal opportunities for all to develop their abilities and implement them.”

Kazhyken visited the East Zhezkazgan mine in Karagandy. Photo credit: press service of his headquarters

Zhiguli Dairabayev, surprisingly, also uses the New Kazakhstan term in his election program. He tries to capitalize on what he describes as the country’s “key national advantages,” meaning the “principles of steppe democracy, high spiritual and moral culture, a strong agrarian sector and strong regions.” The Auyl party, which nominated him for the 2022 elections, campaigns for the interests of the working population and rural residents. The party’s candidate, Toleutai Rakhimbekov, also ran for president in 2019 receiving 3 percent of the votes. 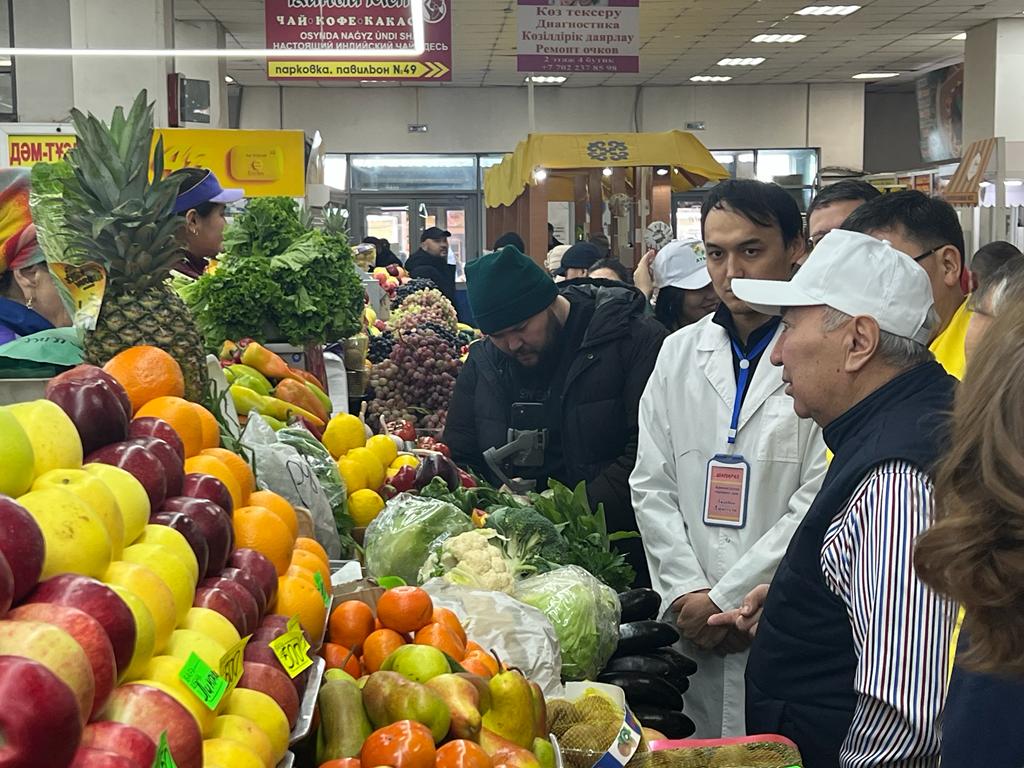 Unlike the 2019 elections with the first woman in the nation’s history running for president, this year’s elections pushed further with two women aspiring for the country’s highest office – Karakat Abden and Saltanat Tursynbekova. 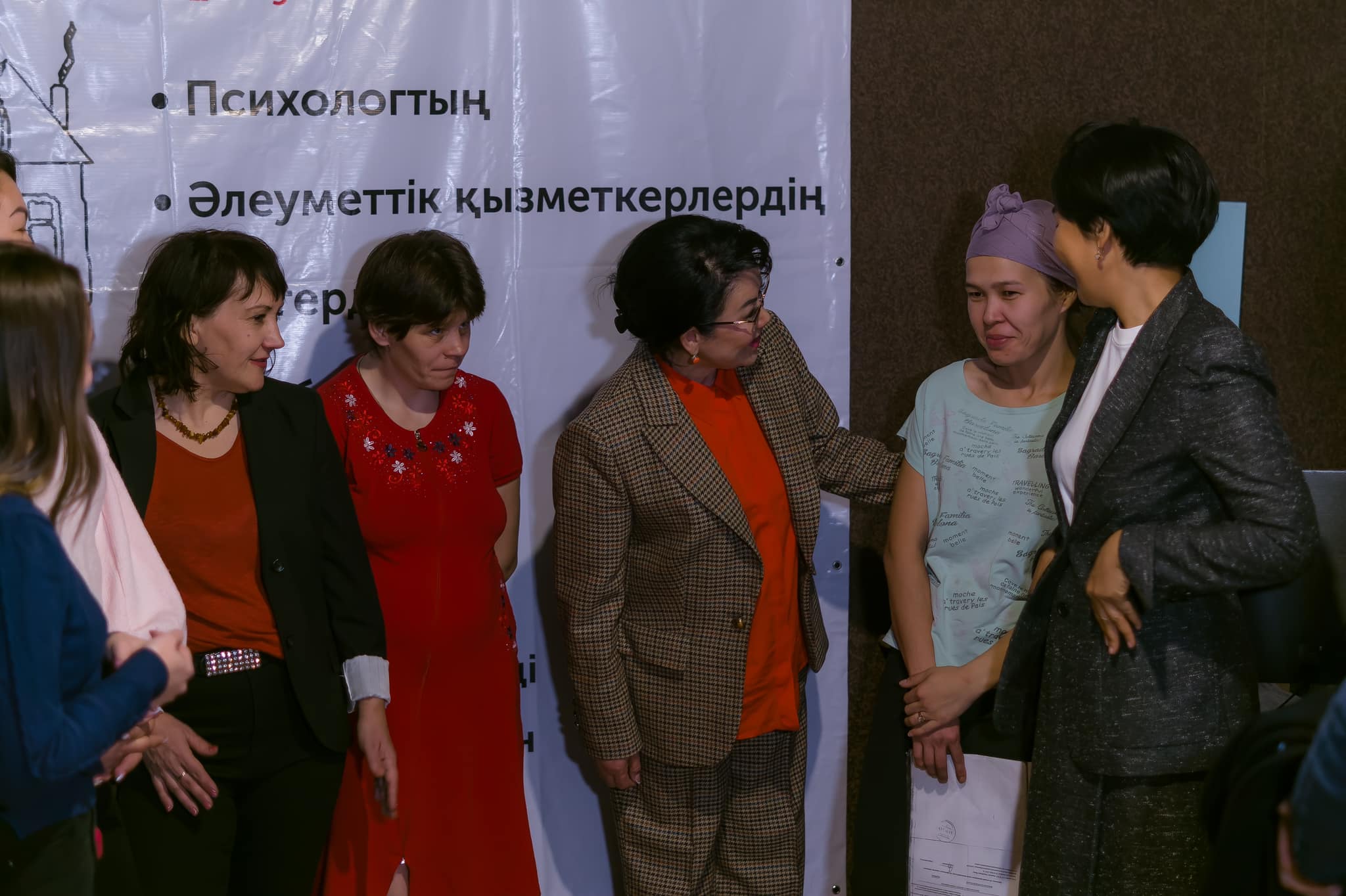 Tyrsynbekova positions herself as a candidate with a strong social agenda. She raises urgent issues for the country, including domestic violence. “The logo, our campaign materials and various visual products are orange. This is the main colour of the election campaign. It is not a random choice. Orange is the color that symbolizes ending violence against women around the world,” reads Tursynbekova’s electoral headquarters statement.

Tursynbekova herself said she stands for “legitimacy and well-being.” “My program is not about empty promises. It takes into account all the aspirations of our people,” she added. 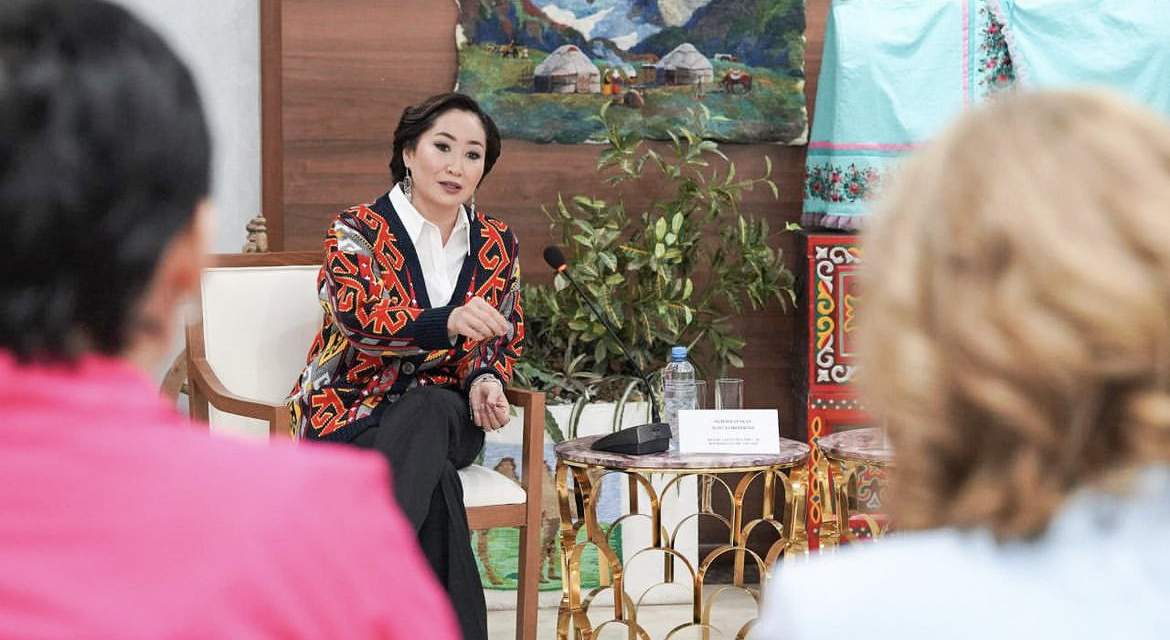 Karakat Abden was also little known to the public until she published a controversial book in 2019 titled “You are a Kazakh girl. Be proud of it!” devoted to the role of girls in contemporary Kazakh society, which back then drew significant public criticism.

Her campaign also capitalizes on the proposed social agenda. “I looked at all issues as a woman, as a mother, as a child of the Kazakh people. I looked at each issue from the point of view of national values,” she said when asked how her election program was developed.

Discussions about elections seem to be omnipresent, especially in the big cities of Astana and Almaty. Experts also highlight the challenging circumstances in which elections will be taking place.

“If the previous presidential elections were in the context of a transition of power, this year’s elections are a transition to a new period in the process of political transformation in the country,” said Olzhas Beisenbayev, an expert at the Kazakhstan Institute of Social Development.

Beisenbayev noted that the creation of a new political culture would be more evident once the new Parliament embarks on its mandate next fall. “I think that both society and the state are interested in that,” he said.

In the meantime, candidates continue to travel across Kazakhstan, introducing their electoral programs. They are also set to appear on TV debates on Nov. 11.

Author is Assel Satubaldina, Senior Editor of The Astana Times