By Saniya Bulatkulova in Society on 24 September 2022

ASTANA – The evening of Sept. 21 was memorable for Kazakh social media users as numerous photos and videos showing an amazing celestial body in the sky went viral and drew everyone’s attention, as the Soyuz-2.1a spacecraft was launched with the manned spacecraft Soyuz MS-22 from the Baikonur Cosmodrome at 7.55 p.m. local time (GMT+6) as part of the agreement on cross flights between Russia and the United States. 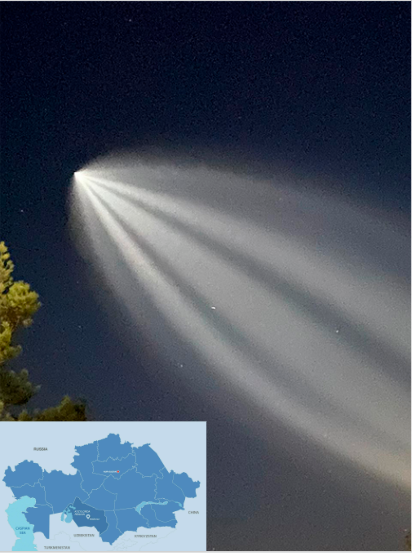 The so-called “jellyfish” is a light and optical effect that occurs during rocket staging. The crew, which consists of two Roscosmos cosmonauts Sergey Prokopiev and Dmitry Petelin with NASA astronaut Francisco Rubio, reached the International Space Station (ISS) in three hours. The crew will remain on the ISS for 188 days.

Being a native of Kazakhstan’s Kostanai city, 39-year-old Dmitry Petelin has been a Russian cosmonaut since 2012.