By Staff Report in Nation on 5 September 2022

NUR-SULTAN – The Kazakh Ministry of Agriculture announced that the forest fires in the Kostanai Region will not affect the country’s food security, the projected yield, and the export agreements with foreign states, reported the ministry’s press service. 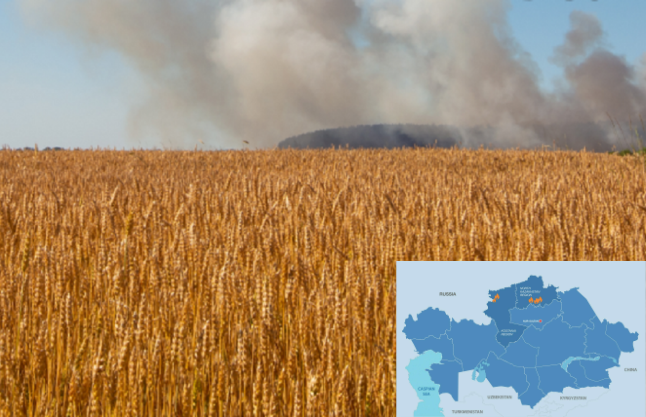 Forest fires had a minor impact on grain crops in the Kostanai region. Photo credit: Kazinform

The natural disaster has affected less than 0.1 percent of the total area of crops in the region, which is 5.3 million hectares.

Kazakh Prime Minister Alikhan Smailov instructed the ministry and the regional akimat (administration) to provide necessary assistance to affected farmers and owners of personal subsidiary farms at the Sept. 4 meeting on the elimination of the forest fire consequences.

According to the ministry, crops were damaged by the forest fires, but insignificantly. The fire in the Karabalyk district affected nearly 15 hectares of grain crops and two hectares of flax crops. As for the Mendykarinsky district, the fire destroyed its one-hectare grain harvesting area.