ASTANA – An exhibition drawing on the international experience with nuclear testing and armaments, titled Everything You Treasure – For a World Free From Nuclear Weapons, opened in Astana in the Keruen shopping center on Sept. 16. 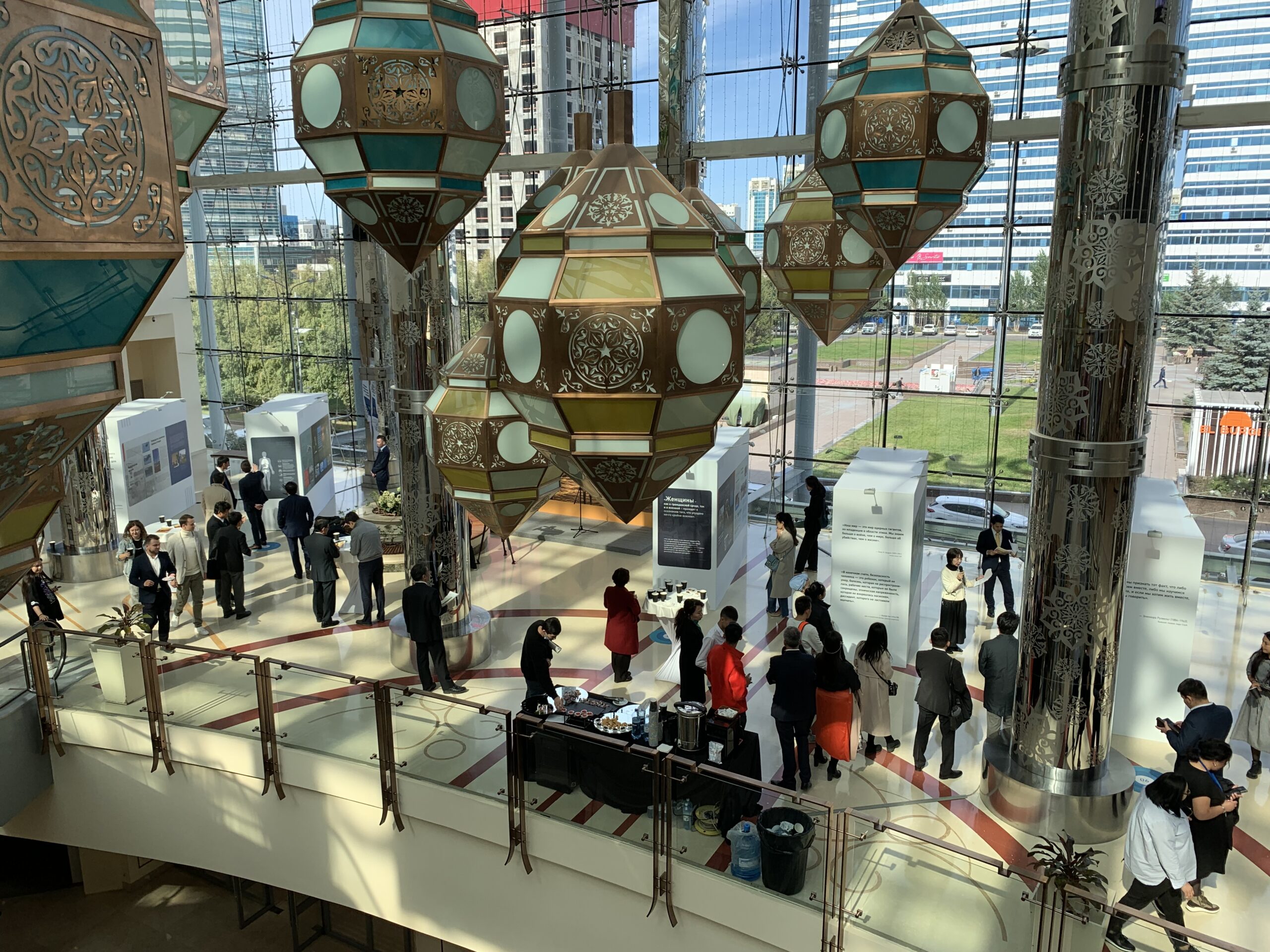 The exhibition drawing on the international history of nuclear testing and armament will be open on Sept. 16-30 in Keruen shopping center. Photo credit: astanatimes.com

The exhibition, which runs until Sept. 30, depicts over 70 years of nuclear history from the Hiroshima explosion to today through photographs, illustrations, and graphs that show the devastating effects of nuclear weaponry on communities.

“What do you treasure in your life?” – the guide asks to begin the exhibition with that question in mind. As the tour proceeds, the exhibition tries to answer questions on whether nuclear weapons really protect what we hold dear, what are the problems caused by nuclear weapons – humanitarian, environmental, medical, and economic – as well as what we want our future to be.

“The only guarantee that nuclear weapons will never be used is their complete elimination,” said Alimzhan Akhmetov, director of the Center for International Security and Policy, opening the exhibition.

“What can we do about it? I am convinced that the answer to this question lies in education. Only through the dissemination of knowledge about the horrendous effects of weapons can the formulaic view of the problem and the narrowness of national interest be removed,” he said in hopes that the exhibition will help to communicate the magnitude of what could happen as a result of the nuclear stockpiles. 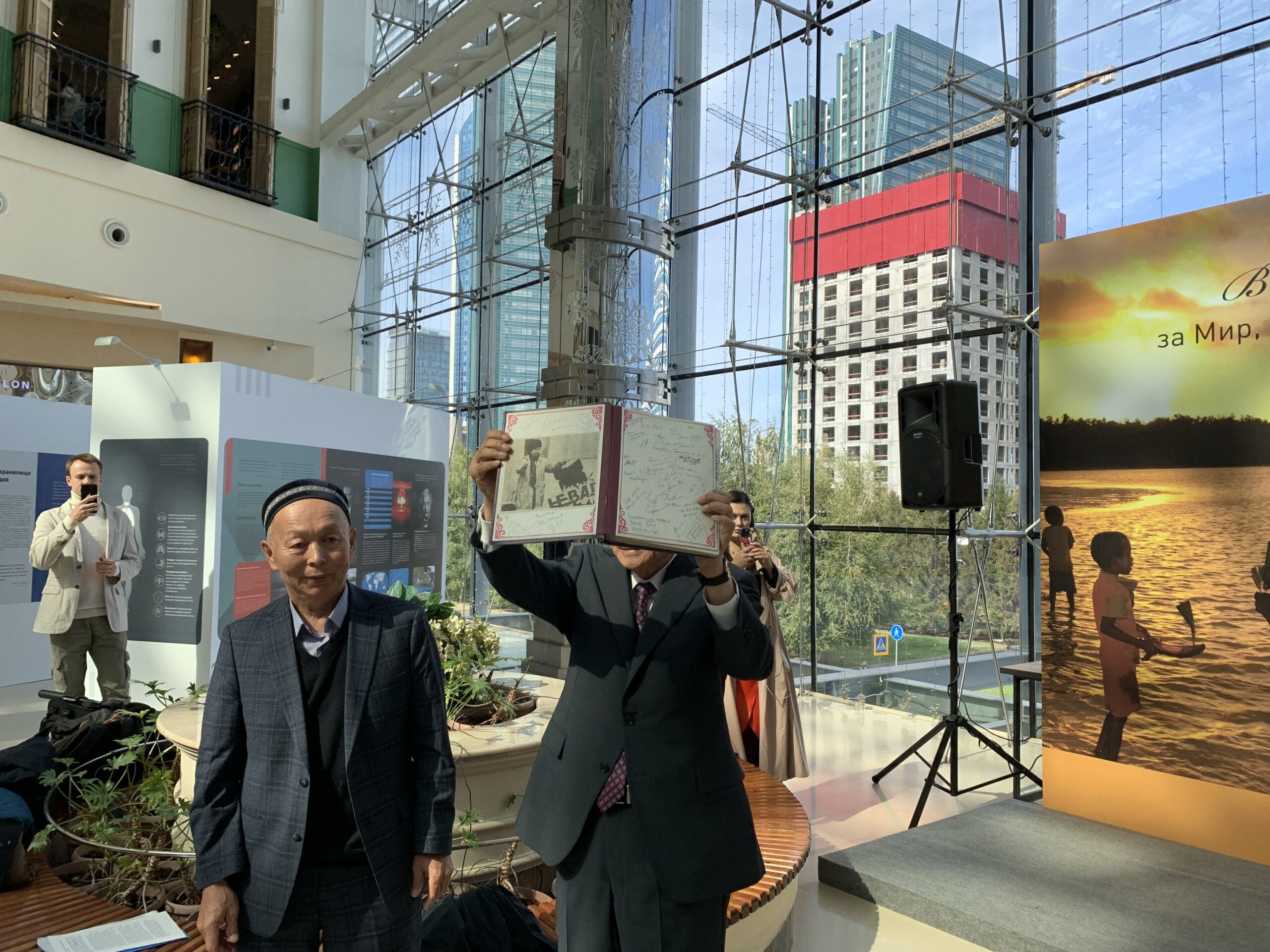 Bolatbek Baltabek, a 63-year-old second-generation victim of nuclear tests and Nevada-Semipalatinsk International Anti-Nuclear Movement activist, also spoke at the event about the tragic consequences of the nuclear tests on him and his family.

Baltabek was a child when the Soviet Union tested the atomic bomb near his home village Sarzhal in eastern Kazakhstan, in what came to be known as Semey polygon.

“In the summer house where I lived, my parents lived in one room, and in the other room lived military men who came to conduct a range of nuclear tests,” he said.

As children, they used to be very happy when the military came but they did not know what they came for, said Baltabek. Soon, more of his fellow villagers began to die prematurely. The villagers could not think of the cause of those sudden deaths, so they called it a “polygon disease.”

He is right to draw attention to the aftermath of the tests that affected several generations further. “Diseases that emerged from the tests began to appear among the generations who have not seen the landfill explosions. My granddaughter is on the list of people with disabilities due to blood disease,” said Baltabek.

The Soviet Union conducted more than 450 nuclear tests from 1949 until 1989 at the Semey polygon in the eastern part of Kazakhstan. In 1989, an anti-nuclear movement called Nevada-Semipalatinsk was initiated by poet and social activist Olzhas Suleimenov with a mission to close the Semipalatinsk test site and to inspire other nuclear countries to follow this example.

In 1991, First President Nursultan Nazarbayev signed a decree on the closure of the Semey polygon.

The Japanese Soka Gakkai international non-governmental organization (NGO) that promotes peace, culture, and education, organized the exhibition along with International Campaign to Abolish Nuclear Weapons (ICAN), and the Kazakh Center for International Security and Policy NGO.

The exhibition was first shown in Hiroshima, Japan in 2012 and has since been shown in more than 90 cities in 21 countries around the globe.