By STAFF REPORT in International on 16 August 2022

NUR-SULTAN – The Kazakhstan pavilion won the best implemented project in the field of construction in the restoration and adaptation of a cultural heritage site category for modern usage at the Exhibition of Achievements of National Economy in Russia (VDNH),  reported the press service of the Kazakh Embassy to Russia on Aug. 12. 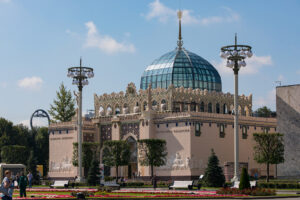 Following a large-scale restoration of its historical appearance from the mid-twentieth century, Kazakhstan’s pavilion at VDNH reopened at the end of 2021. It was named a laureate in the Moscow Government’s Moscow Restoration – 2021 competition in December, and in July, it earned the VDNH Gold Sign for its contribution to restoration and active integration into the event agenda.