By Saniya Bulatkulova in Kazakhstan Region Profiles: A Deep Dive Into the Heart of Central Asia on 21 August 2022

NUR-SULTAN – The Association for the Conservation of Biodiversity of Kazakhstan (ACBK) recently published a video on its Instagram, where a baby eagle feeds on prey brought to it by its parents, reported the Kazinform agency. 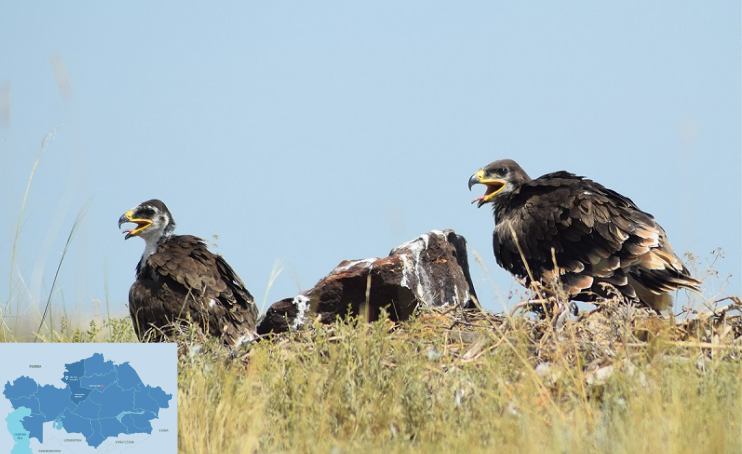 Unlike many other species, steppe eagles build their nests on the ground and in rare cases – on low trees or hills. Photo credit: ACBK. Click to see the map in full size

The video was shot this summer in the Alty-Sai eco-park in the southern part of the Kostanai Region, where a pair of steppe eagles managed to breed in an artificial nest.

According to the ACBK’s press service, the organization’s experts experimentally installed 35 platforms for the nesting of steppe eagles last year with the aim to help birds safely spend the breeding season in the local steppes.

“In 2022, during the inspection of installed nesting platforms, two nests were found on them. In July, one fledgling was found in each of the nests. Two occupied platforms out of 35 can be considered a successful outcome for the first year, and we will continue to assess the effectiveness of such an approach in the conservation of birds of prey”, said eco-park’s director Alexey Timoshenko.

Before the installation of artificial platforms, there were 20-25 natural eagle nests in the eco-park, but they are often destroyed due to fires, heavy rains, and sometimes because of livestock. Terrestrial predators such as foxes, corsac foxes, wolves, and even some birds can easily devastate nests that are made on the ground.