NUR-SULTAN – From asking about meeting men’s singles champion Novak Djokovic, to questions about her citizenship and whether her emotional calmness helped her win the final – the press lobbed curious questions to Elena Rybakina, the first Kazakh player to win the Wimbledon women’s singles final, during a press conference on July 12. 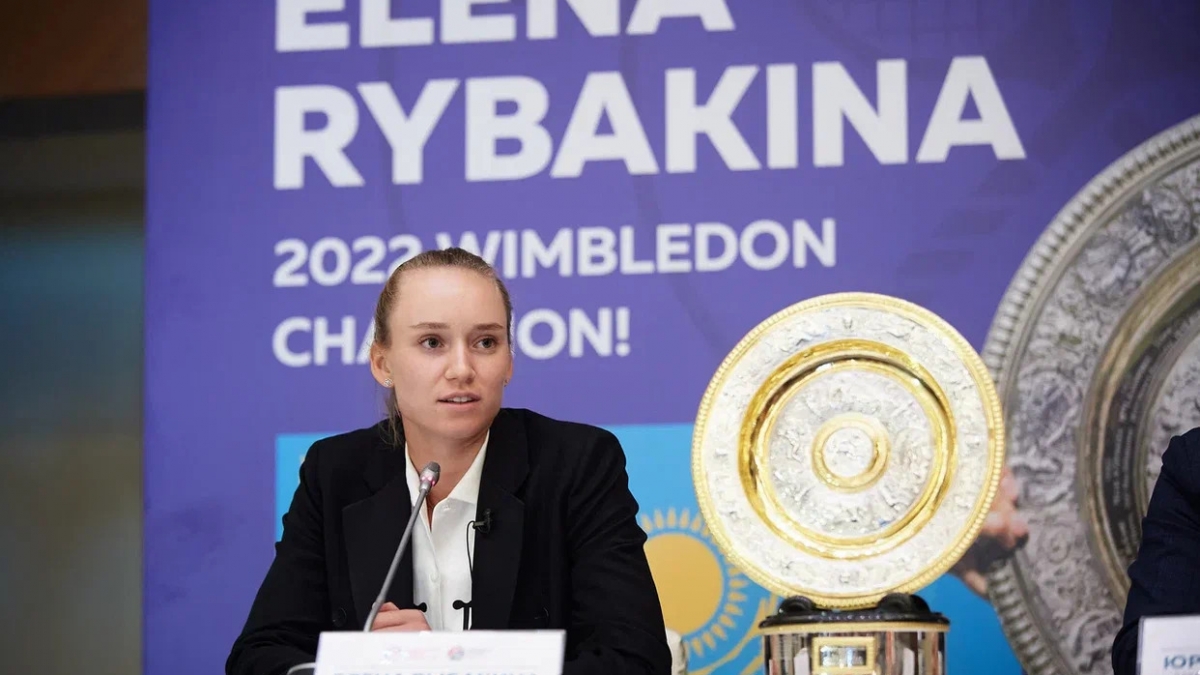 Elena Rybakina during the meeting with press in Nur-Sultan. Photo credit: ktf.kz

Rybakina became the first tennis player from Kazakhstan to win the Wimbledon Championship after defeating Ons Jabeur of Tunisia in three sets 2-6, 6-3, 6-3.

During the press conference in Nur-Sultan that followed Rybakina’s triumphant win, she was asked what was the most difficult match during her play.

“All the matches were quite difficult. One of the most difficult was, of course, the final, because I was terribly nervous for the last two days and did not sleep well,” said Rybakina.

“In the first set I didn’t exactly show my best game. I think it was just the emotions. But then I was able to cope with them. The second and third sets I played a little bit better, although my opponent was not easy. She plays very unorthodox and difficult,” she added.

Rybakina also addressed predictable queries about her Russian origin and adoption of Kazakh citizenship back in 2018.

“At that moment, which was almost five years ago, it so happened that I had an acute question: what to do next? I was about 17-18 years old. I had to decide whether I would try to play and stay in professional sports or go studying,” replied Rybakina.

She highlighted that she was very lucky to receive an invitation from Kazakhstan after successfully playing at her first tournament.

“We found each other, and at the end of the day I am very happy that my journey continues exactly with Kazakhstan. The history is happening together thanks to Kazakhstan. Thank you very much for your support,” said Rybakina.

She also said that she was a junior when she moved to Kazakhstan’s national team and, in her opinion, “The transition from juniors to an adult professional career is very difficult. Besides the fact that you have to have a good team around you, not everyone is able to continue at the professional level and only a few people reach the top. I’ve been very lucky in that respect,” said Rybakina.

Earlier, Rybakina announced that she was going to allocate part of the prize money to charity.

“First of all, of course, I would like to help the juniors, most of it (money) will go to them. And the second important point for me: I was at the shelter, and I was very much moved by it, so I would like to allocate money for the animal shelter,” she said.

Answering the question, about what it was like to meet Djokovic, who won his fourth consecutive Wimbledon crown and his 21st overall Slam title, Rybakova said that he remembered visiting Kazakhstan. “Novak noticed how good our tennis centers are, they are world class. When he came to Kazakhstan, he was very surprised. I talked to him a little and took some pictures. I will have very good memories about it, but now it’s all like a blur,” said Rybakina.

Among her immediate plans is to prepare for the tournaments coming up in the United States. “There are quite a few games, almost every week, and not a lot of time. The main tournament is, of course, the last Grand Slam of the year,” she said.