Kazakh and German Economies Complement Each Other, Says German Ambassador to Kazakhstan

NUR-SULTAN – In February, Kazakhstan and Germany marked 30 years since the establishment of diplomatic relations, an important milestone in their bilateral ties. The Astana Times spoke to Ambassador of Germany to Kazakhstan Monika Iwersen to learn about the key milestones achieved over these years and prospects for moving forward. 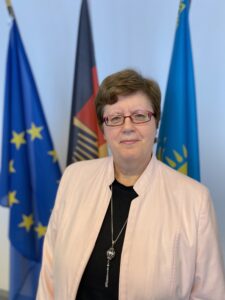 Before being appointed to Kazakhstan in September 2021, Iwersen served for four years as the Ambassador in Kyrgyzstan. “I am not new to the region,” she told The Astana Times.

As the two countries mark the 30th anniversary of diplomatic relations, there is a special bond that connected them well beyond this span of time and it is the significant German diaspora. In the 1940s, nearly 450,000 Volga Germans were deported to Kazakhstan and before the collapse of the Soviet Union, there were around one million ethnic Germans living in Kazakhstan. Many of them moved to Germany in the 1990s, while around 200,000 still make part of Kazakhstan’s diverse ethnic composition.

She noted that Germany was not only among the first to recognize the newly independent state of Kazakhstan but also to establish an embassy that opened in December 1992 in Almaty.

The support Germany has provided to Kazakhstan since 1991, according to Iwersen, was multifaceted from development cooperation in the first years to strong economic partnerships in the later years.

“You have people-to-people contact. I hear about so many marriages between Germans and Kazakhs. You have the students with the scholarships or with their own resources [studying in Germany]. You have work and exchange programs, and universities that cooperate. I think over time you have such a close network of people who have had experience, either Germans here or Kazakhs in Germany, that is another element to the strong networks that we have. Over time, this builds trust and knowledge about each other, and there can always be more,” said Iwersen.

The diplomat commended the economic ties, emphasizing that the economies of Germany and Kazakhstan complement each other.

The recent Kazakh-German business forum demonstrated the huge interest of German companies in Kazakhstan, bringing more than 60 delegates from Germany, the biggest delegation since the outbreak of the pandemic.

“I would say that we do see a certain new dynamic now and that has to do, of course, with the reforms that were announced after the January events. At the forum that we had, there were more than 60 representatives of German companies. It was a very mixed group – those who were already investors here, others who are curious to see opportunities and to know more, and a third group, because of what we call geopolitical developments, are looking for a presence in Central Asia as well,” said Iwersen, stressing the investors feel a “new openness and a new dynamic in the talks.”

She is optimistic about the trade prospects. More than 900 German companies work in Kazakhstan.

“The general trend we can see in our bilateral trade is that the numbers are up, and we have to see at the end of the year how much of it is an increase in the volume of goods exchanged or if it is due to the fact that a large percentage of what we receive from Kazakhstan is oil and gas and the prices have been increasing. So that might push the trade figures, the prices, and the numbers up without pushing up the quantity. But my guess would be for 2022, we are going to see a significant increase because if you look at the new numbers they have increased by 25 percent from 2020 to 2021. So I think we see the post-COVID effect and the renewed mutual interest,” said the ambassador.

When asked about the potential impact of the Western sanctions imposed against Russia on Kazakhstan, Iwersen was firm to point out there would be no significant effect.

Iwersen said Germany supported Kazakhstan’s sweeping reform agenda. She commended Kazakhstan’s will to accelerate the reforms following the tragic January events, not the opposite.

“In some parts of the world, there would be a tendency to crack down and to become stricter, yet, to the contrary, you are trying to establish reforms and open up in many areas and go in the opposite direction. I think that’s remarkable in itself. We very much respect that approach,” said the ambassador.

She expressed hopes for the media law to be reformed in Kazakhstan to allow more freedom of the press and encouraged a greater focus on human rights protection. Iwersen mentioned the important role of the Federal Constitutional Court in Germany, noting that as a result of the June 5 nationwide referendum the Constitutional Court would also be re-established in Kazakhstan.

“As you may know, the Constitutional Court is the institution which Germans trust most in our country. It can be an important factor in people’s lives and in assuring people’s rights. I would be very interested in seeing how that plays out here. And we certainly have a lot of expertise that we could offer as well,” she said.

The nature of the German investments in Kazakhstan is unique, as more than 80 percent of the investments are in the non-resource sector driving the country’s efforts toward economic diversification and a green agenda, particularly relevant for Kazakhstan that pledged to achieve carbon neutrality by 2060.

“I know it is a challenge, particularly for those countries whose economy is very heavily focused on fossil fuels. That is one of the reasons why Germany, through the GIZ [German Agency for International Cooperation], has supported Kazakhstan in formulating its decarbonization strategy, which is still being finalised at the moment,” she said.

German companies are also active in Kazakhstan in developing renewable energy sources. One of the biggest projects comes from the Svevind company to build a green hydrogen plant in the Mangistau Region.

“For us in Germany, it is a sort of the solution to many of our challenges in terms of phasing out oil and gas and using gas as bridging energy for a while, while fully transitioning to renewable energies. We will need a lot of green hydrogen in the future, and we will not be able to produce all of that power locally in Germany. We are on the lookout for partners in the world. This is a project that would make a lot of sense with Kazakhstan because all the conditions are there in terms of wind, solar, and water energy,” said Iwersen.

Besides this, German companies are also eager to provide expertise in renewables and energy efficiency, which are key for decarbonization.

To mark the 30 years of diplomatic relations, the embassy has recently organised a contest where participants were asked to share their views on what bilateral cooperation between Kazakhstan and Germany would look like in 2052. The embassy also plans a big pub quiz to see what people know about Germany, as well as a movie week, and a youth football tournament in the fall.

Many young people in Kazakhstan choose Germany as a destination to pursue their higher education or learn the German language. Some start as early as third grade in one of the 15 PASCH (Schools: Partners for the Future) partner schools in Kazakhstan.

The German Academic Exchange Service (DAAD) provides opportunities for scholarships to nearly 100 Kazakh students each year and the German-Kazakh University in Almaty is offering quality education in various fields, in cooperation with German universities.

“Quite a few of them have ties to Germany or a good impression of Germany. That facilitates my work as well. It is a pleasure to be an Ambassador here,” said Iwersen.