Environmental issues, which are extremely relevant today, have become more pronounced due to the increasing energy demand and population. Environmental problems have been aggravated by globalization, prompting leading policymakers and all stakeholders to take action within economic, social, and political frameworks. Each country has set ambitious goals to tackle environmental challenges but how will the global system merge with them? 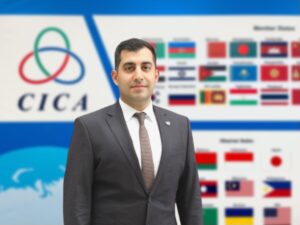 The Environmental Dimension of the Conference on Interaction and Confidence Building Measures in Asia (CICA) has three priority areas, including sustainable development, environment protection, and natural disaster management, focusing on the environmental theme in a broader framework.

In the past, the Industrial Revolution accelerated environmental pollution. The use of fossil fuels has had a negative impact on the environment over the years. During the 1973 Yom Kippur War, the sustainability of fossil fuels was called into question, which led to the increased use of renewable energy sources over the years. The use of renewables, which has been actively promoting green transformation in recent years, shapes national policies. For instance, CICA Member States, such as China, Türkiye, India, and Korea, are revising their renewable energy investments with policies focused on green transformation.

The CICA Member States, which are seriously exposed to environmental problems, are taking different measures to ensure their sustainable development and environmental protection. In general, the main environmental challenges in Asia include desertification, climate change, shortage of water resources, deforestation, earthquakes, and forest fires.

The term “sustainable development” was first introduced by the United Nations in 1987 in the Brundtland Report, also known as Our Common Future. The report, which focuses on addressing economic, social, and environmental problems, identifies ways to ensure the present and future development. In practice, this can only be achieved through innovation by using natural resources efficiently and without harming the ability of future generations to meet their needs. The 17 Sustainable Development Goals (SDGs), which were enacted by the United Nations in 2016, aim at the development of countries by 2030, primarily in the context of sustainability in terms of economy, environment, and social aspects.

The analysis of SDG progress of the CICA Member States showed that Korea ranks 28th among 193 UN countries and is the leader among 27 CICA Member States when it comes to implementing the SDGs. Israel ranks second among CICA countries and 38th in the world. Other Member States have the following rankings globally and within CICA, respectively: Thailand 43 (3), Kyrgyzstan 44 (4), Russian Federation 46 (5,) Vietnam 51 (6), Azerbaijan 55 (7), China 57 (8), Kazakhstan 59 (9) and Türkiye 70 (10).

In recent history, along with the sustainable development goals that concern the whole world, including the CICA Member States, there have been major developments in the context of the environment. Actions listed in chronological order include the Kyoto Protocol (2005), Paris Climate Agreement (2016), the United Nations Climate Change Conference 2021 (COP26). The aim of each progress is to create a strong and stable structure to combat climate change. In light of these developments, the linear economy has also started to be questioned.

Recently, the COVID-19 pandemic has shown the whole world that many elements of the ecosystem must change. Transition to a circular economy will alleviate the environmental and human health problems caused by current linear economy systems. However, it will require massive changes to production and consumption systems that go far beyond resource efficiency and waste recycling. At this point, the adequate planning of sustainable development according to the needs of countries can contribute greatly to the transformation of the system. While ensuring this transformation, countries need to focus more on energy efficiency. In the light of sustainable development, it is inevitable that the transformation will include energy efficiency in short and medium-term planning.

The whole loop consists of a chain linked together. To achieve a sustainable and livable environment one needs to start raising awareness. For example, carrying out studies to reduce loss rates in electrical energy transmission and distribution; supporting behavior change to reduce excessive energy consumption in public buildings, industry and public lighting; focusing on energy efficiency in buildings; activating energy storage systems to ensure on-site consumption of renewable energy resources; developing policies by conducting infrastructure studies to increase the use of electric vehicles.

Although sustainable development and environmental planning can contribute to the green transformation, raising public awareness is equally important as far as the Environmental Dimension is concerned. The progress of all stakeholders in line with the common goal is the crucial part of the chain.

The aforementioned analysis of the CICA Member States has indicated that desertification is one the major environmental problems. These problems are especially relevant for landlocked countries. Adverse effects from environmental challenges put countries in a difficult situation. For example, food security; health issues like skin irritation, respiratory disorders; social, economic and political tensions. From an economic point of view, migration is snowballing due to poverty. Comprehensive security and normal interstate relations, which are considered as main CICA goals, are vital in this geography.

The analysis of some environmental policies of the CICA Member States suggests that, for instance, about 90 percent of Mongolian grassland is susceptible to desertification. Therefore, Mongolia has launched a national campaign to plant 1 billion trees by 2030. Whereas Kazakhstan has developed a reforestation policy to plant 2 billion trees by the end of 2025. Moreover, India plans to plant enough trees by 2030 to absorb an additional 2.5-3 billion tons of CO2 from the atmosphere.

Carbon emissions have become a serious indicator when examining the Environmental Dimension of countries. For example, China, India, Russian Federation, Iran, and Korea are the five countries with the highest emissions among the CICA Member States. High population and increasing energy demand affect carbon emissions, but innovation, advanced technology and efficiency are the issues to be considered at this point.

The number of events of the CICA Environmental Dimension, introduced in 2011, continue to grow every year as nations become more aware of sustainable development, environment protection, and natural disaster management. Speaking at the International Green Technologies and Investments Center in partnership with the Association of Environmental Organizations of Kazakhstan, Conference on “Development of Green Technologies and Renewable Energy Sources in the Context of Low Carbon Development,” which was held online in November 2021, CICA Executive Director, Ambassador Kairat Sarybay stated that environmental issues were on the CICA agenda and underlined that climate change, caused by the emission of pollutants into the atmosphere, had serious environmental and economic consequences for the world, and as a result had implications on security in its broader sense.

The Environmental Dimension is one of the central agenda items that is important for all countries. Celebrating its 30th anniversary this year, CICA will take the first steps to transform into an international organization at the upcoming Sixth CICA Summit in October 2022 in Nur-Sultan. This development will be an imperative first step for the entire world and especially for Asia, because CICA is a unique organization that can bring all countries together thanks to its inclusive and multilateral structure. The Environmental Dimension with its comprehensive, multidimensional approach and priority areas can set a good example for all Member States and the rest of the world.

The author is Dr. Ugur Turan, Expert on the Environmental Dimension of the CICA Secretariat on confidence building measures. He worked in China, Türkiye and as a researcher on international organizations’ projects.