By Saniya Bulatkulova in Culture on 10 July 2022 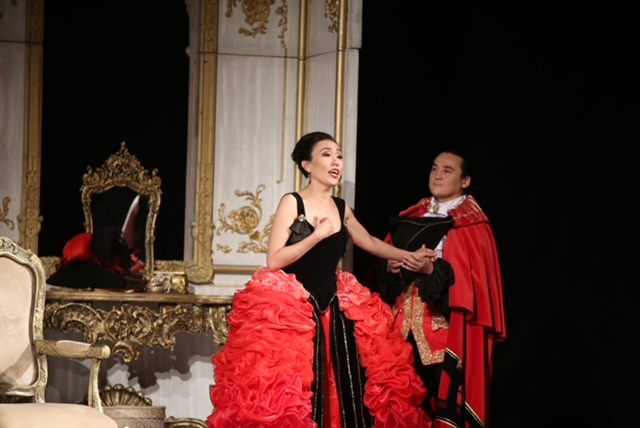 Astana Opera House’s soloists during one of their performances at the festival. Photo credit: Astana Opera theater

Even though the theater’s team had to present Gioachino Rossini’s “The Silken Ladder” one-act operatic farca comica at the stage of Pogodin Russian Drama Theater due to weather conditions, the guests were deeply impressed by the artists’ skills.

“Unfortunately, not so many people, especially the younger generation, now listen to classical music, while opera still remains something magical and incomprehensible. Today’s performance by the Astana Opera orchestra and soloists lifted the veil into the world of high art,” said city resident Yelena Kolyuzhnaya, who attended the final gala concert.

Kolyuzhnaya said that “the enchanting music awakens hidden emotions and makes eyes tear up with excitement,” expressing gratitude to the talented musicians and soloists.

According to theater’s conductor and Honored Artist of Kazakhstan Abzal Mukhitdinov, the gala concert featured arias and duets from operas by Kazakh and foreign composers, as well as popular classical music.

Soloists of the theater brightened up the fest’s final day with their performances of the most famous opera compositions, including Habanera aria from Georges Bizet’s “Carmen,” aria of Don José from “Carmen,” verses of Escamillo from “Carmen,” a barcarolle from Jacques Offenbach’s “The Tales of Hoffman,” and “Funiculì, Funiculà” song by Luigi Denza among others.

Speaking about the goals of theater’s participation in the festival, Mukhitdinov noted opera popularization among the country’s citizens who do not have the opportunity to attend the opera theater and the promotion of the theater and its talented artists.

The video was published on Instagram account of Culture, Archives and Documentation Department of North Kazakhstan Region