By Staff report in International on 7 June 2022

NUR-SULTAN – Kazakhstan and Saudi Arabia seek to strengthen economic and investment cooperation. This was announced during the meeting between Kazakh President Kassym-Jomart Tokayev and Minister of Foreign Affairs of Saudi Arabia Faisal bin Farhan Al Saud, who paid an official visit to Kazakhstan on June 6, reported Akorda. 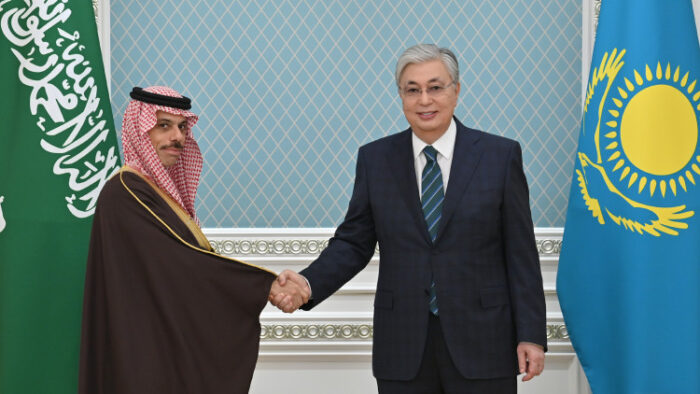 Saudi Arabia is one of Kazakhstan’s major partners in the Arab and Islamic world.  “Our countries have been consistently developing political dialogue in the spirit of friendship and mutual trust based on shared values. I would be very glad to continue maintaining fruitful cooperation with the Custodian of the Two Holy Mosques, King Salman bin Abdulaziz and Crown Prince Mohammed bin Salman,” Tokayev said.

The joint projects in the agricultural, petrochemical, tourism, mining and metallurgical and financial areas were all on the agenda.

It is expected that the Kazakh delegation will visit Riyadh to conduct negotiations on trade, economic and investment cooperation in the near future.

Faisal bin Farhan Al Saud expressed the greetings of the King of Saudi Arabia and the Crown Prince to the President and the Kazakh people.

“The Kingdom of Saudi Arabia wishes every success to the Second Republic and to continuing the journey of reforms under your leadership aimed at the prosperous future of Kazakhstan,” he said.

Faisal bin Farhan Al Saud also supported the initiative on hosting business meetings with Kazakh partners and the organization of a summit in Kazakhstan in the future.

It was reported that Kazakhstan plans to send a trade mission to Saudi Arabia to conduct negotiations with officials and entrepreneurs during the meeting between Kazakh Prime Minister Alikhan Smailov and Faisal bin Farhan Al Saud.

“Saudi Arabia is an important partner of Kazakhstan in the Middle East. We see positive dynamics in mutual trade, but its current volume does not correspond to the real potential. In this regard, we consider it important to establish close ties between the business communities of our countries,” Smailov said.

It was agreed that cooperation in trade and investment spheres would be increased. Interregional cooperation, interaction in the transport, logistics and energy sectors, and food security issues were also discussed.

The results of the fifth Meeting of the Intergovernmental Commission and the Kazakh-Saudi Investment Forum, which took place in September 2021 in Nur-Sultan, also brought positive results.