NUR-SULTAN –- More than six million people turned out on Sunday, June 5 by 2 p.m. of local time to vote in for the national referendum on constitutional amendments, which is 53.43 percent of the eligible population, which deemed the referendum valid, reported the Central Referendum Commission (CRC). 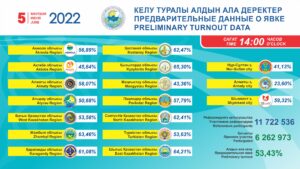 “Referendum is considered valid if more than half of the citizens entitled to vote take part in the voting. The turnout threshold has been reached,” pronounces CRC member Anastasiya Shegortsova.

“According to the law, a referendum is considered valid if more than half of the citizens entitled to vote take part in the voting. According to the territorial referendum commissions, the turnout threshold has been reached,” said CRC member Anastasiya Shegortsova. 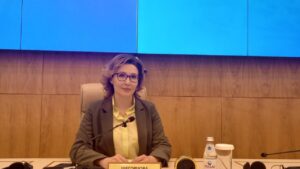 The highest voter turnout so far was recorded in the Kyzylorda Region (65.3 percent), while Almaty city, Kazakhstan’s largest city and former capital, showed the lowest turnouts at that time with 23.6 percent.

At the capital city Nur-Sultan 41.13 percent of voters came to the polling stations during the seven hours that the voting has been going on. High activity among Nur-Sultan residents has been observed as voters line up to exercise their civic right to vote at the referendum, according to the city akimat (administration) website.

The turnout at the national referendum is relatively at the same level compared to the last presidential elections in 2019. Three years ago, 51.8 percent of Kazakh citizens voted by 2 p.m.

Voting will continue until 8. p.m. local time, with the country’s western regions having one hour ’s time difference with the rest of the country.