NUR-SULTAN – President Kassym-Jomart Tokayev commended the development of the police system in Kazakhstan, an institution that is celebrating its 30th anniversary today. Attending the ceremony, Tokayev stated that there is a lot of work yet to be done to reform the police, reports the presidential press service. 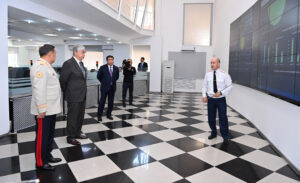 He visited the operational management center, where he got acquainted with the situation and analytical center and examined how new digital technologies are incorporated into the work of the police. “This is only the beginning, of course, but it is a good beginning,” he said.

Despite the problems in the police system, 30 years is an important milestone in the history of the country’s independence. Tokayev said the law enforcement system is a solid foundation and a guarantor of the stability of Kazakh statehood.

“Undoubtedly, enforcement of laws and preservation of public order is the work demanding the outstanding responsibility. In recent years large-scale and systematic reforms were carried out in the internal affairs having a positive impact on the overall activities of Kazakhstan’s police,” said Tokayev addressing the gathering and expressing gratitude to the veterans of the police.

Emphasizing that outstanding responsibilities come together with such traits as diligence, high dedication, and energy, Tokayev warned the police officers to always be vigilant as new risks and threats continue to emerge that threaten the safety of the state.

According to him, people’s trust in justice and the effectiveness of the state is directly associated with the professionalism and qualities of law enforcement officers. They represent the “idea of the state as a whole.”

“Citizens’ attitude towards state policy and reforms in the country directly depends on your words and actions. You must never forget this. Unfortunately, citizens’ trust in the law enforcement system is not at the highest level yet. Occasional cases of injustice, indifference on the part of the police, and sometimes their illegal actions cast a shadow over the activities of all structures of the Ministry of Internal Affairs,” said Tokayev.

In March, President Tokayev set forward the task to transform the police along a people-oriented model, what he described as a service model, where the main focus is on citizens and communities and the mission is to provide lawful, timely, comprehensive, and informed services to anyone who seeks help from police.

Tokayev also emphasized the need to foster a new behavioral culture among the citizens.

“The work of the police must be transparent and open, and they must be closer to the people. It is high time to get rid of bureaucracy. It is a disease that prevents us from working directly with people. It is necessary to listen to objective criticism from citizens. We should thoroughly and carefully study their comments and suggestions,” said Tokayev.

“In an extremely unstable and rapidly developing world, only those people who honor the laws and norms of morality are able to maintain the status of a strong and sovereign nation. Today, in our society there are sometimes different, polar assessments of our recent past, and there are also prejudiced opinions. However, we have no right to cross out the significant achievements of the independence period. It is important to remember that a nation that denies its history and leaders has no future,” said Tokayev.

Tokayev assured the police of the continued support from the state.

“We will always pay special attention to supporting the employees of law enforcement agencies. Over the past few years, the salaries of police officers have been increased several times, and compensation for expenses on their rent was introduced. (…) We will continue to take comprehensive measures to increase the legal and social protection of police officers,” said Tokayev, stressing the importance of encouraging young people to join the law enforcement agencies. But to do so, the state needs to make it attractive to work in the law enforcement system.