NUR-SULTAN – Kazakhstan’s Deputy Prime Minister – Minister of Foreign Affairs Mukhtar Tileuberdi participated in the first meeting of state parties to the Treaty on the Prohibition of Nuclear Weapons (TPNW) taking place June 21-23 in Vienna. He reaffirmed Kazakhstan’s commitment to a nuclear-weapons-free world and proposed several initiatives, where one of them is to establish an International Trust Fund to finance projects related to victim assistance and environmental restoration, reports the ministry’s press service. 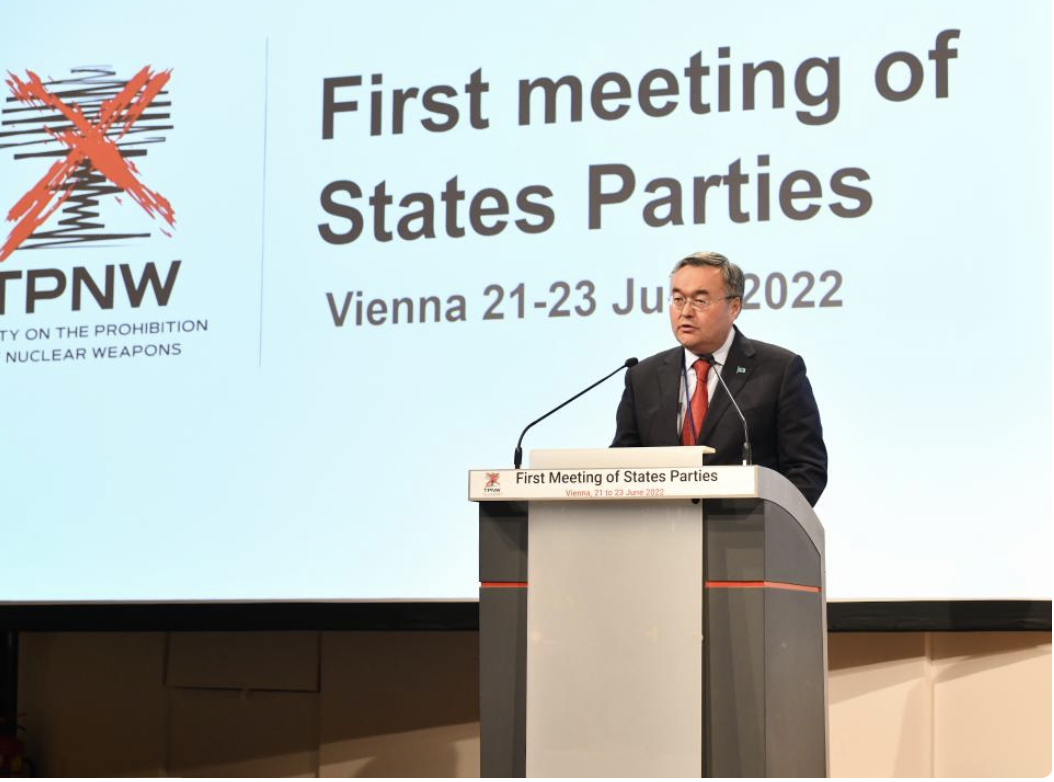 TPNW is the multilateral nuclear disarmament treaty that has been negotiated for more than two decades. It was adopted on July 7, 2017, at the United Nations and entered into force on Jan. 22, 2021. To date, 62 states have ratified or acceded to the TPNW and 86 have signed it.

The first meeting was supposed to take place in January, as envisioned by the treaty that says the meeting shall be held within one year of the entry into force of the treaty, but state parties had to postpone it to a later date due to the COVID-19 pandemic.

The TPNW contains a comprehensive set of prohibitions on participating in any nuclear weapon-related activities. This includes undertakings not to develop, test, produce, acquire, possess, stockpile, use or threaten to use nuclear weapons.

At their first meeting, state parties discussed the treaty’s status and implementation. Addressing the gathering, Tileuberdi reiterated Kazakhstan’s important role in global nuclear non-proliferation. The nation voluntarily dismantled what was once the world’s fourth-largest nuclear arsenal that it had inherited from the Soviet Union. But the consequences of more than 450 nuclear tests conducted on the territory of Kazakhstan by the Soviet Union are still born by people and the environment.

Tileuberdi explained that Kazakhstan’s decision to join the TPNW was motivated not only by political reasons but also by the country’s firm commitment to achieving a world free of nuclear weapons.

“Kazakhstan is rightfully at the forefront of the global movement for the elimination of nuclear weapons, and this is a top priority for us,” said the minister, noting Kazakhstan’s active participation in the process of negotiating the text of the treaty and preparing for the first meeting.

At Kazakhstan’s initiative, a working group was created that prepared proposals to assist the victims of nuclear weapons testing and use and to restore the environment, including the establishment of the trust fund.

Karipbek Kuyukov, an anti-nuclear activist from Kazakhstan and an eminent artist, was given the floor on behalf of all victims of nuclear weapons testing and use. His life story is a vivid testimony to the detrimental consequences of nuclear testing. A native of the village Egindibulak, some 100 kilometers from the Semipalatinsk nuclear test site, Kuyukov was born without arms because of his mother’s exposure to nuclear radiation.

The artist called on all participants to accelerate efforts toward a world free of nuclear weapons, which were discussed later at a thematic session organized by Kazakhstan, Kiribati, and disarmament non-governmental organizations like Nuclear Age Peace Foundation and Soka Gakkai (Value-Creation Society in Japanese).

The session was attended by representatives of the United Nations Office for Disarmament Affairs (UNODA), the Kazakh victims of nuclear tests – Karipbek Kuyukov and Dmitry Veselov, representatives of the National Nuclear Center of Kazakhstan, youth organizations of the Pacific region, and well-known experts in nuclear disarmament.

Considering Kazakhstan’s contribution to nuclear disarmament, the country has nominated its candidacy for the position of president of the third meeting of the TPNW for 2024-2026. The work of the first meeting will continue until June 23.