NUR-SULTAN – It is vital to objectively investigate the circumstances and those responsible for the attacks and mass riots in January, said President Kassym-Jomart Tokayev during the meeting with Prosecutor General Berik Asylov on June 2, reported Akorda. 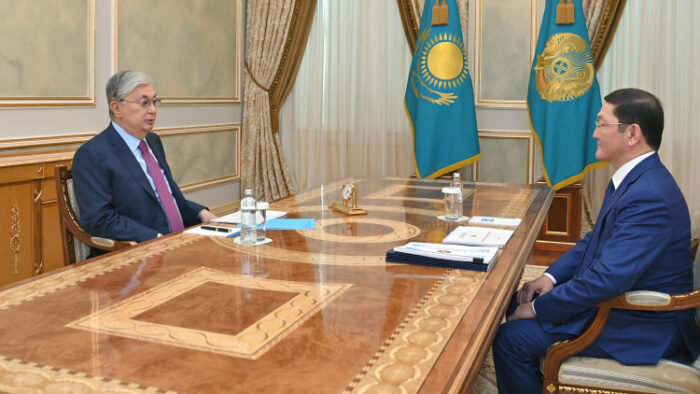 The results of the investigation should be presented to the public on a regular basis.

Asylov said that 489 cases have been filed to courts as part of the investigation into the January events. Some 331 people were convicted, mostly for theft, possession and theft of firearms and 23 individuals have received prison sentences.

The cases of illegal methods of investigation and death of people during the riots are under special control.

Earlier, Deputy Head of the first Service of the General Prosecutor’s Office Yeldos Kilymzhanov reported that 514 suspects are being held in custody at the briefing at the Central Communications Center.

The commission has been working on 5,065 pre-trial investigations nationwide. Some 205 suspects are being held in custody in Almaty and 1,066 criminal cases including five cases of mass riots and five cases related to terrorism are under investigation.

“The Prosecutor General’s Office continues to investigate all the causes and details of the January events under the instructions of President Kassym-Jomart Tokayev. Cases related to riots and acts of terrorism are complex in terms of investigation and evidence search. More than 20,000 investigative activities have been carried out on cases of special prosecutors in eight regions and 3,500 forensic examinations will be conducted,” said Kilymzhanov.

It is necessary to identify the role of each participant in crimes, provide an objective assessment of his or her actions and make a legal procedural decision.

The Prosecutor General’s Office confirmed that the seizure of the Almaty Presidential Residence was identified as one of the stages of the overthrow of power. Separate groups of up to 1,000 people seized the buildings of the city administration, the President’s Residence to sow panic and fear among the population.

According to head of the investigative department of the Ministry of Internal Affairs Sanjar Adilov, approximately 1,500 buildings have been attacked and 240 cars have been damaged in Almaty. Attackers seized special equipment and heavy vehicles to destroy administrative buildings, banks and retail outlets to commit robberies.

The priority tasks of the internal affairs bodies are to investigate all the circumstances of the crimes committed, as well as to ensure damage compensation.