By Zhanna Shayakhmetova in International on 16 June 2022

NUR-SULTAN – The European Union welcomes the political reforms initiated by Kazakh President Kassym-Jomart Tokayev in his state-to-the-nation address in mid-March, and confirmed by the referendum in June, in addition to the socio-economic reforms started after the tragic January events. The EU stands ready to support further modernization and democratization of the country, EU Ambassador to Kazakhstan Kestutis Jankauskas told The Astana Times in a recent interview. 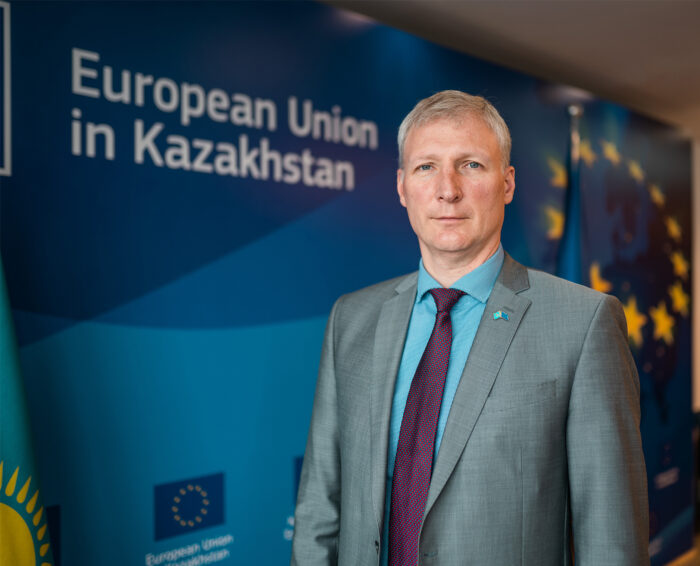 “Since then, the EU and its member states have been providing political and technical support to Kazakhstan’s reforms – a complicated process that evolved over the years. Since March 2020, the EU-Kazakhstan relations have a new solid base – the Enhanced Partnership and Cooperation Agreement (EPCA). Kazakhstan is the first country in Central Asia to have such an agreement with the EU. Our relations are also based on the 2019 EU Strategy on Central Asia,” said the Ambassador.

The EU is Kazakhstan’s main trading partner with 40 percent of its external trade, and it is also the largest foreign investor in the country.

“The EU sees Kazakhstan as an important partner and the EU has consistently supported Kazakhstan through projects that are directed at sharing and implementing the EU’s best practices and standards. This is especially important today – and it should be noted that it refers not only to economic matters, but also to the principles of democracy and the rule of law.”

The Ambassador noted the EU’s sanctions against Russia following “its unprovoked and illegal military invasion of Ukraine” are not targeting Kazakhstan.

“We respect Kazakhstan’s neutral stance, and we expect its territory will not be used for any activities to bypass the sanctions. We note with satisfaction the statements of President Tokayev and Foreign Minister Tileuberdi on non-recognition of the two separatist entities, and clear non-participation of Kazakhstan in any hostile activities against sovereign Ukraine. This is important, as this unjustified military aggression against an independent country grossly violates the UN Charter and rules-based international order. Even though the Russian government is calling it a “special military operation,” a vast majority of the international community, as clearly indicated by several votes in the United Nations fora, disagrees,” he added.

While Kazakhstan abstained in those votes, the country’s President Kassym-Jomart Tokayev has spoken to the presidents of both Russia and Ukraine, Vladimir Putin and Volodymyr Zelenskyy, offering Kazakhstan’s mediation efforts, if they were desired.

This year marks a two-year anniversary of the entrance into force of the EPCA, which is the major document defining the EU-Kazakhstan relations. The agreement with Kazakhstan has been provisionally implemented since May 2016 (it is fully in force since 2020), and has provided a boost to economic and political ties between the EU and Kazakhstan for nearly six years.

In 1999, EU-Kazakhstan’s total trade in goods amounted to $2.2 billion, while in a year as difficult as 2020 it reached 18.6 billion euros (US$19.4 billion), according to official EU statistics. The agreement has reinforced the EU’s position as the number one investment partner for Kazakhstan.

“The EU would like the EPCA to significantly upgrade our bilateral relations in many areas, including regional cooperation and connectivity in Central Asia (also taking into account the situation in Afghanistan),” said the Ambassador. “There is much potential for developing more EU involvement in Kazakhstan and the region. It is now high time to focus on its practical implementation and new opportunities it can bring to citizens and economic actors. It is necessary to translate those ambitious economic and political commitments into something concrete that people of the region can see and feel. There should be more opportunities for Kazakhs to travel to Europe, and for Europeans to visit beautiful Kazakhstan. This as well as building alternative connectivity routes for trade is also our top priority in responding to the economic impact of the current geopolitical challenges.”

Jankauskas also spoke about the January events that resulted in tragic consequences for the Kazakh people.

“The EU closely followed the situation in the country and condemned the widespread acts of violence. We deeply regret the loss of life of innocent people. We also welcome that, following the events, President Tokayev has initiated an extensive package of socio-economic and political reforms, which are focused on further democratization, liberalization and decentralization of the state. The most important thing is to ensure successful implementation of this ambitious political program. The EU is ready to further cooperate with Kazakhstan. It is, however, vital to conclude the investigation of the January events as soon as possible in a transparent way in line with international standards. The investigation into the cases of torture has to be completed without delay to make sure that it never happens again,” he said.

The issues of human rights, rule of law and further democratization were also in the focus of the recent fruitful visit of the European Parliament members to Kazakhstan on April 11-13. The EP delegation met with Kazakh high-level officials to discuss the ongoing investigations of the January events, the new package of political reform and of course the situation in Ukraine. This was a good opportunity for both sides to exchange views and advance further our dialogue.

In summer of 2019, the EU-Kazakhstan Business Platform, chaired by the Prime Minister, was launched for a direct dialogue between the Kazakh authorities, business representatives and the EU and its member states’ ambassadors.

Jankauskas said Kazakhstan’s ambition to become carbon-neutral by 2060 through diversification and decarbonization aligns well with the EU Green Deal, a new growth strategy to boost the efficient use of resources by moving to a clean, circular economy in order to stop climate change and reverse biodiversity loss to preserve planet for future generations. Ambitious short-term targets are important to start the journey towards that goal without any delay.

“We want to turn climate and environment challenges into opportunities across all economic sectors and make the transition just and inclusive for all. The world is facing an unprecedented climate crisis and to solve it we need everyone on board. In December 2020, the EU enhanced its target under the Paris Agreement to at least a 55 percent reduction in greenhouse gas emissions by 2030 compared to 1990. Our goal is to become climate neutral by 2050. The EU is committed to lead by example, spearhead the global transition to a circular economy, halt biodiversity loss, protect human health and advance climate action on the global agenda,” he said.

The Ambassador believes it will take a lot of time and large-scale investments to transform economies, societies and lifestyles to decouple economic growth from environmental degradation. But all nations need to stop investing in obsolete technologies of the last century now, and channel funds to green high-tech infrastructure projects to build back better after the pandemic.

The EU supports activities leading to the decarbonization of Kazakhstan and other partner countries in Central Asia through its ongoing projects such as WECOOP, CAWEP, SWITCH-Asia, Central Asia Water-Energy-Food (WEF) Nexus Dialogue and HYDRO4U. A new project on Sustainable Energy Connectivity in Central Asia (SECCA) has recently been launched to promote a more sustainable energy mix in the Central Asia region in line with EU best practices.

The introduction of Best Available Techniques (BAT), which is one of the priority measures laid down in the new Environmental Code of Kazakhstan, will reduce air and water pollution, decrease waste generation and cut GHG emissions through increased energy efficiency.

“Through the WECOOP project, we are supporting EU-Central Asia policy dialogue and providing technical assistance in this field to Kazakhstan’s International Green Technologies and Investment Center to promote green investments in relevant sectors with the aim of contributing to measurable reductions in man-made pollution, including CO2 emissions,” he said.

In the framework of the CAWEP program, the Kazakh government has received a grant of $1.5 million to support the preparation of the North Aral Sea Development and Revitalisation Project feasibility study. This initiative contributes to the efforts of strengthening water security and climate, supporting investments and interventions that will enhance water use efficiency and climate resilience in Kazakhstan part of the Aral Sea basin and restore a critical ecosystem around the North Aral Sea.

The EU also supports Kazakhstan in its transition to a green economy with technical assistance through EBRD with a grant of 3 million euros (US$3.1 million) from the EU Investment Facility for Central Asia (IFCA). Since 2018 close to 20 million euros (US$20.8 million) in grants have been provided from IFCA to the EBRD implemented SME Finance Facility for Central Asia supporting businesses across the region, including Kazakhstan. The current priority focus of IFCA is on energy, environment, small and medium size enterprises and social infrastructure.

“Kazakhstan’s ambition to be a trend-setter in the region when it comes to transition towards a green economy is also well aligned with the EU’s regional priority to cooperate with our partner countries to enhance environmental, climate and water resilience in Central Asia, which is one of the world’s most vulnerable regions in terms of climate change,” said Jankauskas.

The EU Delegation in Nur-Sultan is currently managing human rights related ongoing projects under the European Instrument for Democracy and Human Rights (EIDHR) for a total amount of 2 million euros (US$2.08 million). The projects support women and human rights defenders for a more sustainable human rights defenders’ community in Central Asia. They promote the elimination of torture and ill-treatment; help develop democratic foundations of modern community policing with respect to human rights; increase media and legal literacy and improve the quality of life in rural districts of Western Kazakhstan through public service delivery which effectively meets local needs.

In the beginning of the year, four new projects were launched to promote a meaningful and structured participation of Civil Society Organizations (CSOs) in local decision-making and strengthen their collaboration with local authorities. The projects received grants totalling EUR 1 million following the 2021 Call for Proposals under the CSO Program.

“The dialogue with Civil Society Organizations (CSO) in Kazakhstan takes place on a broad range of topics and in various formats along the priorities for EU engagement as envisaged in the EU Country Roadmap for Engagement with Civil Society, which is currently being updated and will reflect the post-January situation,” said the Ambassador.