Astana Process Participants Speak About Territorial Integrity, Humanitarian Assistance for Syria at 18th Round of Talks in Kazakhstan

By Zhanna Shayakhmetova in International on 16 June 2022

NUR-SULTAN – The representatives of Iran, Russia and Turkey who serve as guarantors of the Astana Process on Syria expressed their commitment to the sovereignty, independence, unity and territorial integrity of Syria and the purposes and principles of the UN Charter at the 18th International Meeting on Syria in the Kazakh capital on July 16. 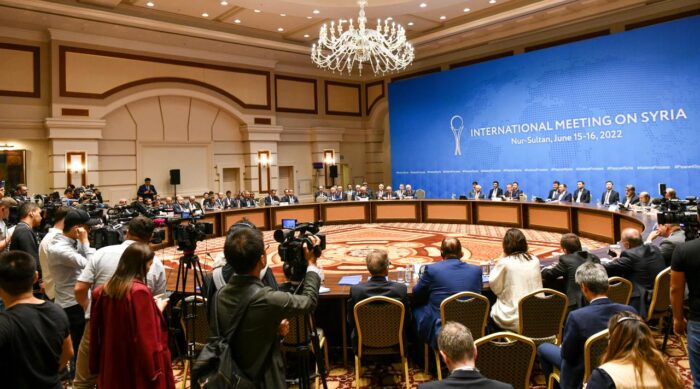 The joint statement featuring 19 resolutions has been delivered by Kazakh Deputy Minister of Foreign Affairs Adil Tursunov. The delegations noted the leading role of the Astana Process in the peaceful settlement of the Syrian crisis.

The sides agreed to continue working together “to combat terrorism in all forms and manifestations and stand against separatist agendas aimed at undermining the sovereignty and territorial integrity of Syria as well as threatening the national security of neighboring countries including through cross-border attacks and infiltrations.”

It was agreed to increase humanitarian assistance to people throughout the country without discrimination, politicization and preconditions.

The sides also condemned the Israeli military attacks in Syria, which “violate the international law, international humanitarian law, the sovereignty of Syria and neighboring countries, endanger the stability and security in the region and called for cessation of them.”

The Drafting Commission of the Syrian Constitutional Committee was held between May 30 and June 3 in Geneva. The next round will be held on July 25-29.

Deputy Minister of Foreign Affairs of Syria Mohammed Ayman Soussan expressed concern over the Israeli attacks in Syria saying that “this is a serious threat to peace and stability in the region that undermines all the previous arrangements.”

The head of the Syrian delegation also expressed gratitude to the representatives of Iran and Russia for their constant support in the fight against terrorism and their commitment to strengthening the stability of Syria.

Russian Special Presidential Envoy for Syria Alexander Lavrentiev noted the positive results of the talks in Nur-Sultan. The Astana Process is an effective platform to discuss the situation in Syria and consider various approaches to solutions.

“We discussed a wide range of issues related to the political settlement, work on the constitutional committee, the situation in the country and the exchange of prisoners, issues with the refugees. We had extensive negotiations on all the points in the statement,” he said.

The constitutional process in Syria must be accelerated, noted Lavrentiev but the level of trust between the parties to the Constitutional Committee for Syria is still insufficient.

The delegations of Jordan, Iraq and Lebanon served as observers of the Astana format as well as representatives of the United Nations and the ICRC at the meeting.

It is expected that the 19th International Meeting on Syria in Nur-Sultan will be convened in the second half of 2022.