By Staff Report in International on 30 April 2022

NUR-SULTAN – The economic dimension plays an important role in Kazakh-Japanese cooperation, President Kassym-Jomart Tokayev said during the meeting with Minister of Foreign Affairs of Japan Yoshimasa Hayashi, who paid an official visit to Kazakhstan on April 29, reported Akorda. 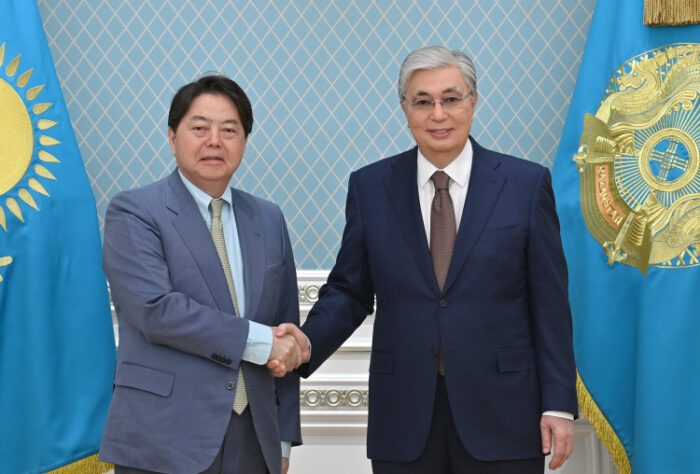 The President said that the 30th anniversary of the establishment of diplomatic relations between Kazakhstan and Japan is a historic milestone. The countries have developed constructive cooperation and expanded their strategic partnership during that time.

The agenda of the meeting included the prospects of the Kazakh-Japanese strategic partnership in trade, economic, investment, cultural and humanitarian spheres and interaction within international structures.

Kazakhstan is interested in enhancing multifaceted economic ties with Japan. The countries enjoy successful cooperation within the UN. Trade and investment as well as cultural and humanitarian areas are also promising areas for cooperation.

Japan is ready to expand its mutually beneficial partnership with Kazakhstan in trade, economic and investment areas, said Minister Hayashi. The representation of Japanese companies in Kazakhstan is the highest among the countries of Central Asia.

The foreign minister welcomed Kazakhstan’s reforms and efforts to provide humanitarian support to the Afghan people.

Following the meetings the Action plan for 2022-2023 years between two foreign ministries was signed.