NUR-SULTAN – President’s spokesperson Berik Uali spoke about the timeline of President Kassym-Jomart Tokayev’s decisions after the protests hit the country in an interview with the Khabar 24 news agency on Jan. 9.

President Tokayev wrote all his statements to the citizens himself, without the support of consultants, said Uali. Photo credit: screenshot from the Khabar 24 interview.

In his first address aired on the night of Jan. 5, President Tokayev urged the people not to “give in to provocations from inside and outside.”

“Calls to attack the offices of civilian and military departments are absolutely illegal. This is a crime that will be punished. The government will not fall and what we need is not conflict, but mutual trust,” he said then.

Uali said that the President wrote all his statements himself.  “At this very moment, before the address, the press service employees set up cameras, adjusted the sound, and immediately recorded the head of the state’s statement, which was immediately broadcast to the national TV channels,” said Uali. 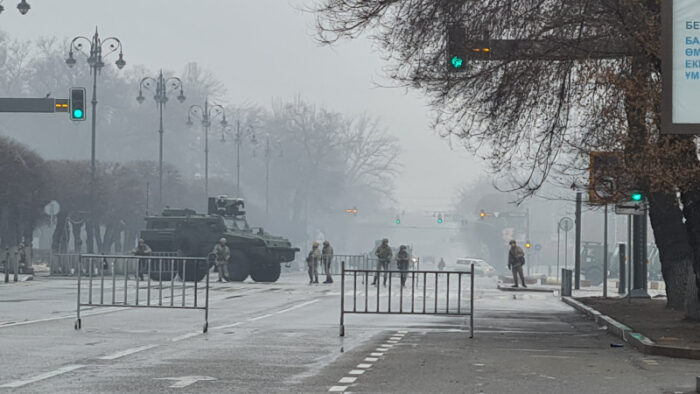 The tragic events that killed 17 law enforcement and security officers and injured many more will remain a black spot in the history of independent Kazakhstan, according to Uali. He said that Tokayev kept his promise of being with the people through critical moments and bearing the enormous responsibility of making urgent decisions.

“Kassym-Jomart Tokayev immediately took full control of the situation. On Jan. 5, at approximately 2 a.m., he signed a decree on the introduction of the state of emergency in the Mangistau Region and in Almaty. We published information about this immediately on the Akorda website,” said Uali, noting that the entire presidential office was working non-stop.

Amid the destabilization of the situation in the country, the President decided to introduce a state of emergency in the city of Nur-Sultan and the Almaty Region that later was extended nationwide and would last through Jan. 19.

Tokayev repeatedly said that it was his “constitutional duty” to be with the people.

“In the evening (of Jan. 5), the President continued phone conversations with all the heads of CSTO (Collective Security Treaty Organization) states. At 11:30 p.m. that same day, he chaired the first session of the Security Council, where he announced the beginning of an anti-terrorist operation in Almaty and decided to ask the heads of CSTO countries to support our country,” said Uali.

The CSTO peacekeeping troops help to maintain public order and security and their mission is limited in scope and scale. President Tokayev will focus on the situation in Kazakhstan during the upcoming CSTO virtual meeting today.

“I want to tell you, dear compatriots, that I am proud of you. I would like to express my gratitude to those citizens of Kazakhstan who have remained calm in recent days and made efforts to ensure stability and public order,” said Tokayev in his latest address to the people.

At the moment, the situation is steadily stabilizing in Kazakhstan, according to the country’s National Security Committee.

“As of Jan. 10, the situation is under control. National and regional operational headquarters responsible for fighting terrorists have eliminated the hotbeds of the terrorist threat,” said the committee in a statement. All seized administrative facilities in Almaty, Kyzylorda, Taldykorgan, and Taraz have been recaptured.

At least 7,939 people were detained, according to the Kazakh Ministry of Internal Affairs.