NUR-SULTAN – President Kassym-Jomart Tokayev addressed the emergency session of the Collective Security Treaty Organization (CSTO) Collective Security Council on Jan. 10, which was devoted to the situation in Kazakhstan and measures to normalize it, reports the Akorda press service. 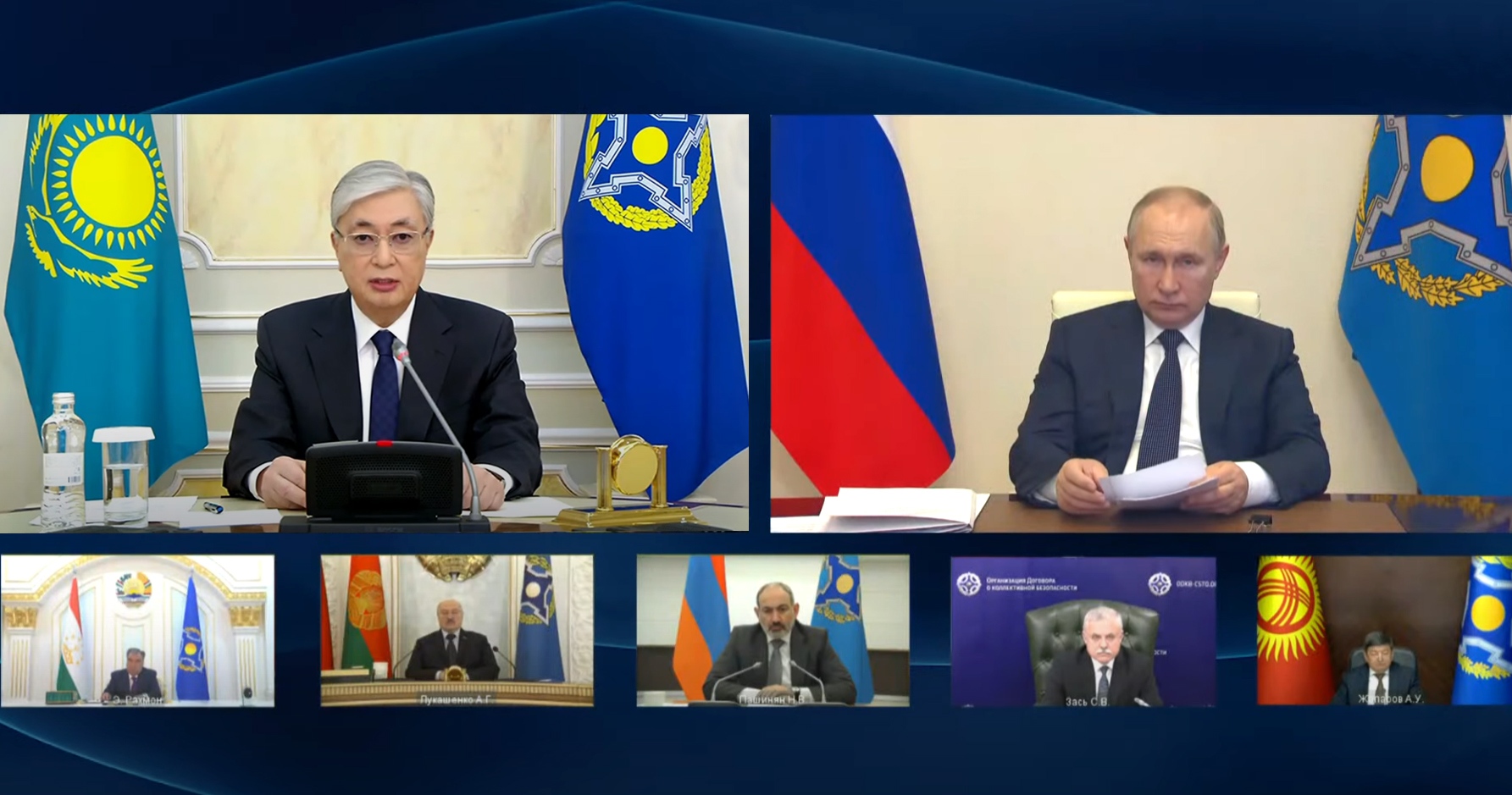 Along with President Tokayev, the videoconference was attended by the Prime Minister of Armenia Nikol Pashinyan, President of Belarus Alexander Lukashenko, President of Russia Vladimir Putin, President of Tajikistan Emomali Rakhmon, Chair of the Cabinet of Ministers, and Head of the Presidential Administration of Kyrgyzstan Akylbek Zhaparov, and the CSTO Secretary-General Stanislav Zas.

According to Tokayev, in just a few days, Kazakhstan witnessed a “massive crisis,” the worst in over 30 years of independence.

He said the country weathered an attempted coup d’etat coordinated by what he called a “single center.”

The peaceful protests began last week in western Kazakhstan after nearly a double spike in price for liquid petroleum gas, widely used in the region.

According to Tokayev, this was used by some groups to undermine the constitutional order.

“Under the pretext of spontaneous protests, a wave of unrest broke out. Religious radicals, criminals, bandits, looters, and petty hooligans appeared as if on cue. Socio-economic and socio-political demands were put into the background and were forgotten. (…) The main goal became obvious: to undermine the constitutional order, to destroy the institutions of governance, and to seize power,” Tokayev told the meeting.

While the situation was unstable in almost all regions, the main blow was directed against Almaty, the country’s biggest city and large business, financial and cultural center.

“This is our largest city and the financial center of the country that serves the most important transport and communication hubs. Losing this city would have paved the way to a takeover of the entire densely populated south and then the entire country,” said Tokayev noting that the terrorists planned to attack the capital of the country.

He thanked the CSTO partners for their assistance. At the moment, the CSTO mission that will end soon has 2,030 troops and 250 pieces of military hardware.

“In fact, this is the first case when the peacekeeping forces of the CSTO have been really involved to ensure the security, stability, and integrity of one of its members. Not only military but also, above all, moral support from CSTO partners is fundamentally important for us. All member states of the organization have spoken in one voice and resolutely supported Kazakhstan’s appeal,” said Tokayev.

He said that the organization, which “proved its relevance and effectiveness as a military and political organization,” will gain valuable experience from this.

“It is a real working mechanism for ensuring stability and security of our states,” he added.

While questions arise over the legitimacy of the CSTO peacekeeping troops in Kazakhstan, Tokayev said this is due to a “lack of reliable information and misunderstanding of the entire situation.”

He also noted that there was a completely wrong interpretation of both the use of CSTO forces and the reading of the situation in Kazakhstan in foreign media.

“Despite all the facts provided, some sources claim that the authorities in Kazakhstan are fighting peaceful protesters. This is absolute misinformation. We have never used and will never use armed force against peaceful demonstrators,” said Tokayev.

Kazakhstan is currently in a state of emergency that will last through Jan. 19. The curfew is in place between 7 a.m. and 11 p.m., and as a ban on mass gatherings.