On January 11, President of Kazakhstan, Kassym-Jomart Tokayev, delivered an address at a special session of the Majilis (the lower chamber of Kazakhstan’s Parliament). The President’s address followed an unprecedented outbreak of violence which has taken place across Kazakhstan since last week. 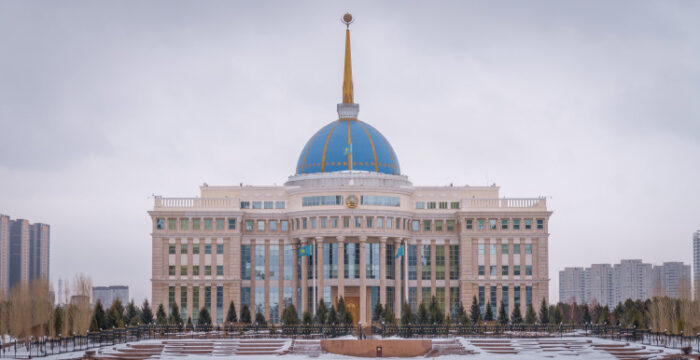 Akorda, the residence of the President of Kazakhstan.

President Tokayev reconfirmed that the perpetrators of violence took advantage of the genuine discontent of the population with the increase in price for liquefied gas. Initially, peaceful rallies against the rise of the gas price took place in a number of regions. Then, the protests were hijacked by bandits, looters, and armed terrorists, including foreign militants. The perpetrators’ key goal is obvious – they aimed at disorganization of government institutions, undermining of the constitutional order, and, ultimately, the seizure of power in Kazakhstan.

Facing an unprecedented armed aggression by terrorists, Kazakhstan had to call for assistance from its partners from the Collective Security Treaty Organization (CSTO) and requested the deployment of an international peacekeeping contingent. By today, the core mission of the CSTO peacekeeping force has been successfully completed. A phased withdrawal from Kazakhstan of the entire CSTO peacekeeping contingent will begin in two days and will take no more than 10 days altogether.

The President said that it is very important to recognise that, at the time of inviting the CSTO contingent to Kazakhstan, the country was in danger of ceding control over its biggest city, Almaty, to terrorists. If we had lost Almaty, we could have then lost the entire country. The risk was particularly high given that Kazakhstan’s National Security Committee, a key counter-terrorism agency, failed to identify timely a critical threat to the national security.

During the session, President Tokayev nominated Alikhan Smailov, former finance minister and deputy prime minister, as the new Prime Minister of Kazakhstan. The lower house voted Smailov in for the new office. The new Prime Minister has been given three weeks to prepare and present the government’s action plan for 2022.

President Tokayev has put forward a number of initiatives designed to address the current crisis and support long-term well-being of the people of Kazakhstan.

–  Almaty and other regions that suffered damage will be restored and rebuilt as soon as possible. Normal operation of the financial system, transport sector, food supply chains will be restored shortly. The President stressed that it is his personal obligation and the responsibility of the government.

–  The overall situation in Kazakhstan is currently stable. But it is crucial to successfully complete the ongoing counter-terrorist operation, fully restore law and order in the country.

–  A special investigation task force has been instructed to bring to justice all the militants and their accomplices involved in crimes against civilians, reveal all causes and details of the tragedy.

–  Help will be provided to the families of the deceased law enforcement officers, military personnel, and civilians. The government will provide housing and education allowances to those families, as well as other forms of support.

–  The government will provide financial assistance and other types of support to businesses at the time of crisis. For businesses, interest payment on loans, payment of administrative fines and penalties has been temporarily suspended.

–  The government will take every possible measure to restore the confidence of domestic and foreign investors and trade partners in Kazakh economy. All Kazakhstan’s obligations and guarantees to investors will be strictly followed and fulfilled. A new Concept of Investment Policy will be developed to increase Kazakhstan’s investment attractiveness with due account of the increasing role of ESG requirements, global green energy transition and technological transition.

–  The government will make a special effort to address the issues of economic inequality in Kazakhstan. It will ensure that incomes of all groups of population grow at pace with the growth of the national economy.

–  Within two months, the government and the Atameken National Chamber of Entrepreneurs will develop a program to increase the income of the general public and will prepare concrete proposals to reduce poverty in Kazakhstan.

–  The government will swiftly develop a new Social Code. The government must adapt its social policies to the new reality, taking into account the challenges of the Covid pandemic and all other problems. The Social Code should become a key element of the new “social contract” in Kazakhstan.

–  A systematic effort will be made to reduce inflation and ensure stability of the national currency. The target inflation corridor is 3-4 percent by 2025. The government, together with the National Bank and the Chamber of Entrepreneurs, will develop a set of measures to keep inflation at bay. It should include measures to reduce import dependence, reduce excessive interventions and use of monetary policy instruments.

–  A special fund “For the People of Kazakhstan” will be established to support Kazakh citizens at the time of need. The fund will be fully transparent and accountable to the public. Its funding will come from private and public sources.

Pressing ahead with the reform agenda

–  The creation of a new economic platform is key. The goal of the government’s economic policy is to develop a full-fledged market economy with a proper social orientation. Diversification of the economy through the development of the manufacturing industry and the support of a fair economic competition are the foundations of this policy.

–  The government will announce measures to rid the civil service of corruption, formalism, and red tape. The President announced that he will issue a separate decree on the “de-bureaucratization” of the government apparatus.

–  The program of continued political and economic transformation will proceed further. The government will work with the expert community and civil society to prepare a package of proposals, which will be considered at a meeting of Kazakhstan’s National Council of Public Trust.

–  President Tokayev announced a five-year moratorium on the increase in salaries of top government officials and regional mayors. At the same time, the salaries of lower level public sector employees will continue to grow.

–  The disproportion in the economic development of various regions of Kazakhstan will be addressed by the government. The government has been instructed to prepare a set of measures to level up the regions that are “lagging behind” economically.

–  The government will allocate educational grants for young people who live in densely populated provinces of Kazakhstan. The President instructed the government to open overseas branches of at least five major foreign universities by 2025 and develop a program to attract the best teachers to provinces.

–  The Samruk-Kazyna Sovereign Wealth Fund as well as the Development Bank of Kazakhstan will be subjected to detailed review and audit to ensure that their policies benefit the people of Kazakhstan.

–  Full review and audit will also be conducted to combat corruption, ensure transparency and efficiency of customs and border control procedures at some of the key facilities on Kazakhstan’s border.