NUR-SULTAN – Kazakhstan seeks to strengthen Kazakh-German relations, economic and investment cooperation and to implement joint projects. This was announced by First Deputy Prime Minister Roman Sklyar at the online meeting with the executives of German companies on Jan. 26, reported the Prime Minister’s Office. 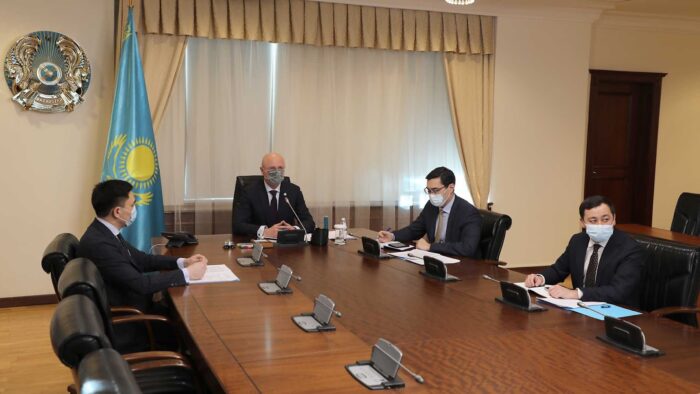 Approximately 90 representatives of German companies and heads of the branches in Kazakhstan including CLAAS, Svevind Group, Volkswagen, Siemens, Deutsche Bank, Knauf, Deutsche Bahn AG and other companies took part in the meeting.

Sklyar spoke about the recent initiatives launched by the government to ensure sustainable economic growth, welfare and protect the rights of investors on behalf of President Kassym-Jomart Tokayev.

Cooperation with foreign partners remains a key priority for the government. All obligations and guarantees to investors and businesses will be observed and implemented.

The government has been developing a new concept of investment policy to increase investment attractiveness by strengthening environmental, social, and governance (ESG) requirements, global energy and technological transition.

Chairman of the German Eastern Business Association Oliver Hermes noted that Kazakhstan is the main partner of Germany in the region and that Kazakhstan has huge potential for sustainable energy production.

Hermes said that German business leaders support Kazakhstan’s initiatives and will contribute to the development of the country.

The German business delegation is expected to visit Kazakhstan in May.

It is also reported that Deputy Minister of Foreign Affairs Almas Aidarov met with Managing Director of ExxonMobil Dinesh Sivasambu to discuss the prospects of the company’s investment activities in Kazakhstan on Jan. 27, according to the ministry’s press service.

Sivasambu said that recent events have not affected the company’s current and future investment plans in Kazakhstan. He expressed support for Kazakhstan’s initiatives to improve the investment climate.