By Aibarshyn Akhmetkali in Kazakhstan’s Independence: 30 Years, Nation on 10 December 2021

NUR-SULTAN – During the 30 years of its independence, Kazakhstan was able to improve its economic and social indicators and transform from a peripheral Soviet republic to a modern state with a strong economy. Policies in business and trade, industrialization, and representation of Kazakhstan in world politics that led to such transformation were the main topics of discussion at the International Scientific Conference “Leadership. Stability. Progress,” which took place on Dec.10 in Nur-Sultan. 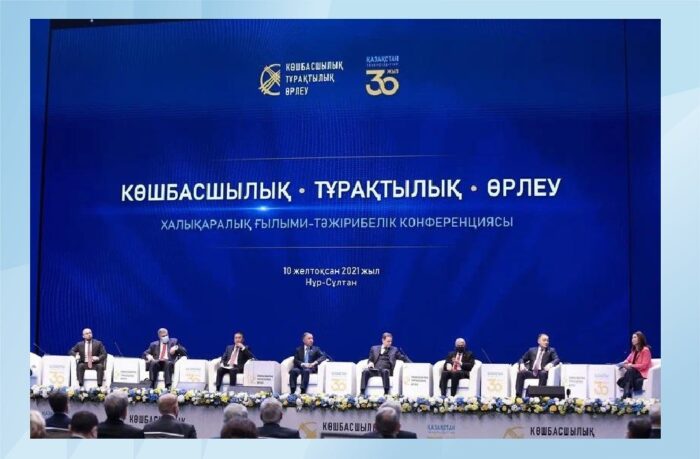 Nurlan Nigmatulin, Chairman of the Majilis of Parliament of Kazakhstan, opened the conference by highlighting the important role of Kazakhstan’s First President, Nursultan Nazarbayev’s leadership and wise political decisions that enabled stable economic growth after the collapse of the Soviet Union. Nigmatulin recalled the economic situation in the early 90s. “We found ourselves in a situation of economic crisis: industrial enterprises were shutting down, all economic ties were severed, wages, pensions and benefits were delayed for months, the country experienced rising inflation and a massive shortage of essential goods,” he said.

During the first years of independence 130 large enterprises shut down in Kazakhstan, the number of unemployed people reached two million, there was a 50 percent monthly inflation, and annual inflation exceeded 2,000 percent.

“It was under such difficult conditions that First President of Kazakhstan Nazarbayev formulated the basic formula for the country’s future success: economy first, then politics,” said Nigmatulin.

Among the most prominent decisions of Nazarbayev, Nigmatulin mentioned the decision to give up the nuclear missile arsenal, which ranked as the fourth most powerful in the world at that time. According to Nigmatulin, that decision contributed significantly to the country’s positive image in the international community.

Nazarbayev was also the initiator of ideas such as creating the Shanghai Cooperation Organization, the Eurasian Economic Union, hosting Congresses of Leaders of World and Traditional Religions, and the creation of the Turkic Council, which today has been renamed as the Organization of Turkic States.

Yeraly Togzhanov, Deputy Prime Minister of Kazakhstan, said that since the early years of independence, conditions for business development have improved. To illustrate his point, he mentioned that “the number of small and medium-sized businesses increased from 500,000 in 2005 to 1.4 million in 2021. As a result, the GDP grew 17 times in dollar equivalent. Population income grew 10 times. Unemployment was reduced from 12.8 percent to 4.9 percent.”

There were improvements in major social indicators as well. Average life expectancy in the country has increased to 71 years. Since independence, five million citizens have improved their living conditions. More than 5,000 new social facilities were built. As a result, coverage of pre-school education for children reached 99 percent.

Togzhanov also spoke about the industrialization program initiated by Nazarbayev. As a result of the program, over the past 12 years 1,500 projects were implemented, and more than 500 new types of products have been launched. Kazakhstan now exports its products to more than 130 countries of the world.

Chairman of the Board and rector of the Kazakh National Women’s Pedagogical University Gulmira Kanai concluded the conference by mentioning the government’s role in establishing gender equality and the fair representation of women in politics.

“More and more women are taking up senior leadership positions in rural areas of Kazakhstan. The share of women in the Majilis (lower house of Parliament) constitutes 27.1 percent. The number of women who were elected to serve the local government has increased from 568 to 740 people. However, women were underrepresented in economic and social spheres. Therefore, President Kassym-Jomart Tokayev initiated 30 percent quotas for women and young people in the list of political parties. The policy has already proven its effectiveness as over 26 percent of mayors in rural districts are women,” said Kanai.

Ján Kubiš, former OSCE Secretary General, Special Envoy of the Secretary-General on Libya, expressed his admiration for Kazakhstan’s achievements in a relatively short period of time with the following words: “for a human being to reach 30 years means to reach a certain stage of maturity. For states it is often still an age of challenges and growth on the way to adulthood. But Kazakhstan today is a successful combination of maturity and adulthood with young energy and clear vision.”