By Staff Report in Business, Kazakhstan’s Independence: 30 Years on 17 November 2021 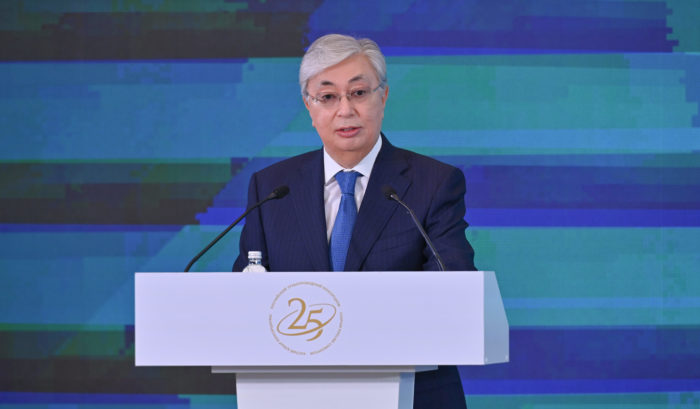 The CPC is the largest international oil transportation project in the region done with the participation of Kazakhstan, Russia and leading oil companies including Chevron, ENI, Lukoil, Shell and other companies. Its pipeline system mainly collects crude oil from large oil fields in the West Kazakhstan region and crude oil from Russian producers.

Tokayev noted that the oil and gas sector is one of the key industries in the economy of Kazakhstan. The country is one of the largest oil exporters worldwide. The Tengiz, Karachaganak and Kashagan fields account for 60 percent of the country’s total oil production.

“We currently produce up to 90 million tons of oil per year. The construction of the Caspian pipeline system had a significant impact on the development of the oil and gas sector,” he said.

The President recalled the long-term negotiations of Kazakh and Russian leaders to achieve a compromise between all its participants in the beginning of the project. First President Nursultan Nazarbayev proposed principles of partnership that contributed to the successful implementation of the consortium.

“This is a special project to me because I also took part in the beginning of its construction and launch,” said Tokayev.

Since 2001, Kazakhstan has exported more than 750 million tons of oil through the CPC pipeline. Its throughput capacity has grown almost 2.5-fold and reached up to 67 million tons per year. It is expected to increase its capacity to 80 million tons by 2023.

“The consortium has become a symbol of our long-term cooperation with foreign investors. Kazakhstan implemented the project in cooperation with Russia. The partnership between the two countries in the field of oil transportation has also been strengthened,” said Tokayev.

The President expressed gratitude to the staff, veterans and shareholders of the CPC and presented them with awards.

The importance of the CPC was also highlighted during the recent Interregional Forum, where President Tokayev and Russian President Vladimir Putin discussed cooperation in environmental issues and green growth.