NUR-SULTAN – Kazakhstan boasts the highest foreign direct investments stock value from the Eurasian Economic Union (EAEU) countries – $11.2 billion by 2020, an increase of $3 billion over the past four years, according to the latest Eurasian Development Bank (EDB) analytical report that monitors mutual direct investments by twelve states in the CIS and Georgia. The project is based on a bottom-up database of mutual direct investments, its main sources being company reports and other primary information.

Attracting FDI has been a priority for the Kazakh government.

By the end of 2020, the mutual investment stock of the EAEU countries reached $25.4 billion, up 24 percent over the last four years.

According to the report, metal ore mining, oil, and natural gas production, financial services are the key sectors receiving FDI from EAEU partners.

The geography of Kazakhstan’s FDI in the post-Soviet space is quite diversified, according to experts, and Kazakhstan accounts for 39 percent of all mutual post-Soviet FDI accumulated in Kyrgyzstan, largely due to the country’s operation of Bozymchak copper and gold mine, and almost 59 percent of FDI in Russia, including in metal ore production and non-ferrous metallurgy. 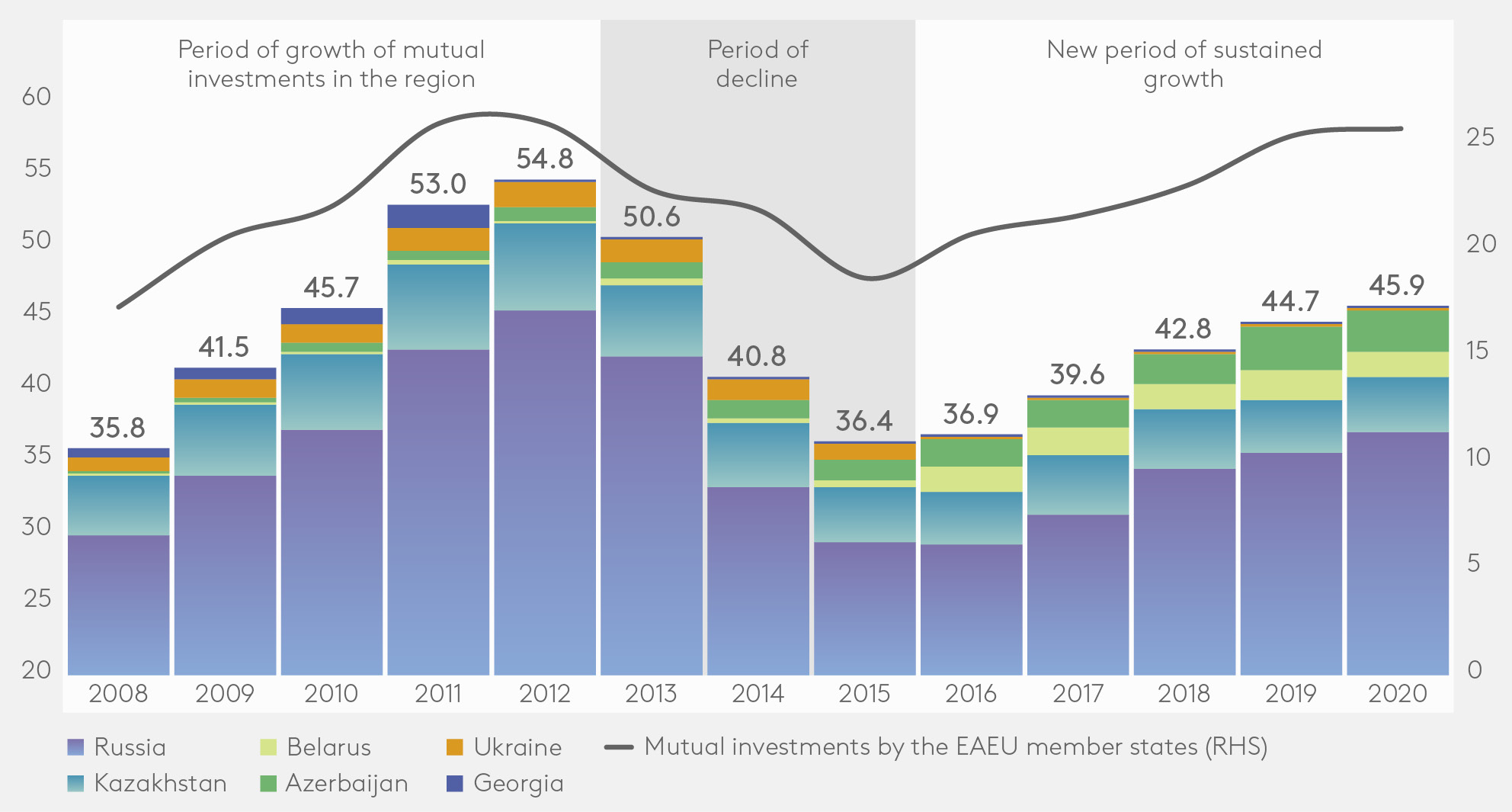 Inward mutual FDI stock originating from other countries is insignificant and included in total FDI stock. Source: the EDB

“Monitoring data show that since 2017, companies in the EAEU have been ensuring an upturn in mutual FDI in the CIS. Between 2016 and 2020, investments by the Eurasian corporate sector led to a 25 percent increase in total mutual FDI in the CIS, to $45.9 billion,” said the report.

The EDB experts note that corporate ties within the EAEU are more intense than those within the CIS. At the end of 2020, the share of mutual FDI stock of EAEU member states in total mutual CIS FDI amounted to 55 percent.

The majority of projects are in trade, financial services, real estate, and machine engineering. The most capital-intensive projects were in the extraction of oil and natural gas as well as the chemical industry.

“In the coming years, the sectoral structure of mutual FDI will gradually become more diversified with the development of retail trade, financial services, and manufacture of machines and equipment,” said Evgeny Vinokurov, Chief Economist at the EDB. “With the growing importance of the global climate agenda, mutual FDI in green economy projects will also grow. Over the past two years, mutual FDI in such projects has increased by 56 percent.”

Kazakhstan takes a leading position not only in the EAEU, but also in Central Asia. 75 percent of all FDI in the region are in Kazakhstan, said President Kassym-Jomart Tokayev on Thursday.

“This has enabled our country to become an economic leader in the region. The most important task facing the government and the diplomatic corps is to strengthen our leadership role in the region. We must step up our efforts in this direction,” he said.