By Staff Report in Kazakhstan Region Profiles: A Deep Dive Into the Heart of Central Asia, Nation on 22 November 2021

NUR-SULTAN – Almaty and the Almaty agglomeration will increase the production of renewable energy and heat supply in the next five years, said Kazakh President Kassym-Jomart Tokayev during his visit to the city’s combined heat and power plant #2 on Nov.19 as part of his working visit to Almaty, reported Akorda. 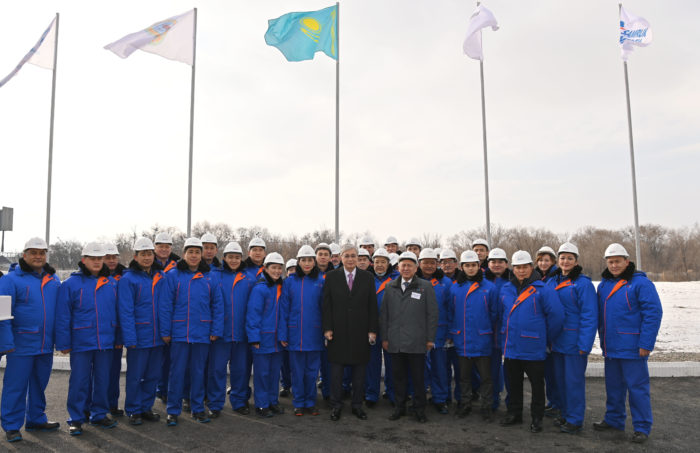 President Kassym-Jomart Tokayev met with the staff of the combined heat and power plant #2 and congratulated them with the launch of the new facility. Photo credit: Akorda.

The President’s visit was marked with the start of the construction of the combined cycle facility, which boasts a capacity of up to 600 megawatts at the station. It is expected that the launch of gas installations at the station will decrease emissions from 50,400 tons to 6,700 tons per year by 2026.

The President said that the construction of a new unit will launch a large-scale modernization of the Almaty energy complex.

Tokayev noted that Almaty is one of the key economic centers of the country and this project should be implemented on time and with high quality.

“This will improve the environment and deliver clean air. I told people that the government will take the necessary actions to solve air pollution issues… I believe this will help to return Almaty to its former status of the greenest and cleanest city and improve the quality of life,” he said.

Kazakhstan presented its green agenda plans at the UN Climate Change Conference (COP26), which was held Oct.31-Nov.12 in Glasgow.

The country is now finalizing its long-term strategy to achieve carbon neutrality by 2060. It is planned to reduce greenhouse gas emissions by 15 percent by 2030. The plans also include a fivefold expansion in energy production from renewables from 3 to 15 percent, doubling the amount of energy produced from environmentally friendly sources from 20 to 38 percent and expansion of the national carbon absorption capacity by planting more than 2 billion trees. A 30-percent reduction in the share of energy generation from coal, from 68.9 to 40.1 percent is also expected.

Kazakhstan also intends to serve as a Central Asian hub to unite regional efforts towards achieving green growth. The country will produce and process rare earth elements (REE) for global supply chains to accelerate the transition to green energy.