NUR-SULTAN – Three rare species of palms with resistance to freezing are being grown as an experiment by the staff of Mangyshlak Experimental Botanical Garden in Aktau city, reports Khabar TV. 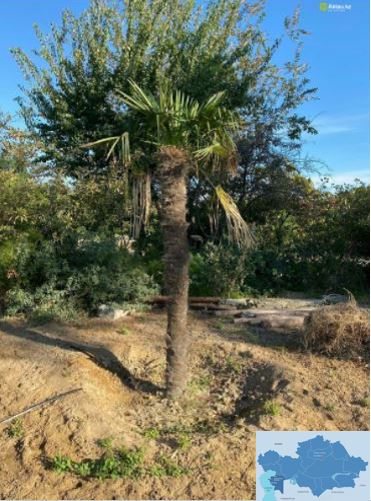 Exotic plants are capable of withstanding an air temperature of minus 10 celsius degrees.

Mangyshlak Experimental Botanical Garden, which has been working since 1972, is the only scientific organization in Western Kazakhstan tasked with solving the issue of mobilization of the gene pool of domestic and world flora in extraarid natural-climatic conditions. More than 1,500 unique species of trees and bushes are grown on 39 hectares here.

The garden’s scientists began introducing the testing of subtropical plants. They planted 12 seedlings of three species of palm trees in the garden brought from abroad. Only two of them could not resist minus 10 degrees temperature in winter, while the other ten continue to grow.

“Over 40 palm trees were delivered to the botanical garden in Almaty from Turkey, but the climate of that area didn’t suit the seedlings, so they gave them to us. Last year we received and planted them. Winter was very cold, but we survived through the first frosts,” said the garden’s director Akzhunis Imanbayeva.

The palm trees with a height of 1.5 metres are being prepared for winter. The garden’s staff wraps the tree trunk with special tissue.

“We give particular attention to the top. This is a method we learnt from our colleagues in Sochi. In general, if the trees will give seeds and seedlings will germinate from the seeds, it might be assumed that the species has started to adapt,” noted Imanbayeva about the results they are expecting to get.

According to the study of the Mangystau region’s climate indicators, the positive temperature was revealed to have remained stable for more than 280 days of the year over the last decade.

This species of palm can be also found on the Black Sea coast in Turkey, Georgia and Russia.

As scientists say, the plastic palms on the Caspian coast might eventually be replaced with real ones, but it will take approximately six years.