By Saltanat Boteu in Business on 11 October 2021

NUR-SULTAN – Heneken, a major Slovak non-ferrous metal recycling and melting company with a history of working with Kazakhstan, sees great new opportunities emerging for even greater cooperation in the future.

Michal Hudoba and and Chairman of the Industrial Property Office of the Slovak Republic Richard Messinger during a visit to the Heneken Melts aluminum smelter in Spišské Vlachy.
Photo credit: napalete.sk.

Heneken experienced difficulties due to the COVID-19 pandemic. Yet, the company, which has 200 employees including an international team of 15 people, was able to avoid a recession.

“This is all thanks to the high-quality work of our large team of traders and, at the same time, the timely optimization of internal processes in the field of finance and trade, which we had to quickly start due to the difficult situation in the markets because of the coronavirus crisis,” said Hudoba in an exclusive interview for this story. “Thanks to our determination and, especially, the solidarity of the sales team, we were able to withstand the difficulties of the past year and achieved historically the best economic results.” 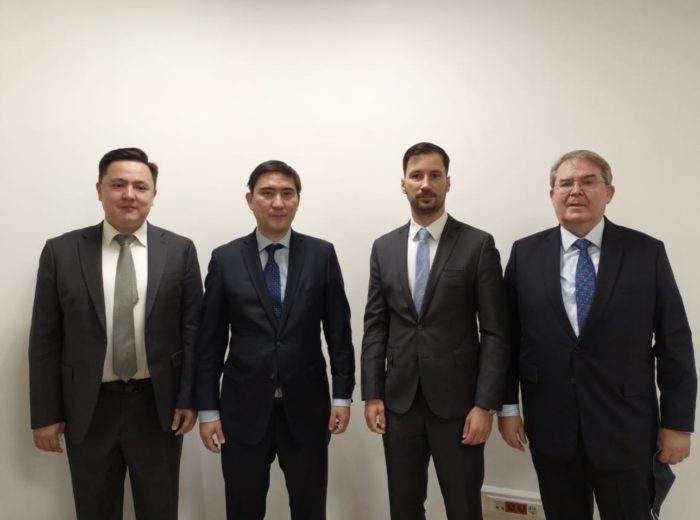 “This year we are focusing on stabilizing and consolidating our production capacity and entering new markets. We have high hopes for the Balkans as we recently opened new offices in Belgrade. But also for Central Asia, and specifically for the rapidly developing Kazakhstan,” said Hudoba.

In the past, Heneken used to work with the Kazakh company Tau-Ken Temir, purchasing silicon from it.

“Heneken has a history of cooperation with Tau-Ken Temir in the Karaganda region and has been its major trading partner,” explained Lukáš Parizek, Heneken’s government relations advisor and a former state secretary (deputy minister) at the Slovak Ministry of Foreign and European Affairs.

“Once the production plant is restarted, Heneken is looking to be a strategic partner and can propose a very promising off take agreement as most of Tau-Ken Temir’s production is designated for the European Union market,” added Parizek.

“Exports are key for us, which is why we are one of the founding companies of the Council of Slovak Exporters, to which we attach great importance, since 90 percent of Slovak GDP (gross domestic product) is exports, not just car manufacturers,” Hudoba explained.

Heneken was founded in 2007 as a trading company. In 2017, the company added a manufacturing component. Today, Heneken is the largest processing company in Slovakia for non-ferrous metals such as aluminum, magnesium, zinc, lead, silicon, deox and aluminum-based prealloys.

Slovak Exports Need Further Diversification, While Cooperation with Kazakhstan Can Be Helpful

Parizek is also the chairman of the Council of Slovak Exporters, an organization he founded in 2020 to provide export services and promotion to the Slovak companies as well as to serve as a platform for analyzing bottlenecks and offering solutions for boosting and diversifying exports. The  council now includes more than 100 companies.

Proceeding from the findings of a September 2021 report put together jointly by the council and the Economic University in Bratislava (EUBA), Parizek noted that Slovak exports face several obstacles. Those include the continuous decline of trade surplus even prior to the COVID-19 crisis, massive underfinancing of export support, duplicities and lack of coordination at the state level and allocation of financing research and development (R&D) at levels more than 60 percent below the European Union average. However, foreign direct investments contributed to boosting the Slovak economy.

Parizek emphasized the importance of diversification of commodities in addition to applying territorial perspective to trade.

“This is more an export from Slovakia, rather than a Slovak export,” he said of the car sales from Slovakia, which make up the largest share of its exports. “We need to diversify (trading) not only from the territorial perspective but also commodity-wise.”

Earlier this year, the council signed a memorandum of cooperation with QazTrade Trade Policy Development Center, and on a recent visit to Kazakhstan leaders of the two organizations discussed specific ways to strengthen mutual exports and ties.

“We agreed on a reciprocal business delegation to Slovakia with QazTrade, as we have now been in Kazakhstan. There are plenty of opportunities lying ahead of us, we just need to capitalize on them,” said Parizek.

Hudoba and Parizek were in Nur-Sultan last month to participate in the Kazakhstan Industry Week.

“It was a very good event. I think more expos like this should be organized, because the corona crisis kept us all sitting at home for more than a year. We had a very busy two days full of meetings and had only a couple of hours to see the city. We have been very impressed and used the opportunity to see Nur-Sultan from the Baiterek tower. We will definitely return to see also Almaty and the countryside,” said Parizek.