NUR-SULTAN – President Kassym-Jomart Tokayev signed the decree on national projects on Oct.13, according to Akorda Press. 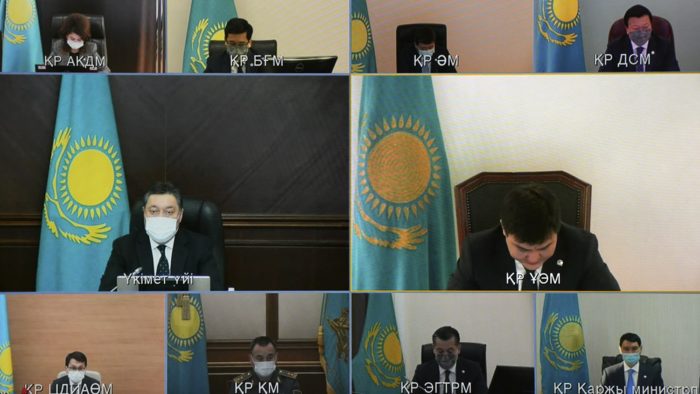 The government meeting was dedicated to the national projects and its implementation on Oct.12.

Prime Minister Askar Mamin recalled that President Tokayev instructed his government ensure the transition from state programs to national projects in his address to the people in 2020. The government has done a lot of work to implement the new state planning system.

The Ministry of National Economy developed three national projects. These are the Sustainable Economic Growth, Entrepreneurship Development, and the Strong Regions – the Driver of Country’s Development.

Sustainable Economic Growth covers five areas including industrial and innovative development, the petrochemical and energy sectors, the geological industry, and the promotion of non-resource exports. The project is aimed at ensuring economic growth of at least 5 percent by 2025.

The Ministry of Agriculture has been involved in the project aimed at development of the agri-industrial sector for 2021-2025. It is expected to increase labor productivity by 2.5 times, support domestic production of basic food products, increase the export of agricultural products two-fold and bring the share of processed products to 70 percent. An increase in the income of 1 million rural residents will be ensured through the formation of seven large ecosystems and the implementation of investment projects.

The Ministry of Ecology, Geology and Natural Resources developed the Green Kazakhstan project. Its mission is to create a cleaner environment for people and solve other environmental issues.

Emissions are to be reduced at the 16 largest industrial enterprises by 20 percent in five years, more than 8,000 separate collection containers are to be installed, and the share and utilization of solid waste raised from 18 percent to 34 percent.

The list of national projects also include the Technological Breakthrough Due to Digitalization, Innovation and Science, Bilimdi Ult (educated nation), Healthy Nation and the Rukhani Zhangyru (modernization of public consciousness) programs.

It is expected that the implementation of the national projects will increase the stability and competitiveness of the economy, and improve the quality of life for ordinary people.

Both budget financing and private investments will be provided.