NUR-SULTAN – The Deputy Prime Minister – Minister of Foreign Affairs of Kazakhstan Mukhtar Tileuberdi participated in an extraordinary meeting of the Council of Foreign Ministers of the Cooperation Council of Turkic Speaking States on Sept. 27 that discussed the situation in Afghanistan, reports the Kazakh Foreign Ministry press service. 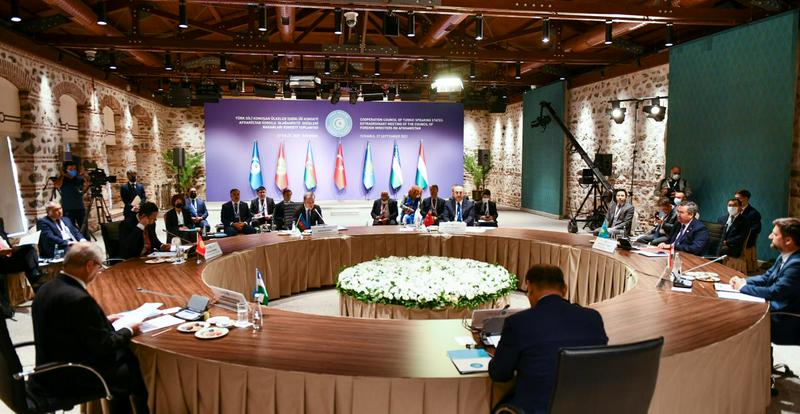 The ministers during the meeting. Photo credit: Kazakh Foreign Ministry

The ministers focused their discussion on regional security and coordination of actions in the context of the Afghan agenda.

In his speech, Tileuberdi said that Kazakhstan is ready to cooperate with Turkic countries in assisting Afghanistan. He said that “Kazakhstan continues to contribute to international efforts to stabilize the situation in Afghanistan, primarily in the humanitarian sphere and under the central coordinating role of the United Nations.”

He emphasized Kazakhstan’s commitment to providing assistance to Afghanistan through existing UN structures.

The meeting noted the need to monitor the development of the situation taking into account the risks of terrorism, illicit trafficking of weapons and drugs, illegal migration, and the flow of refugees.

Wrapping up the meeting, the ministers adopted a joint statement where they confirmed their readiness to “contribute to all efforts to assist the Afghan people in their endeavor to achieve lasting peace, national reconciliation, stability, and development.”

In their joint statement, the ministers also said that they “encourage efforts ultimately aiming for the establishment of an Administration that is united, inclusive, and representative, reflecting the rich diversity of the Afghan nation.”

“(We) emphasize the need to ensure that effective measures are continuously being taken in Afghanistan to prevent and combat terrorist organizations such as DAESH and Al Qaida in Afghanistan and prevent them from moving to neighboring states, stress the need to prevent illegal production and trafficking of narcotic drugs in Afghanistan,” said the statement.

The ministers said they will maintain consultations and coordination regarding the developments in Afghanistan.

Established in 2009. the Turkic Council is an intergovernmental organization, with the overarching aim of promoting comprehensive cooperation among the Turkic Speaking States. Its four founding member states are Azerbaijan, Kazakhstan, Kyrgyzstan, and Turkey. In October of 2019, Uzbekistan joined the council as a full member and in September 2018, Hungary received observer status at the Turkic Council.