By Zhanna Shayakhmetova in Nation on 2 September 2021

NUR-SULTAN – Kazakh political analysts have observed that the initiatives and instructions laid out in President Kassym-Jomart Tokayev’s Sept. 1 address-to-the-nation clearly outline the key priorities for further socio-economic development of the country. 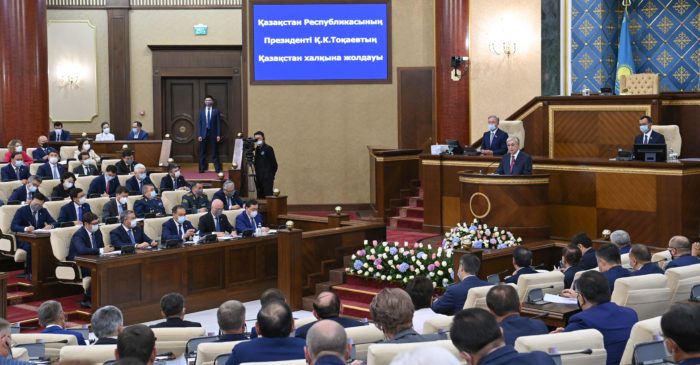 President Tokayev delivered his State of the Nation Address to the people of Kazakhstan titled “Unity of the people and systemic reforms are a solid foundation for the nation’s prosperity” at a joint session of the Parliament chambers on Sept.1. Photo credit: Akorda Press.

According to the experts, the implementation of this plan will further increase the stability and competitiveness of the economy, prosperity and improve the quality of life for the people.

“The address covers all key areas of the country’s development,” Aide to the President Erlan Karin wrote on his Telegram. “The President set the goal for effective subsoil use, further privatization, solving the problems in the agri-industrial sector, and a qualitative reboot of the digitization process of the economy and the public sector.”

Karin noted that the address is a major program document, which reflects both long-term goals and priorities for the current period. “Strengthening national unity and further reforms” have become the main takeaway of the President’s address.

The annual address of the head of state is meant to serve as an impetus to induce action, according to Director of Kazakhstan Institute for Strategic Studies (KazISS) Zarema Shaukenova.

“The speech outlines a large layer of tasks related to our need to be prepared for external shocks. The head of state spoke about the challenges that we should be considering in solving the strategic tasks related to the development of our country,” she said.

Shaukenova feels that it is necessary to develop methods of counteracting those global processes and trends that pose various kinds of threats to the economic, political, social stability and sustainable development of the country.

“We are now entering a decisive stage in our development. The government should operate as a single unit. In this way we can ensure the achievement of the goals,” added Shaukenova.

Political expert Eduard Poletaev noted that the address has a special place in the history of the country since it has a direct impact not only on the authorities, but also on each person.

“The objective of the state’s social policy is to improve the health of the nation, to provide financial support in some situations and to create confidence for the population in its economic future. This objective is reflected in the message and will be implemented,” Poletaev wrote on his Facebook.

The expert believes that proposals concerning the specific socio-economic interests of the people help to ensure their continued political involvement. People are able to better comprehend the ongoing reforms with the help of the president’s address and then, they start supporting the proposed measures of the government.

The measures to stimulate businesses by increasing the wage fund are one of the most important initiatives of the head of state, says expert of the KazISS Bekzhan Sadykov.

The problem of growing inflation is a very sensitive issue for people and “this initiative looks fair, considering the growth of profits of business owners by 60 percent,” noted the expert.

Decreasing the burden on the payroll also sounds like a good proposal for many. This will boost entrepreneurship. “These initiatives demonstrate that the President pays special attention to ensuring the well-being of the general population,” said Sadykov.

Political expert Vyacheslav Dodonov also noted that economic development is one of the most important focuses of the address.

“The measures to support the population and business amid the ongoing COVID-19 pandemic through the Economy of Simple Things and Business Roadmap programs, which were extended through 2022, are essential. These programs have provided support last year, and will continue to support employment and production in key sectors of the economy with government assistance,” Dodonov said.

Chief editor of Zeren and Zerdeli Zerendi newspapers and Chairperson of the club of journalists of the Akmola Assembly of the People of Kazakhstan Svetlana Kim said that the unity of the people of Kazakhstan is “a key word in the President’s address.”

Kim noted that there are many tasks and each task requires action, competence, and the dedication of every person. “It is important to maintain unity and harmony in society. The situation in Afghanistan showed once again how fragile the world is and how people need support and protection. Let’s not forget this and not forget to treat each other with respect, as we have always done,” Kim told Kazinform.