By Anuar Kalmykov in International, Kazakhstan’s Independence: 30 Years on 9 September 2021

NUR-SULTAN – Kazakhstan has become a recognized leader of the global movement for the non-proliferation of nuclear weapons and their complete elimination since the years of independence. 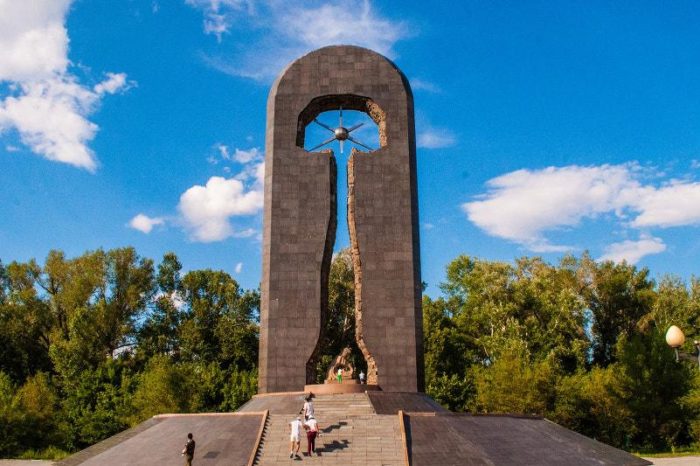 The “Stronger than Death” monument is a memorial to the victims of nuclear tests at the Semipalatinsk nuclear test site. It was opened on August 29, 2001, in Semey.

This year marks a major historical anniversary related to the non-proliferation of nuclear weapons. The world community celebrated the 30th anniversary of the closure of the Semipalatinsk Test Site on Aug. 29. The Central Asian Nuclear-Weapon-Free Zone (CANWFZ) will celebrate its 15th anniversary Sept. 8.

Kairat Sarzhanov, the director of the department of international security of the Kazakh Ministry of Foreign Affairs of Kazakhstan spoke about the creation of the CANWFZ in the region and its significance in an interview with Kazakhstanskaya Pravda.

Kazakhstan, Kyrgyzstan, Tajikistan, Turkmenistan and Uzbekistan signed the Treaty on the Central Asian Nuclear-Weapon-Free Zone (CANWFZ) in Semipalatinsk on Sept.8 in 2006. 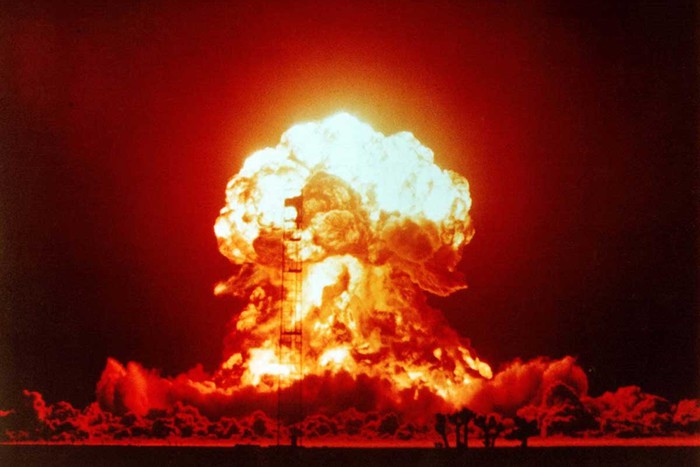 Kazakhstan has significantly suffered from nuclear weapons tests. Overall, 468 air, ground, and underground tests were carried out on the territory of our country (456 tests at the Semipalatinsk Test Site).

“We call it the Treaty of Semipalatinsk after the place of its signing. The treaties on the establishment of the other four previously established nuclear-weapon-free zones have similar names – these are the treaties of Tlatelolco, Bangkok, Rarotonga and Pelindaba,” said Sarzhanov.

The parties to the Treaty of Semipalatinsk issued a statement to mark the 15th anniversary of the creation of the CANWFZ this year.

In the statement, the countries of the region reaffirmed their commitment to the historic Treaty on the CANWFZ, and noted the important and decisive role of the Treaty on the Non-Proliferation of Nuclear Weapons (NPT), which is the cornerstone of international efforts to prevent the proliferation of nuclear weapons and ultimately their complete elimination. 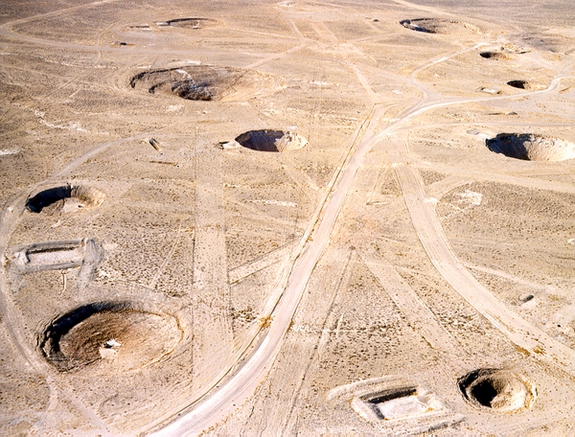 The ministers expressed their continued support for the activities of the International Atomic Energy Agency (IAEA) in promoting cooperation in the peaceful use of the atom, the application of safeguards and control over nuclear programs, and noted the entry into force of the new Treaty on the Prohibition of Nuclear Weapons (TPNW).

The parties called on their American partners to complete the ratification process of the Protocol on Negative Security Assurances to the Treaty on the CANWFZ as soon as possible. Moreover, they asked the States listed in Annex 2 of the Comprehensive Nuclear-Test-Ban Treaty (CTBT), on which the entry into force of the Treaty depends, to take measures to sign and ratify it as soon as possible.

“Given the current international tension and the threat of terrorist organizations acquiring nuclear weapons and their components, these messages are very relevant,” he added.

It is planned to register this joint statement as an official document of the 76th session of the UN General Assembly and distribute it to all its member states.

According to Sarzhanov, the creation of the CANWFZ was made possible primarily due to the initiative of the parties to the treaty themselves, which increased the role and importance of Central Asia in the international arena and, above all, in the non-proliferation of nuclear weapons.

At the same time, the starting point in the process of gaining a nuclear-weapon-free status for the region was the decision of First President of Kazakhstan Nursultan Nazarbayev to close the Semipalatinsk Nuclear Test Site on Aug. 29, 1991. Years later, by a resolution of the UN General Assembly, August 29 was declared the International Day against Nuclear Tests.

Kazakhstan has significantly suffered from nuclear weapons tests. Overall, 468 air, ground, and underground tests were carried out on the territory of our country (456 tests at the Semipalatinsk Test Site). To this day, the lingering effects of these tests remain.

Following the closure of the test site, after gaining independence, Kazakhstan voluntarily renounced its fourth largest nuclear stockpile in the world, inherited from the Soviet military machine. This arsenal included, in particular, over 110 intercontinental ballistic missiles with 1,200 warheads capable of reaching any point on earth.

In cooperation with the United States and Russia, warheads, bombs and nuclear explosive devices were disposed of and removed from the territory of Kazakhstan, and delivery vehicles and launchers were destroyed.

Following the closure of the Semipalatinsk Test Site, all the leading nuclear powers suspended nuclear tests, and some of the test sites were mothballed. This created the conditions for an international legal ban on conducting nuclear tests on a global scale. All this paved the way for the adoption of the CTBT in 1996.

Development of the nuclear-free zone in Central Asia

Following the results of the international conference held in Tashkent in September of the same year, a Group of Experts was established to prepare the main provisions of the relevant treaty. The discussion of its text took place in Ashgabat, Samarkand and Geneva with the active assistance and under the auspices of the United Nations. At various times, the UN General Assembly adopted the relevant resolutions.

“Following many years of work of many diplomats from the countries in the region, the Treaty on the CANWFZ, which entered into force in March 2009, was signed in Semipalatinsk Sept. 8 in 2006, Then Minister of Foreign Affairs of Kazakhstan, now the Head of our State Kassym-Jomart Tokayev signed the Treaty on behalf of Kazakhstan,” he said.

The signing of the Protocol on Negative Assurances to the CANWFZ Treaty by representatives of the five nuclear-weapon states – Great Britain, China, Russia, the United States and France – at the UN headquarters in New York on May 6, 2014, became an important step in the institutionalization of the zone.

“A major step in the legal process of forming the zone was made, and the five nuclear powers have given assurances not to use nuclear weapons and not to threaten to use them against the five parties to the Treaty,” Sarzhanov explained. “Last year, in his speech at the UN General Assembly, President of Kazakhstan Tokayev urged the nuclear powers to ratify the protocols to the treaties on nuclear-weapon-free zones, including Semipalatinsk.”

“Our countries intend to continue their efforts to strengthen the role and importance of the CANWFZ. In particular, work is underway in this direction to establish cooperation with other nuclear-weapon-free zones. This is stated in a Joint Statement following the Consultative Meeting of the Heads of State of Central Asian states held in Turkmenbashi in August this year,” he said.

On Aug. 28-29, 2019, the Kazakh Ministry of Foreign Affairs, working jointly with the United Nations Office for Disarmament Affairs (UNODA) organized a seminar on the topic Development and Strengthening of Consultation Mechanisms between Existing Nuclear-Weapon-Free Zones in Nur-Sultan. The event was held with the participation of representatives from all existing NWFZs, Mongolia and experts.

Currently, the possibility of signing memorandums of understanding between the NWFZ and the African Commission on Nuclear Energy (AFCONE), as well as between the NWFZ and the Agency for the Prohibition of Nuclear Weapons in Latin America and the Caribbean (OPANAL) is being considered. Its aim is to strengthen the global nuclear non-proliferation program by combining international efforts to ensure peace and security.

Nuclear free zones in other parts of the world

The establishment of nuclear-weapon-free zones is one of the most effective tools in the field of disarmament and non-proliferation of weapons of mass destruction, noted Sarzhanov.

In addition, after the adoption of the treaties on Antarctica (1959), on Outer Space (1967) and on the Seabed (1971), these territories were recognized as nuclear-free zones. Moreover, Mongolia unilaterally proclaimed nuclear-weapon-free status.

Kazakhstan is a leader in the field of disarmament, non-proliferation and peaceful use of atomic energy

This year marks the 30th anniversary of Kazakhstan’s independence. During this period, the country has formed its own effective model of the path to achieving a world free of nuclear weapons.

“We offer this model to all countries of the world,” said Sarzhanov. “It includes the following basic foundations. First, a voluntary decision to close the Semipalatinsk Nuclear Test Site, renounce the possession of nuclear weapons and prohibit their deployment. We have created and strengthened our newly-independent country, and achieved international respect without nuclear weapons.”

Kazakhstan is a party to all fundamental international treaties in the field of nuclear disarmament, non-proliferation and the peaceful use of atomic energy.

Kazakhstan’s denuclearization model was based on our country’s international cooperation with Russia, the United States and other countries, as well as international organizations. Kazakhstan, with the assistance of the international community, including the UN, the IAEA and donor countries, has been fighting the negative consequences of the nuclear tragedy for almost three decades.

“Our country, having renounced its nuclear status, has retained the opportunity to develop civilian nuclear energy and the production of nuclear fuel. By supporting the initiative of the IAEA, Kazakhstan has placed a Bank of Low-Enriched Uranium on its territory,” Sarzhanov said.

In view of the stalemate in the process of nuclear disarmament, 122 UN member states developed and adopted the TPNW, which entered into force in January 2021. Kazakh diplomats also took part in the negotiations on its text. The Treaty establishes an international legal prohibition on nuclear weapons, thereby outlawing them, and is considered a real step by like-minded States to implement their obligations under NPT Article VI.

The article was originally published in Russian in Kazakhstanskaya Pravda newspaper.