By Staff Report in Society on 8 September 2021

NUR-SULTAN – The United Nations (UN) in Kazakhstan announced winners of the Change for Climate media contest on the International Day of Clean Air for Blue Skies, which is celebrated globally on Sept.7. 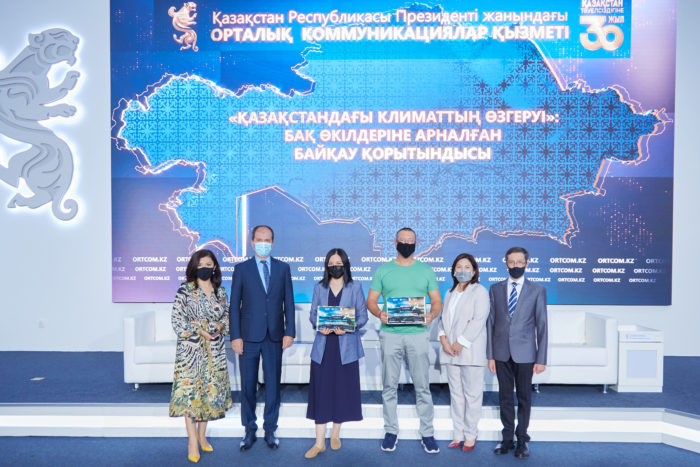 The contest recognized the best journalists in the print and online media whose stories raise awareness about the threats posed by climate change to Kazakhstan and suggest solutions to reverse climate change.

“The winner of the first place prepared a wonderful article based on a human-interest story of an entrepreneur from the Almaty region, who’s been involved in beekeeping for over 10 years,” UN Resident Coordinator in Kazakhstan Michaela Friberg-Storey said, describing Shayakhmetova’s story “Small Steps, Big Changes” during the award ceremony. “This is one of those inspiring examples of combining economic value and respect for ecosystems and biodiversity providing benefit for both people and nature.”

Shayakhmetova also has the opportunity to represent The Astana Times at the 2021 United Nations Climate Change Conference (COP26) in Glasgow in November if the COVID-19 pandemic situation improves.

Overall, more than 50 articles were submitted in the Kazakh, Russian and English languages. The organizers noted that they received thought-provoking, informative, knowledge-based texts.

“We have evaluated them based on their creativity, level of research and also to which extent we felt that article inspires state officials, business and business, and importantly, individuals to take actions,” Friberg-Storey added.

Friberg-Storey said that climate change is widespread, rapid and intensifying. This requires immediate actions from all nations. In this light, journalists play a key role in getting the debate and the knowledge about how important climate change is for all. Ahead of the COP26 climate conference, all nations need to join the net zero emissions coalition and reinforce their commitment to slowing down and reversing global climate change.