Afghanistan: Kazakhstan is a Factor of Balance in a Destabilized Region​

An editorial in La Revue des Transitions, a French news website, notes the constructive role that Kazakhstan with its rich and successful experience in peacekeeping diplomacy is able to play its part in solving the Afghan issue. 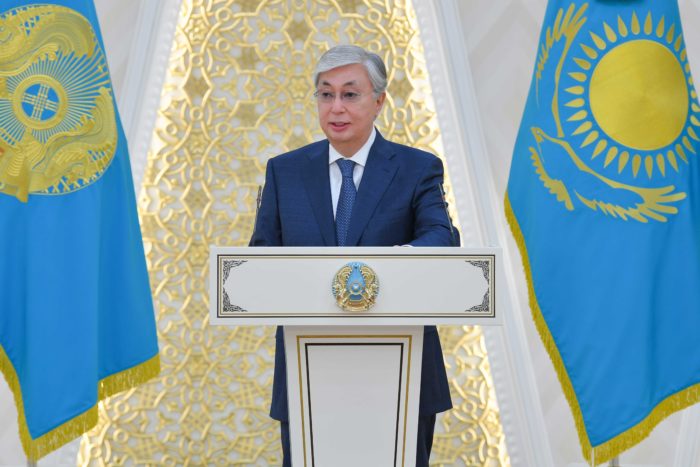 President Tokayev said Kazakhstan is ready to cooperate with countries to stop the spread of violence, drug trafficking, and uncontrolled migration out of Afghanistan during the ceremony of receiving credentials from newly appointed envoys in Akorda on Sept. 8. Photo credit: Akorda Press.

With the withdrawal of the U.S. troops from Afghanistan, regional powers are making their moves and strengthening their influence in Central Asia despite the risk of the resumption of old conflicts.

Discreet but effective Kazakh diplomacy could once again become a factor of balance on the back of its experience as a mediator in the Syrian and Ukrainian crisis.

It has been more than two weeks since the Taliban recaptured Kabul. Despite an extensive campaign of Muslim fundamentalists who now rule almost the entire territory of Afghanistan, the developments in the country indicate that it is descending into chaos day by day.

An editorial in La Revue des Transitions, a French news website, notes the constructive role that Kazakhstan with its rich and successful experience in peacekeeping diplomacy is able to play its part in solving the Afghan issue.

Despite the fact that the new owners of Kabul provide some semblance of order and security, the State is in complete ruin. Civil servants are not paid their salaries. Vital infrastructure is often faulty, entire provinces are deprived of electricity. Drought and famine are rampant, threatening the lives of tens of millions of Afghans, a third of whom face food insecurity.

UN Secretary-General Antonio Guterres has officially expressed concern about a possible “humanitarian catastrophe”. As Afghanistan descends into crisis, its neighbors are trying to use the situation to their advantage.

The regional powers of Central Asia see the withdrawal of the U.S. troops as a historic opportunity to strengthen their geostrategic position or even radically change alliances and diplomatic primacy.

Nature abhors vacuum, hence Pakistan, Iran, China, Russia, India and Turkey are making reasonably discreet plans to benefit from the departure of Uncle Sam from the region, which is fraught with risk of reviving old dormant conflicts, such as the confrontation between two nuclear players, Delhi and Islamabad, in the mountainous region of Kashmir. These plate tectonics, playing a factor of instability, undermine the fragile balance in the region that has received increased attention and is the subject of international stakes.

One country seems to want to ease tensions in this big game of geopolitical upheavals, while others, on the contrary, fan the Afghan burning bonfire.

Kazakhstan, a huge country – five times larger than France, can really establish itself as a stabilizing element in Central Asia, which is shackled by the greatest uncertainty so far. This country is France’s first and only strategic partner in the region and contributes to the strengthening of the “security belt” that protects Europe. This is evidenced by the telephone conversation between Emmanuel Macron and his colleague Qasym-Jomart Toqayev held on August 31.

According to Elysee Palace reports, “The two presidents discussed the situation in Afghanistan and its implications for Central Asia. They expressed their desire to work together to ensure security and stability in the region.”

This is also demonstrated by the decision of the UN to relocate the personnel of its humanitarian mission from Afghanistan to Almaty, the largest city of Kazakhstan, where they will be able to continue to provide “vital assistance to millions of people in need,” to quote Antonio Guterres.

If Kazakhstan takes a hold of the Afghan dossier, its central role in the concert of nations could resemble the one it has played during previous international crises.

In 2013, Almaty held two rounds of negotiations, which brought together the permanent members of the UN and representatives of Iran, Germany and the EU countries at the same table and created the opportunity for the signing of a historic treaty on the Iranian nuclear program.

Minister of Foreign Affairs of Russia Sergey Lavrov said at the time that the host countries of the negotiations (Kazakhstan, Austria, and Switzerland) played a crucial role in reaching a consensus. In 2017, it was in Astana, the capital city of Kazakhstan that the Syrian peace process began. Former President Nursultan Nazarbayev took up this issue from the very beginning of the civil war in Syria in 2011, successfully emphasizing the central geographical position and neutrality of his country.

The Head of State worked behind the scenes to allow his two powerful neighbors and partners, Vladimir Putin and Recep Tayyip Erdoğan, to come to the negotiating table. A good move from a diplomatic standpoint, which contributed to strengthening the reputation of Astana amongst the administrative offices of the world. Kazakhstan’s intervention in the Syrian crisis transformed an attempt made in 2014 with France in an attempt to defuse the situation over the Ukrainian dossier.

The President of the former Soviet Republic was the “godfather” of the Minsk process, calling for an end to international sanctions against Moscow and encouraging Francois Hollande, Angela Merkel, Petro Poroshenko and Vladimir Putin to meet and come to a compromise.

This is all done under the concept of multi-vector diplomacy, which is tremendously valuable for Kazakhstan. Even if the victory of the Taliban in Afghanistan makes it too soon to make any concrete predictions, there is no doubt that the capital of Kazakhstan will once again seek to establish itself as a stabilizing agent in the region.

“Kazakhstan believes that Afghanistan must become a stable, sovereign, and united state, living in peace with itself and with its neighbors,” said President Tokayev on Wednesday, September 8. “We are ready to establish constructive business contacts with the new authorities, first of all, to solve acute humanitarian problems faced by this country that has suffered for a long.”

The article was originally published in French in La Revue des Transitions.