By Assel Satubaldina in Astana, Kazakhstan’s Independence: 30 Years on 7 July 2021

NUR-SULTAN – As the Kazakh capital Nur-Sultan celebrates its 23 year anniversary, several monuments were opened in the city to commemorate the date, reports the Akorda press service. 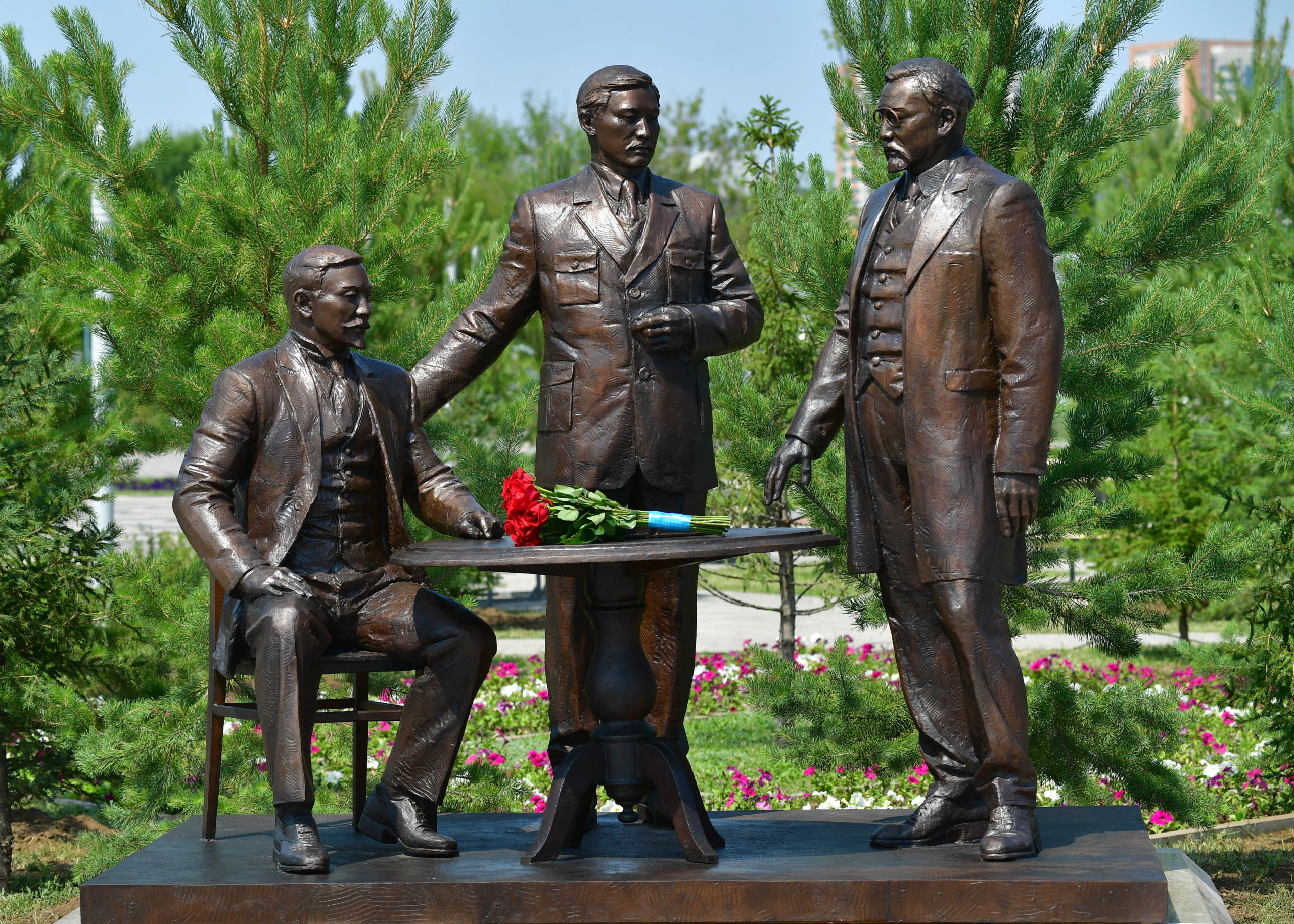 Alash founders advocated for the Alash Autonomy on the territory of the present-day Kazakhstan. Photo credit: Akorda press service

President Kassym-Jomart Tokayev opened the monument dedicated to Alash movement leaders on the eve of Capital’s Day. The monument is located on the Kalamgeler Alley at the intersection of Abay Avenue and Sembinov Street.

The Alash movement was established by the emerging national intelligentsia Akhmet Baitursynuly, Alikhan Bokeikhan, and Myrzhaqyp Dulatuly in 1917. The party lasted through August 1920.

The trio were also the founders of the Qazaq weekly journal published from 1913 until March 1918, when it was closed by the Soviet government.

The founders sought reforms in the Kazakh lands as a first step on the path of the Kazakh people towards autonomy and independence.

“Alikhan was a statesman who headed the government of Alashorda. Akhmet was a well-known educator who became the spiritual teacher of the nation. Mirzhakyp is a talented writer, author of the book ‘Oyan Qazaq’ and the first Kazakh novel, which embodied the idea of national unity. All of them are outstanding historical figures. This monument is a tribute to all the heroes of the Alash movement,” said Tokayev addressing the opening ceremony, 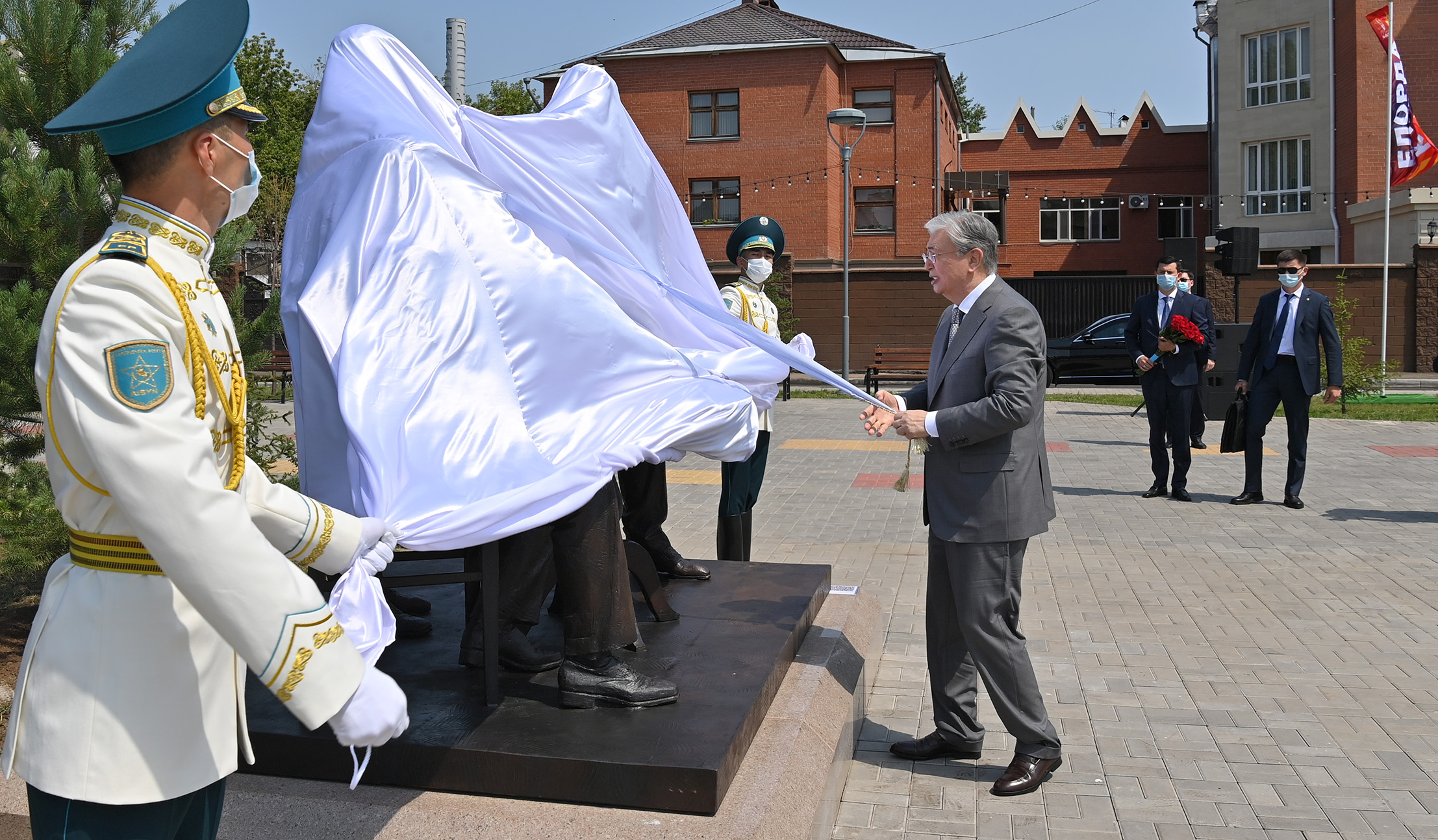 He emphasized the significant contribution of Alash leaders in the spiritual revival of the nation.

“They did a lot to liberate and prosper our country. They awakened people’s spirits and transformed their worldviews. They have helped preserve the integrity of our territory. They raised our native literature and culture to an unprecedented level. They contributed to the intellectual rise. The Alash activists, despite the difficulties of their time, revived the idea of statehood of the Kazakh people,” said Tokayev.

The Alash leaders fell victims to Stalinist repression. Bokeikhan and Baitursynuly were shot in 1937 and Dulatuly, who was arrested in 1928, died in the Solovki labor camp in 1935.

“Their works were destroyed, and for many years it was forbidden to say their names. However, our people were able to restore the names of their great sons. Over the years of Independence, the history of the Alash movement and its spiritual legacy have been revised. Several years ago we celebrated the 100th anniversary of the Alash autonomy. This year, the 155th anniversary of Alikhan Bokeikhan is being celebrated as part of the independence anniversary,” said Tokayev.

Tokayev called for a more in-depth study of the works written by Alash leaders. These works, he said, reflect the interests of the country and its well-being as eternal values.