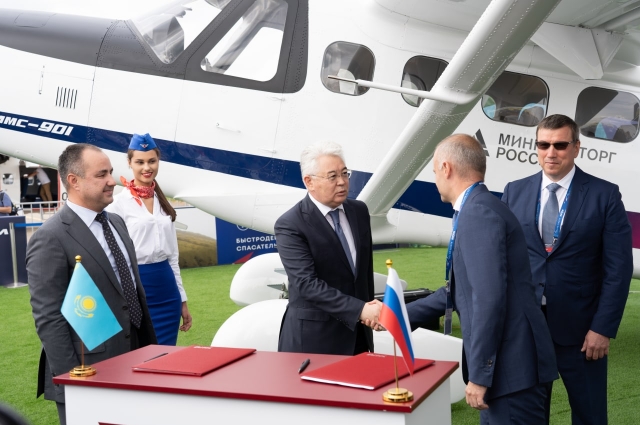 Per the agreement, KAI acquired 20 percent in the Baikal-Engineering enterprise, the developer of the Baikal aircraft. The aircraft will be sold on both domestic and international markets and will become a new versatile regional aircraft designed to operate on local lines away from central cities.

Starting from 2024, the Kazakh company will be responsible for the final assembly of the aircraft and for delivery to markets, including potential clients in Eastern Europe and Africa. In addition, KAI will act as a supplier of a number of units for the plane.

“The signing of this agreement is a step demonstrating the intention of Kazakhstan to develop the aviation industry together with Russia. The technological development that the republic has received in recent years allows us to claim a certain role in making our own contribution to this project,” said General Director of KAI Daniyar Amangildin.

KAI has also reached an agreement for scientific and technical cooperation between the company and the Russian Central Aerohydrodynamic Institute (CAI). The two parties agreed on participation in research projects and the development of unmanned aerial vehicles and flight simulators.

This year, Kazakhstan acted as a partner country of MAKS-2021 due to its close work with Russia in implementing mutually beneficial projects in the field of aviation and astronautics, including the assembly of helicopters of the Mi family and the joint Baiterek project for launch services from the Baikonur cosmodrome.

Kazakhstan’s Gharysh Sapary national space company has also managed to secure new partnerships during the course of MAKS-2021. It reached an agreement with the Russian Center for Aviation Science on joint Russian-Kazakh programs in the field of space exploration.