By Akmaral Arystanbekova in International, Kazakhstan’s Independence: 30 Years on 27 July 2021

Joining the United Nations is the most prominent and indisputable recognition by the international community of the independence of a new state. As is well known, Kazakhstan was admitted to this key international organization of the modern world on March 2, 1992. 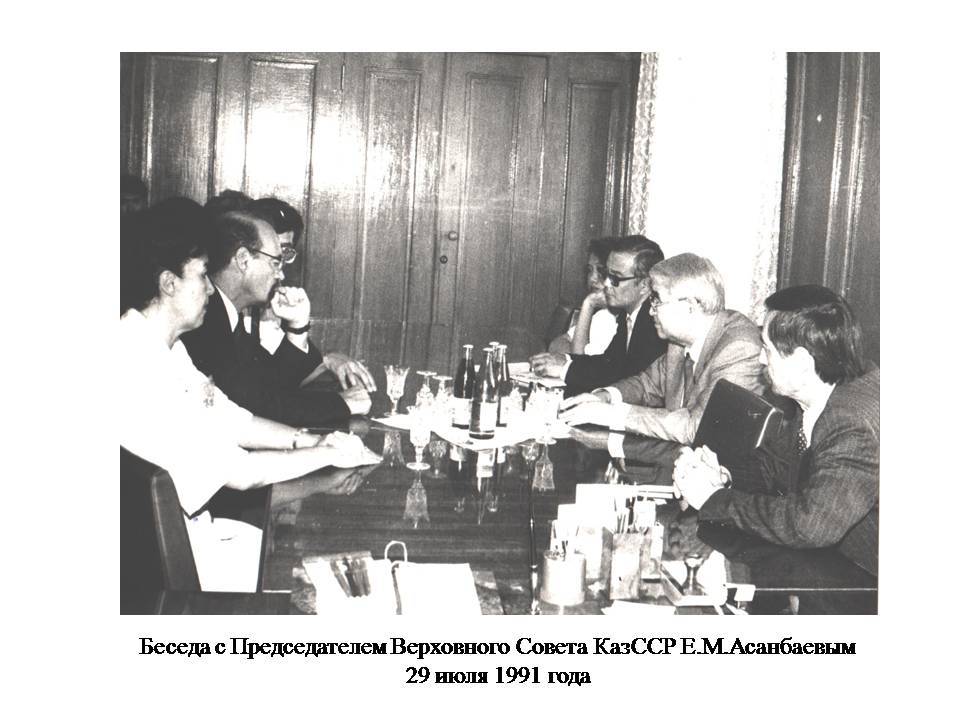 Peter Hansen, Executive Director of the UN Centre on Transnational Corporations (сеnter left), during his meeting with Chair of Supreme Council of Kazakh SSR Yerik Asabayev. Photo credit: Akmaral Arystanbekova (on the left)

However, today it is worth being reminded of one not so well known but remarkable chapter on this path – the very first visit of a high-ranking representative of the UN Secretariat to Kazakhstan, which took place several months before the proclamation of our country’s independence.

This event took place on July 25-30, 1991, when at my invitation, Peter Hansen, the Executive Director of the UN Centre on Transnational Corporations, visited Kazakhstan. I met him during my participation as a member of the Soviet delegation in the 45th session of the UN General Assembly in New York in the autumn of 1990, as the Minister of Foreign Affairs of the Kazakh SSR.

Peter Hansen is a Danish citizen and professor at the University of Odense (perhaps his most famous compatriot was born in this city – Hans-Christian Andersen). From 1978 to 1988 he worked as Assistant Secretary General of the United Nations for Planning and Program Coordination. In 1985, he headed the UN Centre on Transnational Corporations, and in 1994, he was appointed UN Under-Secretary-General for Humanitarian Affairs. 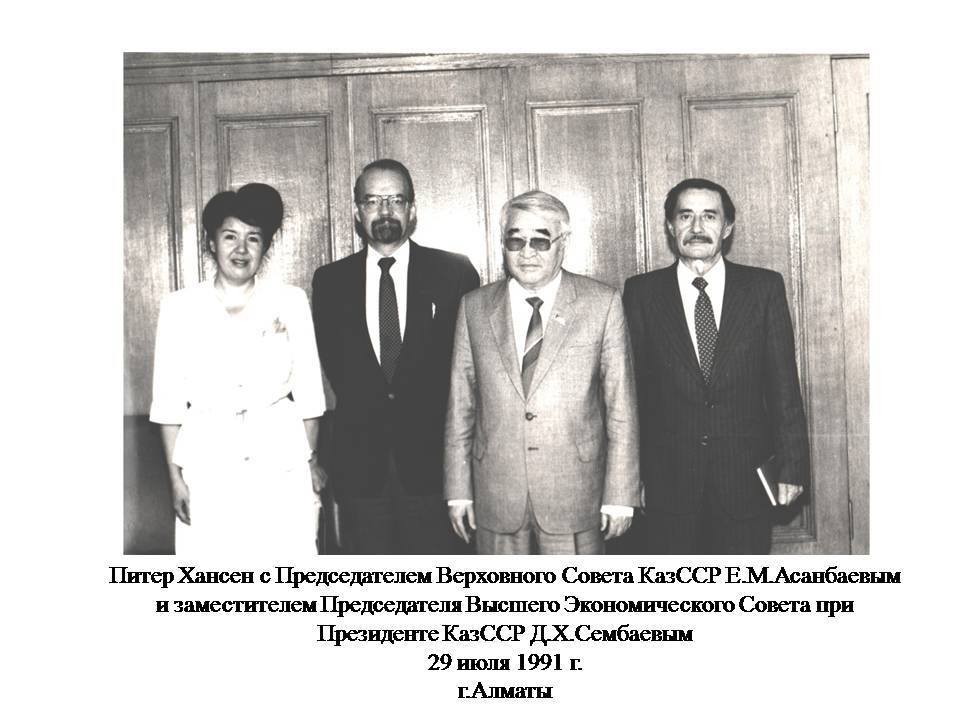 During the visit, Peter Hansen got acquainted with the socio-economic situation of our country, met with its leadership and discussed the establishment of cooperation between Kazakhstan and the UN Centre, which he headed, in the field of creating the foundations of a market economy and developing legislation on international economic activity.

On July 25, 1991, upon arrival in Alma-Ata, Peter Hansen met with the Deputy Prime Minister of the Kazakh SSR, Karatai Turysov. Their meeting was attended by the Deputy Chairman of the Supreme Economic Council under the President of the Kazakh SSR, Daulet Sembaev, Minister of Transport Nigmatzhan Isingarin and other officials of the government’s economic bloc. During the meeting, as per my notes, issues of interest to the Kazakh side were discussed, including the transition to a market economy and the development of foreign economic activity of the country.

In 1989, on the instruction of the First President, Nursultan Nazarbayev, the government developed the Conception of foreign economic activity of the republic, on the basis of which the Program for the development of foreign economic activity of the Kazakh SSR was adopted. One of its main provisions was the creation of free economic zones on the territory of Kazakhstan and the attraction of foreign investment, in connection with which it was necessary to prepare an appropriate legislative framework. As such, an expert assessment of a prominent UN structure in this regard was undoubtedly in demand. 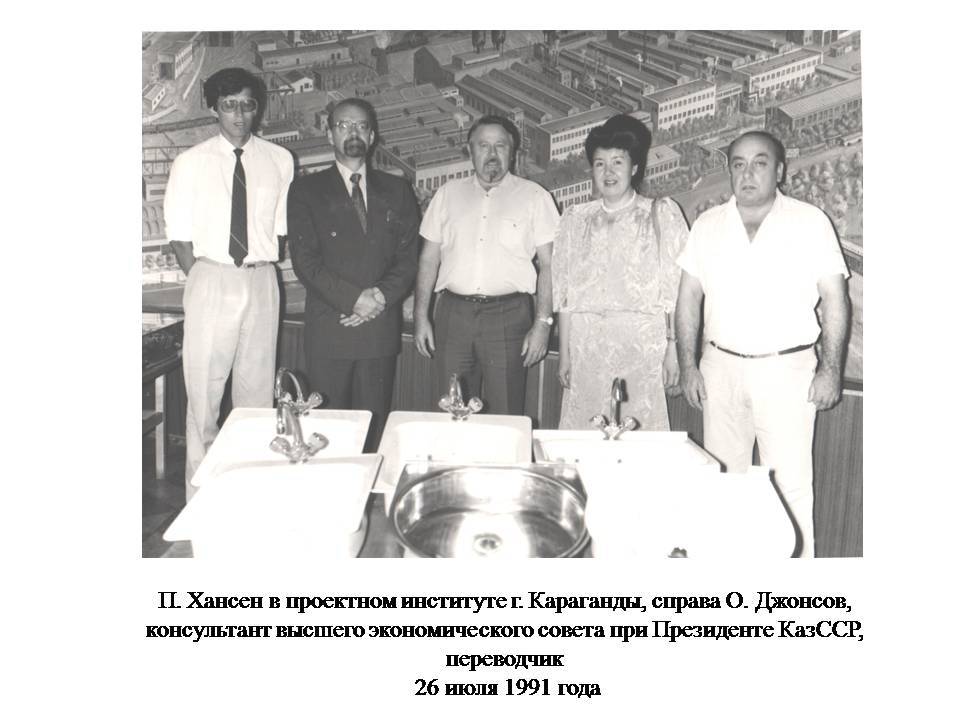 Hansen during his visit to Karaganda-based project institute.

On July 26-27, Hansen visited the Karaganda region, where it was planned to create this type of a free economic zone. The Director of the UN Centre met with the Chairman of the Karaganda Regional Council Ideal Musalimov, with representatives of miners’ collectives and of foreign economic relations, as well as visited the Karkaralinsk state farm.

On July 29, a meeting was organized at the Ministry of Foreign Economic Relations of the Kazakh SSR with specialists in the field of external relations.

On the same day, talks were held with the Chairman of the Supreme Council of the Kazakh SSR, Yerik Asanbayev, during which the parties discussed issues of international expertise of our draft laws related to the integration of Kazakhstan into the global economic relations, particularly the draft Laws “On free economic zones” and “On foreign direct investment.” We later sent them to Hansen, who actively assisted in their examination by authoritative international experts. As a result, these laws, which were important for shaping the foundations of a market economy, were adopted by the parliament, taking into account the valuable recommendations received from these experts.

On July 30, the UN representative met with the members of the Committee for Economic Reforms of the Supreme Council of the Kazakh SSR. On the same day, he was received by Prime Minister Uzakbay Karamanov. During the meeting, we finalized the document on cooperation with the UN Centre on TNCs.

Hansen and Deputy Prime Minister Turysov then signed the “Agreement on Cooperation between the Government of the Kazakh SSR and the UN Centre on Transnational Corporations.” It noted the readiness of the UN Centre to provide all possible assistance in establishing relations on a mutually beneficial basis between enterprises of the country and transnational corporations in compliance with international economic and legal norms and conduct an expert assessment of draft laws related to the foreign economic activity of Kazakhstan and its integration into the global economic system.

In his interview to the KazTAG news agency following the visit, Hansen stressed that “he was convinced with his own eyes that Kazakhstan is a huge country with rich natural resources and great economic potential,” as well as that “the leadership of the country has taken a firm course towards the transition to market relations, and is striving to do everything in order to provide the people with decent standards of living.”

I would also like to emphasize that, as I was accompanying Hansen throughout the visit, I witnessed his genuine interest in our country, its culture and history, sincere respect and readiness to help in the implementation of our plans to transition to a market economy. I remember how he admired the majestic panorama of the mountains in Alma-Ata, the endless Kazakh steppe in the Karaganda region and the amazing nature of the Karkaralinsk reserve.

This story had an interesting continuation. When at the end of December 1991, upon the instruction of Kazakhstan’s First President Nursultan Nazarbayev, I arrived in New York to prepare our newly independent state to join the UN membership, Peter was one of the first persons I met with. He told me that he had issues with the Legal Department of the UN Secretariat because he signed an agreement with the government of a union republic. “You should have been praised, rather than told off”, I said, “after all, you were the first person from the UN Secretariat who foresaw that Kazakhstan would become a full-fledged member of this global Organization.”

We remained good friends and colleagues for almost eight years of my work in New York as the first Permanent Representative of the Republic of Kazakhstan to the UN.

Ultimately, the first visit of a high-ranking UN representative to Kazakhstan in July 1991 helped to lay the foundations for cooperation between our sovereign state and a global international organization.

Over the course of 30 years, I have been convinced more than once that the use of the UN’s unique experience in the socio-economic sphere in the first years of our independence contributed to the successful implementation of fundamental reforms to create an effective market economy in our country, attract foreign direct investment and fully integrate our newly independent state into the global economic system.