Snow Leopards Lost to Vikings, but Not Lose Hope for Playoffs

OSLO – Sport has always been interesting for its intrigue. We were convinced of this when the Kazakh national team played their final against the Norwegian team. 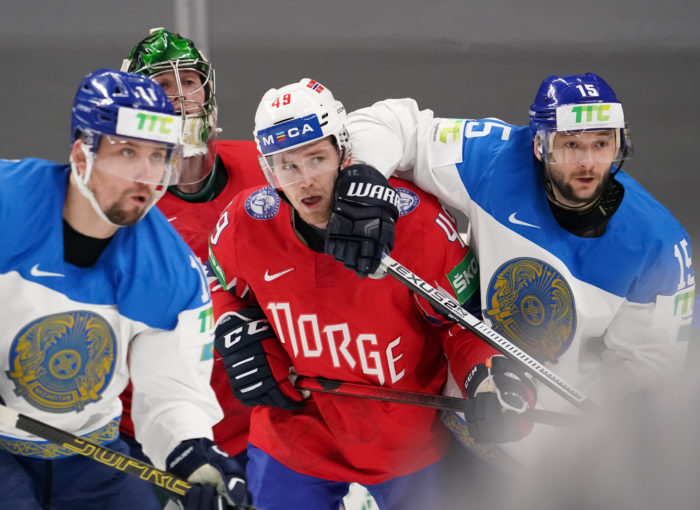 With their own chances of advancing gone, Norway was motivated to play the role of spoiler in its last game of the 2021 IIHF Ice Hockey World Championship and came up with a 3-1 win over a Kazakhstan team that could have secured its first ever quarter-final berth with a win. The shots on goal were even in the game, 27-27, and overall, it was a fairly even game, with each team having times of dominance.

It was the second time during this tournament that a Norway victory has put a severe dent in a team’s playoff chances after earlier beating host Latvia in a shootout. 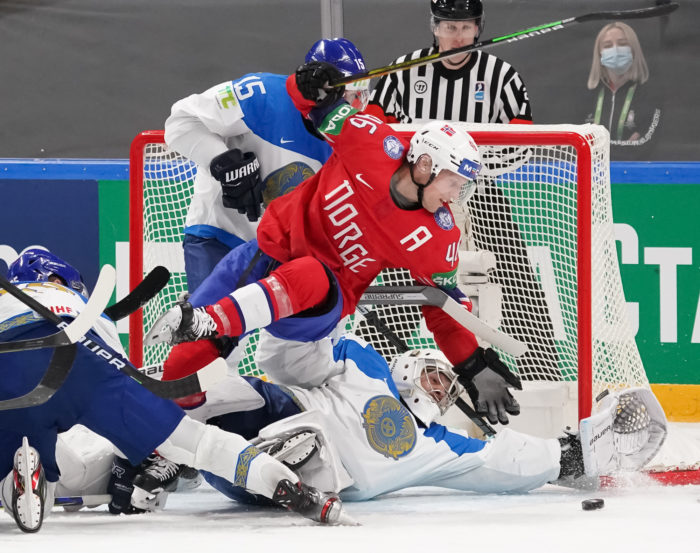 “I think there was not enough luck for us,” said Kazakh coach Yuri Mikhailis. “The guys had the same motivation before this game, and I thank them. They were playing until the last minute, the last second. But maybe there was not enough patience on our part? I don’t know, but overall, I can’t say this was a bad game from my team.” Photo credit: IIHF.

The two teams spent most of the first period feeling each other out, with Kazakhstan having a slight edge in play.

Kazakhstan scored the only goal of the first period with exactly four minutes remaining. Viktor Svedberg sent Dmitri Shevchenko away on a breakaway with a stretch pass and the normally low-scoring KHL centre beat Henrik Haukeland with a perfect shot above the left pad and below the blocker.

The Kazakhs had a chance to double their lead early in the second on the game’s first power play but couldn’t get much going, and then at 27:26 it was Norway’s turn when Ivan Stepanenko was sent off for interference.

It took just 31 seconds for Norway to pull even, with Thomas Valkvae Olsen putting a very nice tip on Mathias Trettenes’ point shot.

Sparked by the goal, Norway kept Kazakhstan pinned in its own zone for much of the remainder of the second period and into the start of the third. On a delayed penalty a minute into the final period, Trettenes made another nice play, beating a winger wide on the rush, then cutting into elude a defenceman before making a pass to Stefan Espeland, who fired it home and then immediately pointed to Trettenes.

With the Kazakhs back on their heels, goaltender Nitkita Boyarkin made a fantastic save to keep his team in the game, lunging to his right in desperation to make a pad save off Mathis Olimb.

Kazakhstan seemed to regain some momentum of a power play, then with 11:30 to play, Nikita Mikhailis was sprung on a breakaway. He tried to make a move and slide it under Haukeland but the Norwegian goalie stayed with him.

They kept pressing, knowing that any points they take from this game will come in handy tomorrow, and with 4:43 to go, Martin Roymark picked up his second penalty of the game, this one a 2+10 for checking to the head of Pavel Akolzin at the side of the net. However, the best chance to score went to Norway’s Mats Rosseli Olsen on a shorthanded breakaway.

In the last two minutes, the Kazakhs found themselves pinned in their own zone, unable to get Boyarkin to the bench for an extra attacker. With traffic in front, Mathis Olimb took a pass from brother Ken Andre Olimb fired a shot into the top corner to give Norway some insurance with exactly a minute to go.

“I think there was not enough luck for us,” said Kazakh coach Yuri Mikhailis after the game. “The guys had the same motivation before this game, and I thank them. They were playing until the last minute, the last second. But maybe there was not enough patience on our part? I don’t know, but overall, I can’t say this was a bad game from my team.”

“We wanted to end the season well and play until the last game,” said Norwegian captain Jonas Holos. “We came out and wanted to play for Norway and show some respect for our country. We battled all the way in. Of course it’s not a perfect game but it’s a lot of games in a short period of time.”

This loss doesn’t end the Kazakhs’ chances as they still sit third in Group B with 10 points. But now that they’re out of games, they have to hope for some favourable results on the last day of the group stage.

As mentioned, this was both teams’ last game of the group stage. Norway will finish seventh in Group B with eight points, while Kazakhstan will watch tomorrow’s game nervously and hope that their 10 will be enough to crack the top four.