By Aizada Arystanbek in Business, Kazakhstan Region Profiles: A Deep Dive Into the Heart of Central Asia on 18 June 2021

NUR-SULTAN – The construction of the new wind farm Badamsha-2 that is expected to significantly increase the rapidly growing renewable energy industry in Kazakhstan will be completed in the Aktobe region by the end of the year, reported the press service of Sarens engineering company on June 15. 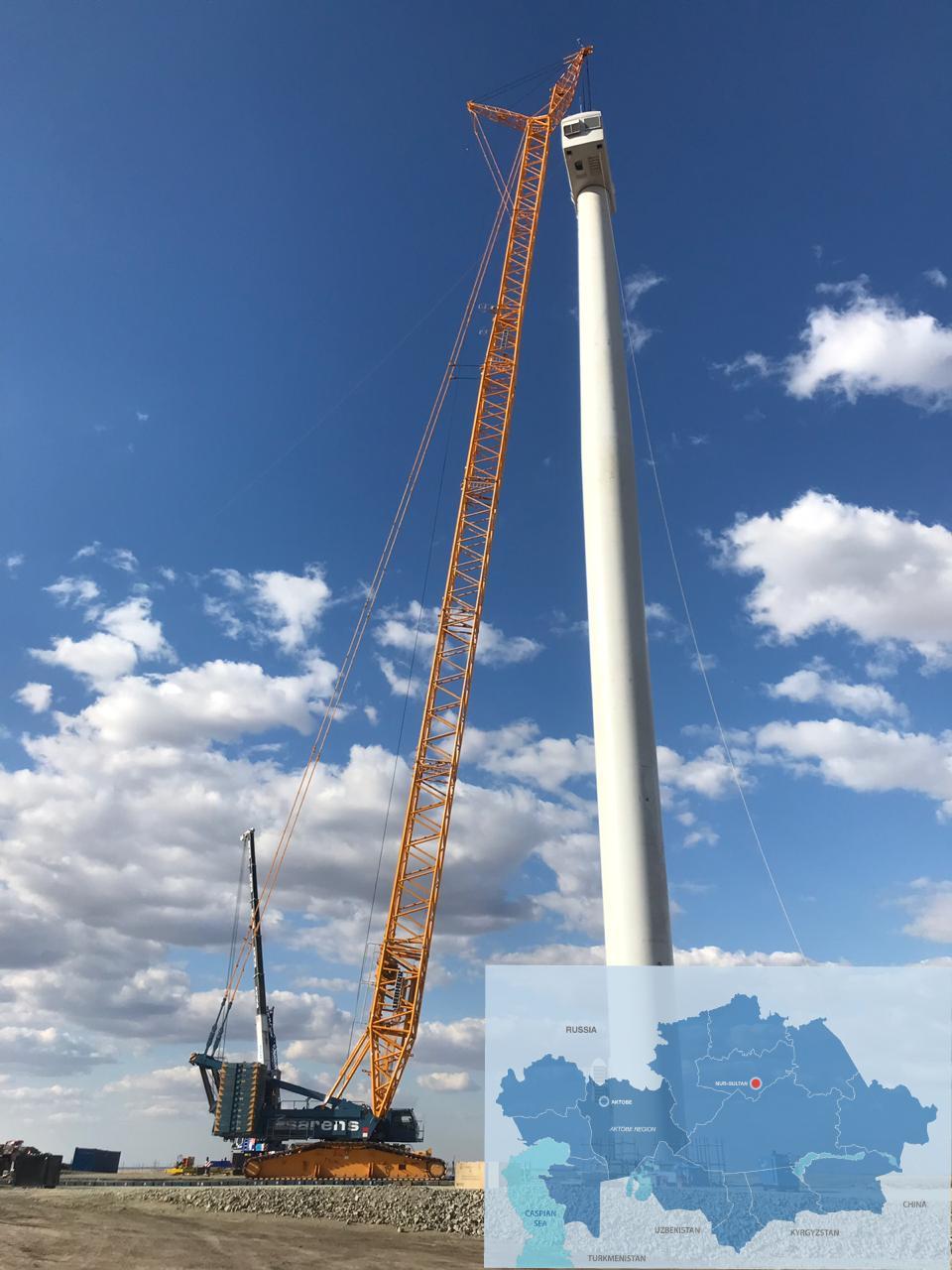 Badamsha is the first commercial wind farm in Kazakhstan. Photo credit: Sarens. Click to see the map in full size.

Badamsha-2 will be the second wind farm built in the Badamsha village of the Aktobe region. The full use of the first wind farm in Badamsha began in March 2020. Since then, the wind power plant farm with a capacity of 48 megawatts was able to increase the wind power capacity of Kazakhstan by 25 percent. With a design life of 25 years, Badamsha is expected to provide the Aktobe region with 198 gigawatt-hours of electricity annually, while preventing carbon dioxide emissions equal to 172,000 tons per year. This joint project of Eni company and General Electric also currently employs 15 people.

According to experts, Kazakhstan has a huge potential for the use of renewable energy sources for the transition to green energy, which is a growing sector of the global economy. Last year, the U.S. Agency for International Development (USAID) reported that in about 50 percent of Kazakhstan’s territory the wind speed is 4-5 meters per second at an altitude of 30 meters and the number of hours of sunshine in the country is 2,200-3,000 hours per year.

“The potential for the use of wind and solar energy is higher compared to other renewable energy sources. These energy sources are more affordable and spread throughout the country. For example, the technical potential of wind generation in the republic is 920 billion kilowatts per hour. This is more than the current generation and consumption of electricity in the country,” said the United Nations Development Program (UNDP) National Expert Erlan Dairbekov in an interview with Kapital.kz.

As of 2020, there are 101 renewable energy power plants found in the country with the participation of both domestic and foreign investors. Out of 101 plants, 22 are wind farms, 37 – solar plants, 37 – hydro plants and five are bioelectric power plants, reports the Kazakh Ministry of Energy. Wind farms are responsible for generating 45 percent of the total renewable energy in Kazakhstan.

“My opinion is that these targets are reachable and doable. I am sure that renewable energy will provide the required energy mix to secure the economic development of the country in the long run. This is vital to realizing our ambition of entering the elite club of the 30 most developed economies,” said Arman Kashkinbekov, an honorary CEO and Board Member at the Association of Renewable Energy of Kazakhstan and a Director of the International Snow Leopard Foundation in an interview with The Astana Times.

For the past three years, Kazakhstan has been able to attract more foreign investors and simplify the process of investments in renewable energy plants which led to increased transparency and lowering of tariffs to compete with traditional energy sources.

The Badamsha wind farm is a direct result of the increased development of the investment processes. In 2017, The Kazakh Ministry of Energy, with the support of the United Nations Development Program (UNDP), launched a project auction to promote private sector investment in renewable energy in Kazakhstan. One of the auctions was won by a subsidiary of the Italian oil giant Eni, which led to the launch of Badamsha and is expected to build Badamsha-2.

“Central Asia has undeniable natural wind resources that up until now were not being utilized. We believe this is a very strategic region with a lot of potential for expansion in the coming years. Kazakhstan has demonstrated its commitment to renewable energy with the Badamsha project and others already in construction, and it will continue leading the way in Central Asia, which we believe will be a turning point for its neighbors to follow suit,” said Project Manager of Sarens Alok Kumar Gupta to The Astana Times.

In 2020, 16 projects with a total installed capacity of 147.95 megawatts were picked at Kazakhstan’s renewable energy sources auctions with the participation of 27 Kazakh and foreign companies from Russia, the Netherlands and Germany.