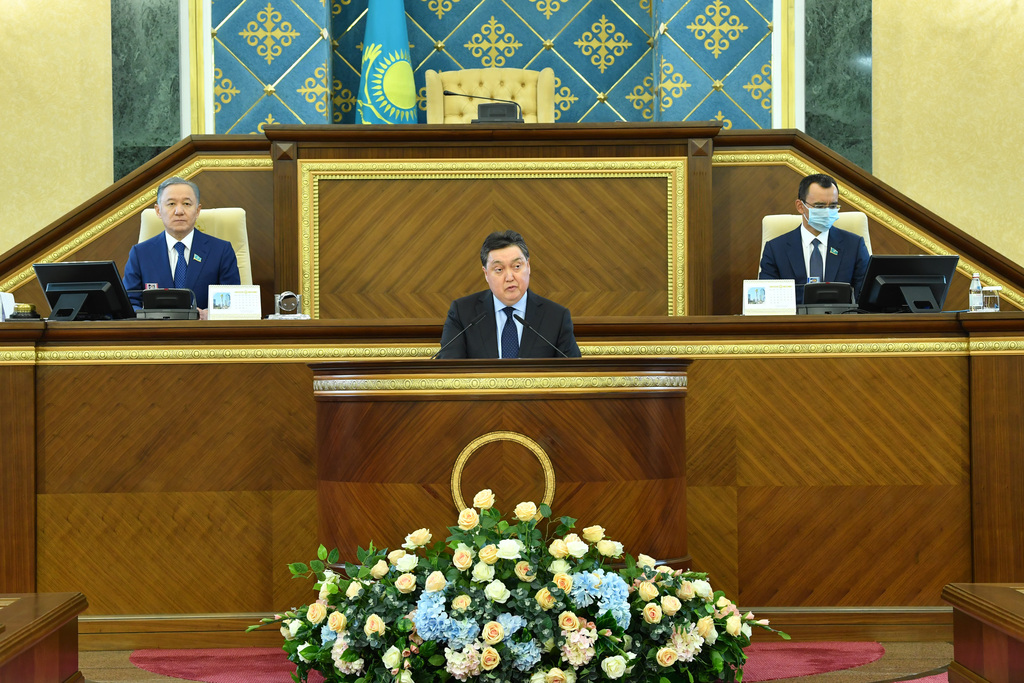 Mamin spoke about agriculture as a major sector boosting the sustainability and self-sufficiency of the national economy. Last year, investments in agriculture grew 15 percent and investment in food production – 13.5 percent.

As part of measures to ensure food security, 59 projects were implemented in 29 major food production areas, including 48 dairy farms, 3 meat, and 8 poultry factories, producing more than 220,000 tons of products.

The cattle population increased by 5.6 percent to 7.8 million heads, while 20.1 million tons of grain and leguminous crops were milled.

The government and the parliament adopted the law on economic growth recovery that included amendments to 14 codes and 71 laws in nine areas. Among the measures to support businesses were concessional lending to small and medium-sized businesses, loan refinancing and loan deferrals.

700,000 businesses operating in the industries that were hit hardest by the pandemic received tax breaks amounting to one trillion tenge (US$2.3 billion). ,

“Despite the difficult social and economic situation in the country, we have fulfilled all our social obligations to the population,” said Mamin.

Teachers received a 25 percent salary raise, while cultural and archival workers saw their salaries grow by 50 percent, and law enforcement and special services employees – from 30 to 70 percent.

The COVID-19 outbreak levied a heavy toll on the country’s healthcare system, but at the same time facilitated much-awaited changes.

The number of mobile teams reached 3,700 and more than 750,000 medical services were provided.

“This played a key role in providing medical assistance to coronavirus patients at home,” Mamin added.

PCR testing capacity was also improved, unlike in the first days of the pandemic, reaching nearly 123,000 tests daily.

“I would like to express my enormous gratitude to all health care workers – doctors, nurses, and staff who were directly involved in the selfless fight against the pandemic,” said Mamin.

Mamin said the country’s economy is now on the path to recovery. In the first five months of 2021, the economy grew by 1.6 percent with positive growth in all sectors.

The growth of investments in fixed assets, excluding the mining industry, amounted to 25.5 percent.

In 2021, the Kazakh government expects economic growth to reach 3.5 to 4 percent with plans to employ 1.2 million people.

“We plan to commission 200 square meters of housing, open 200 schools and open 30 medical centers, repair and build 6,000 kilometers of roads, provide 98 percent of the population with drinking water in urban areas and 91.8 percent in rural areas,” said Mamin.