By Aizada Arystanbek in Kazakhstan Region Profiles: A Deep Dive Into the Heart of Central Asia, Nation on 17 June 2021

NUR-SULTAN – Saxaul trees will be planted on one million hectares of the drained bottom of the Aral Sea on the territory of Kazakhstan as part of the new effort to stop dust storms in the region, reported the Central Communications Service on June 15. 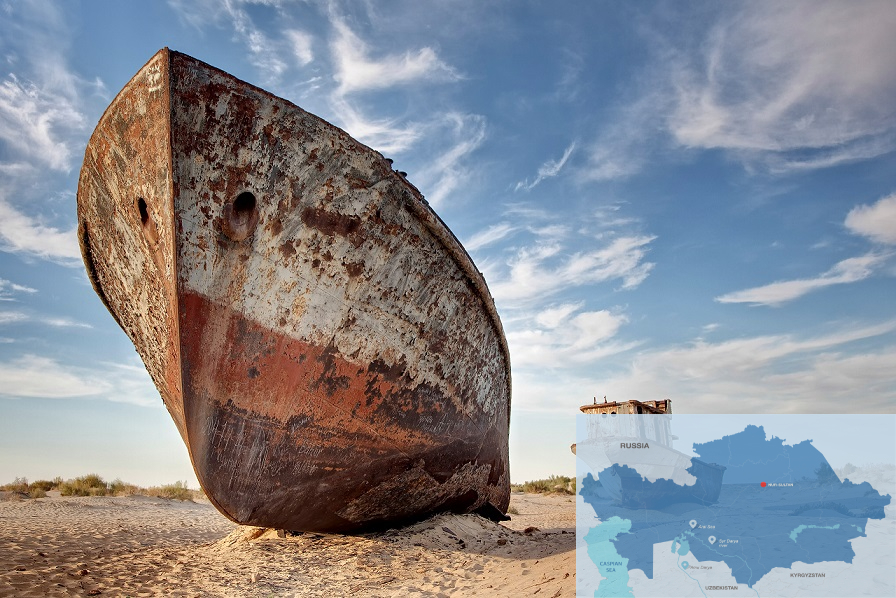 Before the environmental disaster, the economy of the Aral Sea region was centered on agriculture and fishery. Photo credit: Daniel Kreher/imageBROKER/Corbis. Click to see the map in full size.

The decision was made after a  delegation of the Kazakh Ministry of Ecology, Geology and Natural Resources visited Uzbekistan to study their experience in combating desertification of the Aral Sea. Uzbekistan’s recent accomplishment includes successfully planting and growing saxaul on the bottom of the Aral Sea. The Uzbek efforts resulted in trees taking roots over 1.2 million hectares of the sandy territory.

“We would like to learn from this experience to make sure that the one-time measures taking place in different locations have a synergistic effect. Now our ministry is developing a program to solve this problem of dust storms once and for all by systematically approaching it. Different types of plantings will be used including both aerial seeding and mechanized planting. We are currently looking for alternative sources of funding outside the state budget to involve all interested parties,” said Vice Minister of Ecology, Geology and Natural Resources Aliya Shalabekova.

Planting saxaul trees has proved to be one of the most effective tools to combat increased amounts of sand and salt that appeared due to the draining of the Aral Sea. Kazakh authorities have been planting trees in the area for many years now. In January 2021, Kazakh Minister of Ecology, Geology and Natural Resources Magzum Mirzagaliyev shared that 270,000 hectares of saxaul forest have been planted in the country so far. The newly announced plan will be the biggest effort that will cover the largest territory of the sea.

In order to protect the newly planted trees, Majilis (a lower house of the Kazakh Parliament) is currently considering the draft of the “On the plant world” law regulating the protection of plants that grow outside the specially protected natural areas. The new law will determine the responsibility, obligations and rights of all participants in public relations for the growth of plants, including trees, shrubs, herbaceous plants.

Other efforts to restore the Aral Sea focus on expanding the sea’s water mirror, the distance from the top of the wellhead to the water surface. So far, Kazakhstan has been successful in restoring 40 percent, or 870 square kilometers, of the water surface of the Aral Sea. The mineralization of water was also reduced causing the return of more than 20 fish species to the northern part of the Aral Sea, as opposed to the one species found there before.

The U.S. Agency for International Development (USAID) is also involved in the process of identification of the best practices and lessons learned in preparation for a restoration effort of the Aral Sea ecosystem that will begin later this year.

Previous environmental measures concerning the Aral Sea included the Kazakh government’s partnership with the World Bank in order to secure the existence of the Northern Aral Sea and improve the ecological conditions in the delta area and around the sea. To preserve its human and animal health and biodiversity, the World Bank has allocated a $1.9 grant to the Kazakh Ministry of Agriculture in 2008. In April, the World Bank, in partnership with the Global Landscapes Forum (GLF), the Kazakh-German University (DKU) and Plug and Play, launched the Global Disruptive Tech Challenge 2021: Restoring Landscapes in the Aral Sea Region competition. The goal of the challenge was to attract innovative and effective solutions to the Aral Sea eco problem.