NUR-SULTAN – May 9, 2021 marks the 76th anniversary of the Soviet Union’s victory over Nazi Germany in World War II. While the story of the hard-won victory of the Red Army is widely known, the story of the Kazakh hero who played a key role on the path to victory is less so. On April 30, 1945, lieutenant Rakhimzhan Koshkarbayev, along with his comrade Grigory Bulatov, mounted the Soviet flag over the Reichstag in Berlin, a gesture signifying a the final defeat of Nazi Germany. 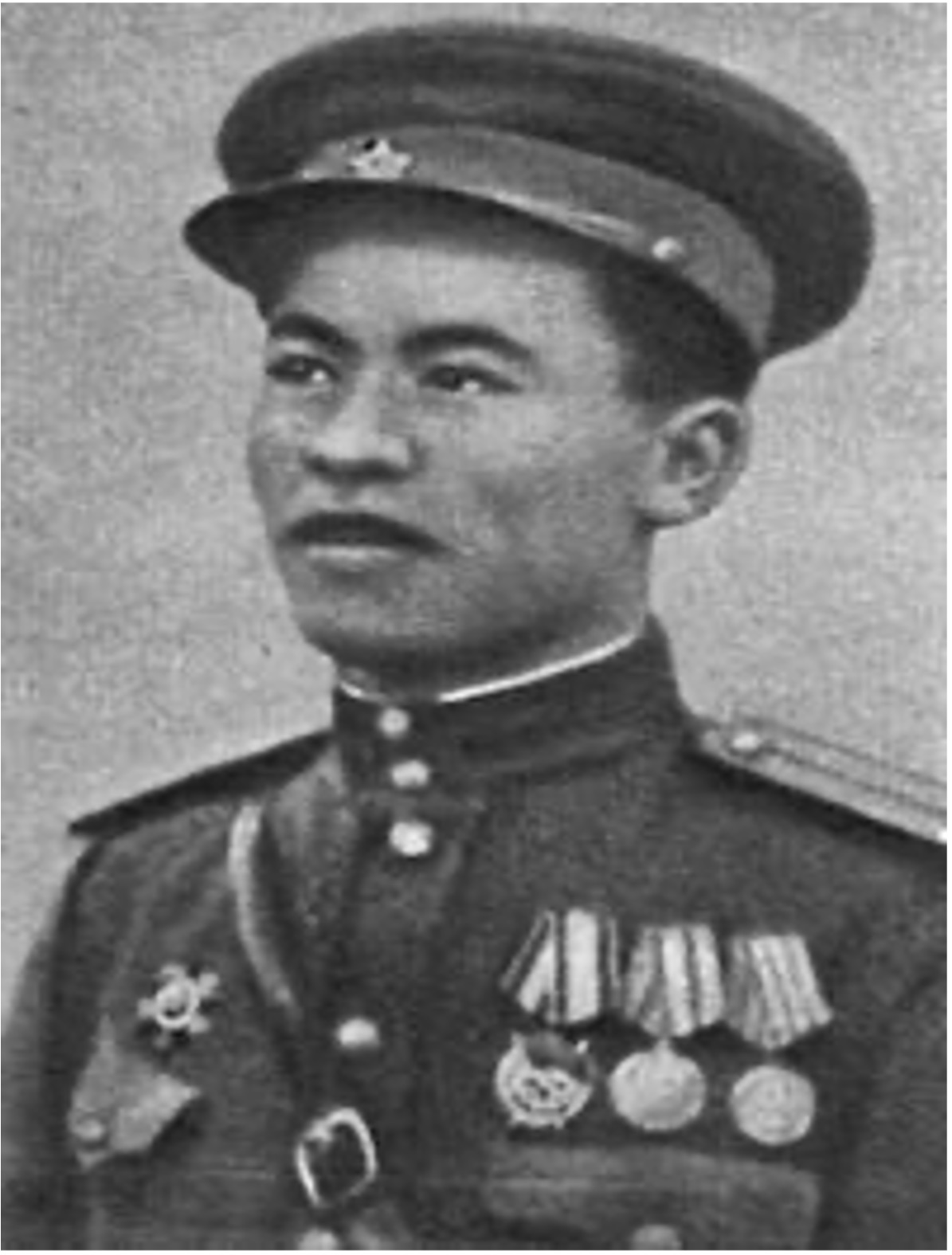 Koshkarbayev was born in 1924 in Kyrykkudyk of the Akmola region. His mother passed away when Koshkarbayev was only four and his father became a victim of political repression when he was 13. In 1942, Koshkarbayev was recruited by the Red Army and was trained in the Kokshetau reserve regiment. In 1944, the Kazakh soldier graduated from the Frunze Military School.

Koshkarbayev served as a platoon commander of the legendary Idritsa Rifle Division, formed in Kostanay. Before joining the storming of Berlin, he participated in the Soviet liberation efforts of Poland and other parts of Germany. Following the storming of the Reichstag, only 12 people out of 38 soldiers of Koshkarbayev’s platoon survived.

On April 25, 1945, the ring of military forces around Berlin closed and the storming of the German capital began. Koshkarbayev, who was only 21 at the time, and Bulatov were commanded by the battalion commander Davydov to plant the victory banner on the Reichstag.

“An intense fire started. There was only one soldier left beside me. It was Grigory Bulatov. He kept asking: “What are we going to do, Comrade Lieutenant?” We laid with him near a ditch filled with water. “Let’s put our names on the flag,” I suggested to him. And with a chemical pencil, which I had in my pocket, right there, lying under the bridge, we wrote “674 regiment, 1 battalion” and our names,” later recalled Koshkarbayev.

It took the Soviet fighters seven hours to cross 360 meters to the Reichstag building. “What is this distance for young feet? This is a short dash, a playful fight with the wind. But for Grigory Bulatov and me, this distance was tantamount to an abyss into which it is easier to fall into than pass over. We managed to get through it. We succeeded,” Koshkarbayev shared his first thoughts after the heroic act.

Director of the Chokan Valikhanov Institute of History and Ethnology, Professor Ziyabek Kabuldinov states that Koshkarbayev’s deed was widely documented by witnesses and the press shortly after the War was over. The combat logs and final reports relayed the Kazakh lieutenant’s victorious actions. Similar confirmation could be found in memoirs of Soviet fighters, such as Fedor Zinchenko, commander of the 756th regiment, who documented the episode in his book.

However, despite several documents stating otherwise and multiple witnesses, the heroic act of first mounting the victory banner over Reichstag was later assigned to Soviet soldiers Mikhail Yegorov and Meliton Kantaria. According to Professor Kabuldinov, the Soviet authorities did not wish to report to Joseph Stalin, secretary-general of the Communist Party of the Soviet Union, that the banner was planted by a Kazakh soldier with a Turkic last name. Koshkarbayev’s act did not fit with the official Soviet line.

Therefore, Yegorov and Kantaria, who also mounted the Soviet Flag over the Reichstag but only after Koshkarbayev and when the victory was already secured, became the official symbols of the victory. Both soldiers received the titles of Heroes of the Soviet Union, while Koshkarbayev only received the Order of the Red Banner, a significantly less prestigious military award.

Despite receiving recognition and support from the people and sparse magazine articles published about Koshkarbayev’s heroic act, the Kazakh lieutenant did not receive the order of the Hero from the Soviet authorities. Koshkarbayev himself petitioned multiple times for the order to be awarded to his comrade Bulatov but also remained unsuccessful. 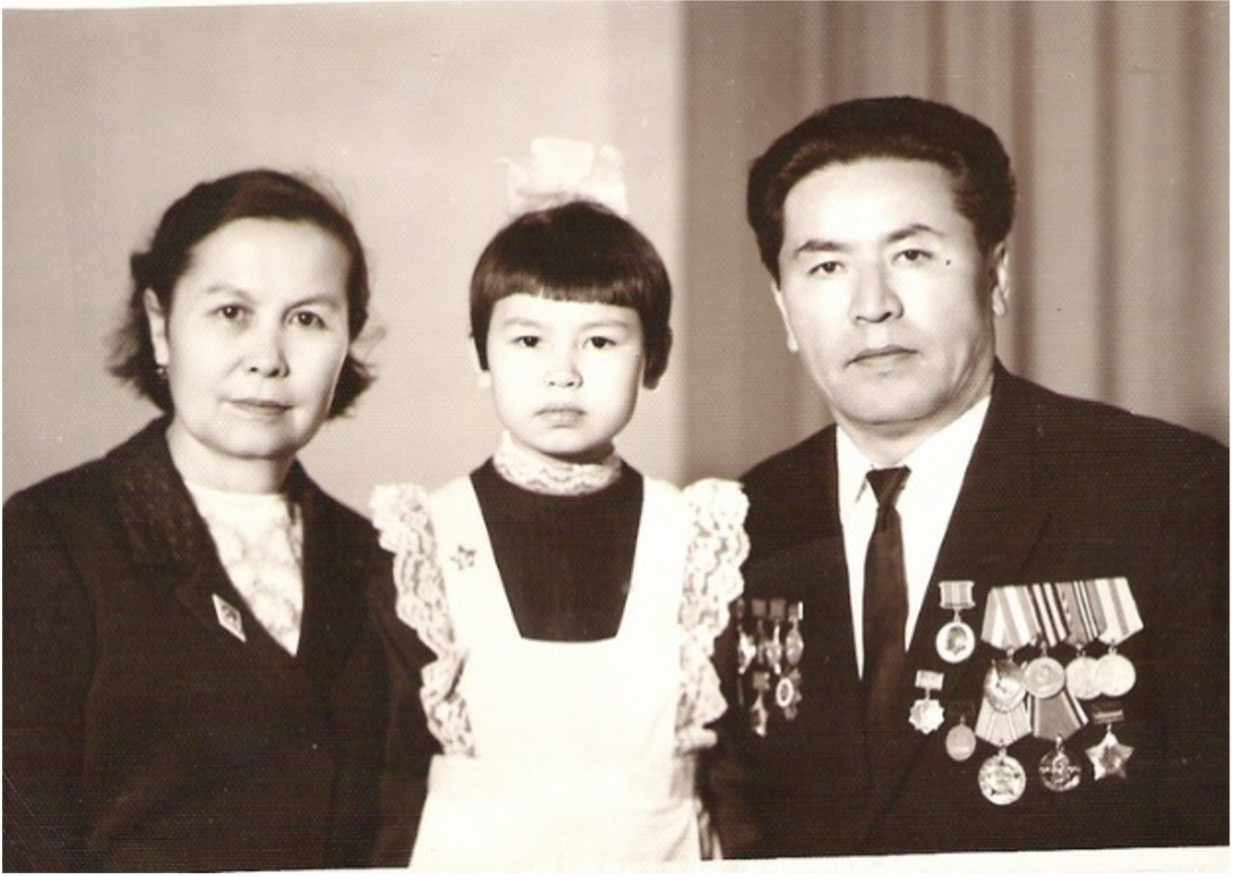 Rakhimzhan Koshkarbayev and his family.

After the War, Koshkarbayev continued to serve in the Soviet army. He later became an instructor for the Akmola regional executive committee. He also served as the Chief Inspector of the Main Directorate of the Resettlement Department under the Kazakh SSR’s Council of Ministers.

Koshkarbayev also wrote several autobiographic books documenting his service during the War. His life story became a subject of Kazakhfilm studio’s documentary “Soldier of Victory” in 1980.

Koshkarbayev was elected three times to the Council of People’s Deputies of Alma-Ata. He was a member of the Presidium of the Kazakh branch of the Soviet War Veterans Committee and of the Soviet-German Friendship Society.  He remained actively engaged in social work for the rest of his life before passing away in 1988. 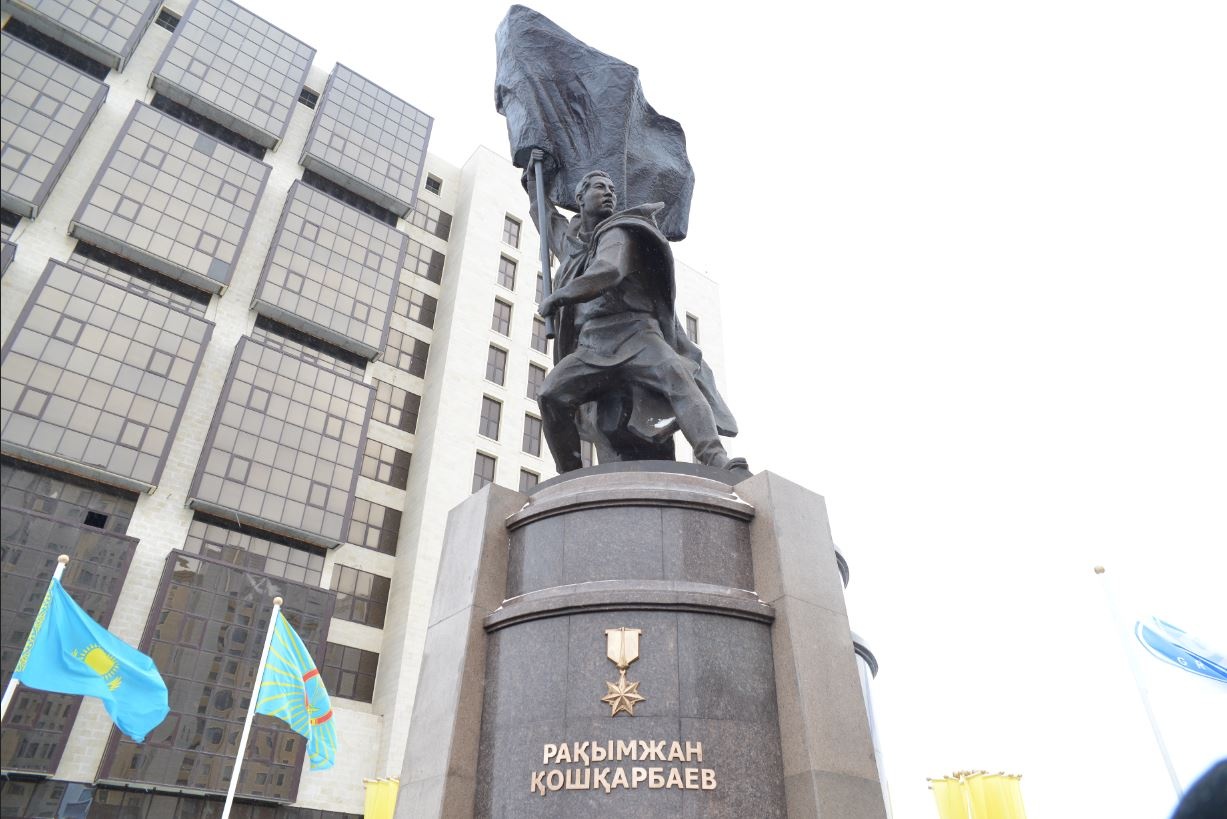 After Kazakhstan gained independence, Koshkarbayev finally received full recognition for his heroic service in the War. In 1999, Koshkarbayev was posthumously awarded the high title of Khalyk Kakharmany (The Hero of the People). In 2005, Russian historians officially acknowledged that Koshkarbaev and Bulatov were the first to erect the banner during the storming of the Reichstag. In 2016, an 11-meter monument of Koshkarbayev was unveiled in Nur-Sultan. The monument is located on the street also named after the hero.

Today, Kazakhstan remembers and recognizes Koshkarbayev for his valuable contribution to the fight against Nazism.