OSLO – In the fourth game of the World Championships using every weapon in its arsenal, the national team of Kazakhstan ended Germany’s winning streak at three games with a 3-2 victory on Wednesday in Riga. Pavel Akolzin scored the go-ahead goal on a late third-period breakaway. 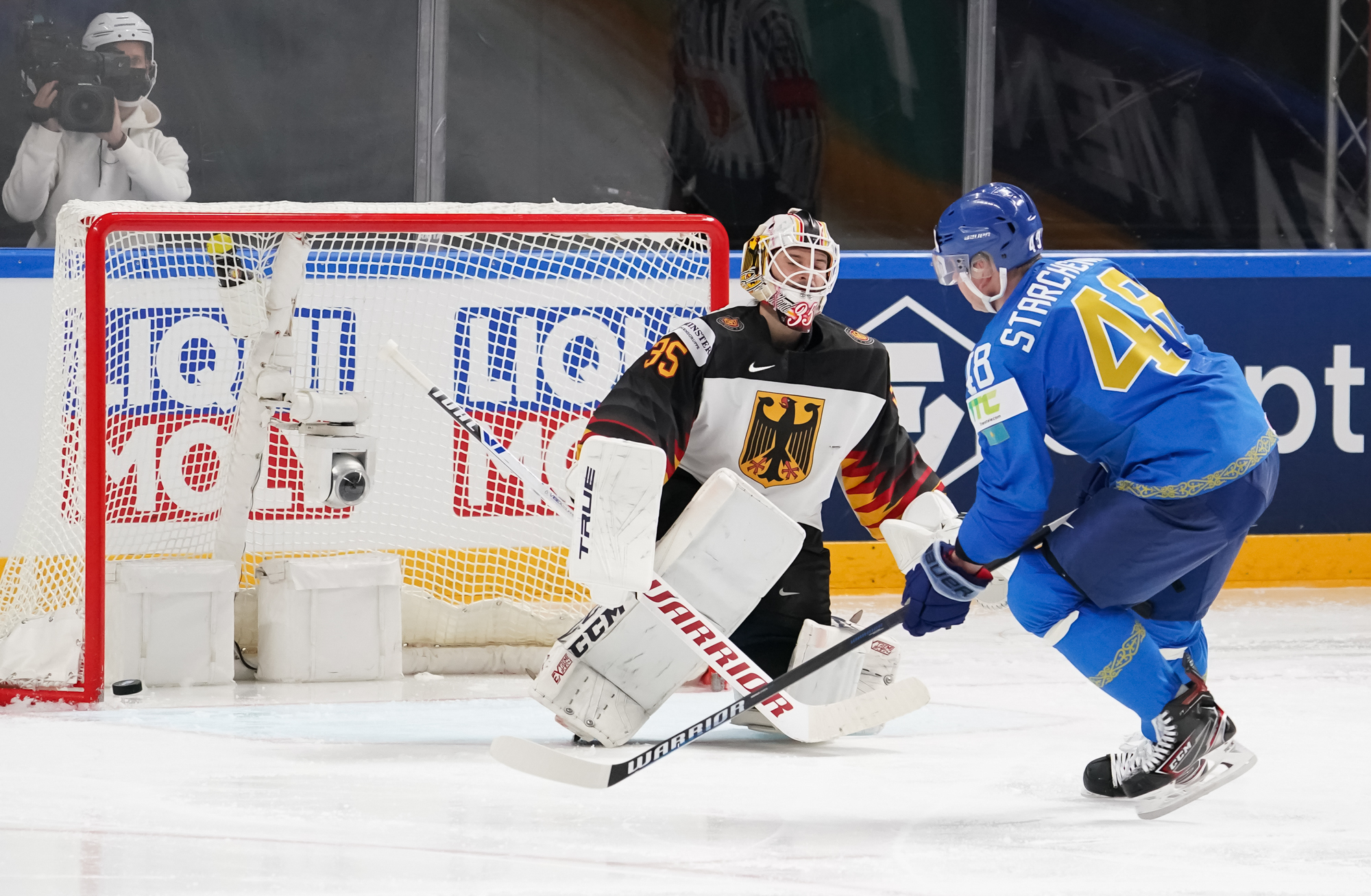 Both sides stuck with their starting goalies in a duel between Kazakhstan’s Nikita Boyarkin and Germany’s Matthias Niederberger. Boyarkin stepped up as shots favored Germany 30-15.

In a gritty, scoreless first period, both teams came out hard and took turns ringing pucks off the iron, first Ivan Stepanenko for Kazakhstan and then Jonas Muller for Germany.

Germany had better pressure during its first man advantage with Anton Sagadeyev off for hooking, but couldn’t capitalize.

At 6:39 of the second period, Kazakhstan’s Alexander Shin drew first blood on the rush. He took a drop pass from Stepanenko and blew a slapper down the middle over Niederberger’s glove. This was Kazakhstan’s first regulation-time lead of the tournament.

Germany struck back three minutes later with two longtime NHLers joining forces. Tobias Rieder busted in over the Kazakh blue line, drawing multiple defenders to him, and backhanded the puck to Tom Kuhnhackl on the left side. Kuhnhackl blasted a rising slap shot past the kneeling Boyarkin’s glove side. 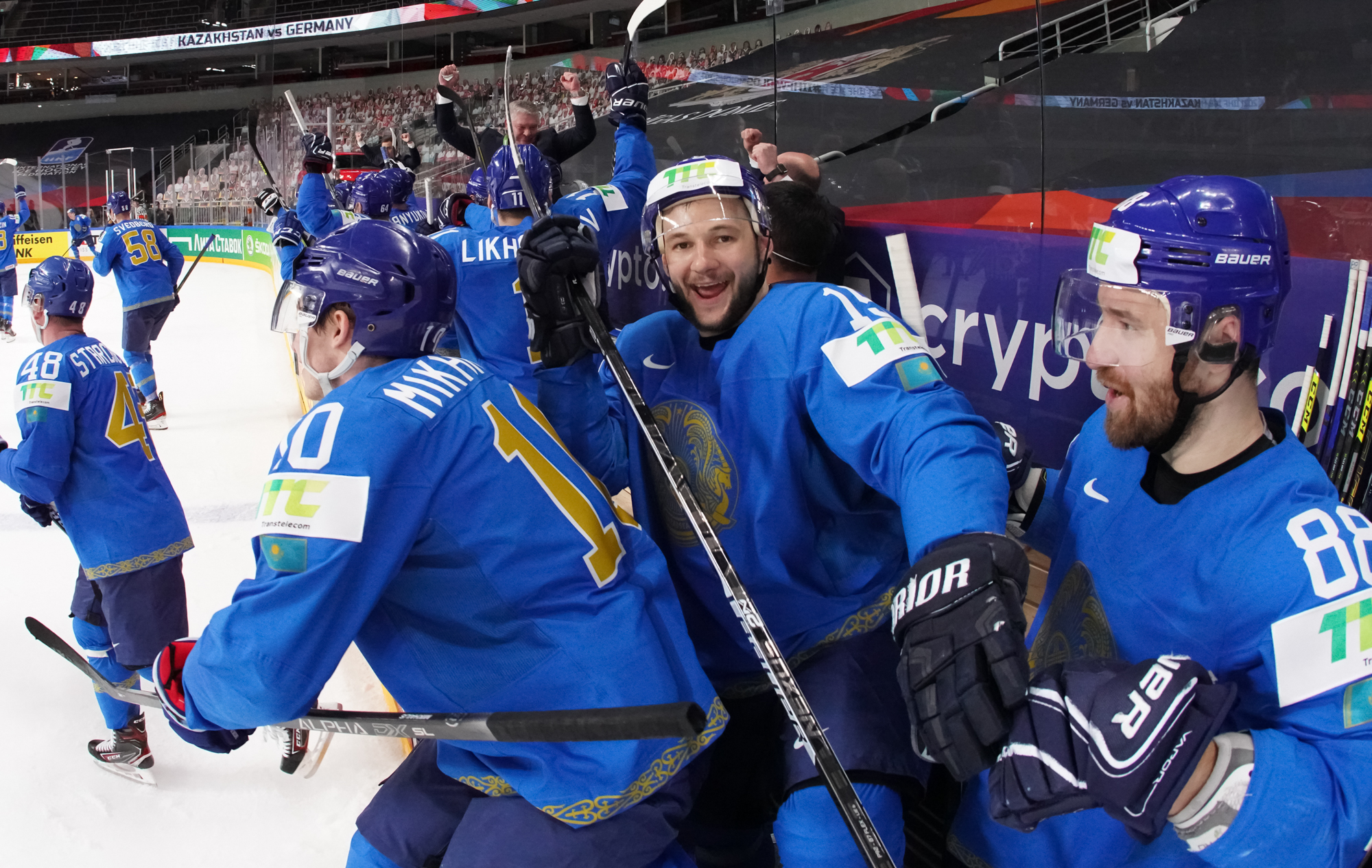 Coming down the right wing, Matthias Plachta thought he’d given Germany its first lead when he surprised Boyarkin with a quick snapshot from the top of the faceoff circle. The Kazakhs promptly challenged the play as offside, however, and the goal was erased.

Germany was undaunted, as Markus Eisenschmid capitalized at 14:07 on a German power play off Stefan Loibel’s set-up. However, the Kazakhs challenged it again, claiming defenceman Moritz Seider – the catalyst on the play – had created an offside with his pass to Loibl coming in over the blue line. This time, the refs ruled in Germany’s favor, and Kazakh head coach Yuri Mikhailis, assessed a delay-of-game penalty, sent his son Nikita to the box.

In the first minute of the third period, Kazakhstan tied it up on a penalty shot. German captain Moritz Muller tripped up Akolzin, who was breaking into the clear. For the penalty shot, Mikhailis picked captain Roman Starchenko, who scored in the shootout versus Finland. Starchenko made no mistake, going five-hole on Niederberger.

Akolzin got loose again on a super stretch pass from defenceman Alexei Maklyukov, and this time nobody was touching him. He zipped a low shot past Niederberger with 4:18 left to make it 3-2.

Seeking the equalizer, the Germans called their timeout with under two minutes remaining and pulled Niederberger for the extra attack. Coach Mikhailis smartly used his timeout at 19:11 to give his troops a breather after an icing call, and Kazakhstan hung on.

Both of Kazakhstan’s previous wins came in the shootout, 3-2 over Latvia and 2-1 over defending champion Finland. With seven points, they’re giving themselves a great shot at the quarter-finals.

This was the fourth all-time World Championship meeting between these nations. Germany defeated Kazakhstan 4-2 in 2004 in the Czech Republic, lost 2-1 in 2005 in Austria, and won 2-1 in a shootout in 2014 in Belarus.

These teams will both face 2019 IIHF World Championship finalists next. Kazakhstan takes on Canada on Friday, while Germany confronts Finland on Saturday.