By Zhanna Shayakhmetova in Society on 13 April 2021

NUR-SULTAN – The Persian leopard, Przewalski horse and tiger are now listed in the Red Book of Endangered Species, reported the press service of the Kazakh Ministry of Ecology, Geology and Natural Resources.

The areas where Persian leopard, Przewalski horse and tiger can be presumably found in Kazakhstan. Click on the picture to see the map.

The total population of  consists of no more than 1,300 of the species globally. A leopard can only be found in the Ustyurt Nature Reserve in the Mangystau Region. The predator was caught on camera at the end of November 2020.

Earlier, the Minister of Ecology, Geology and Natural Resources Magzum Mirzagaliyev said that it is important to preserve the nature in the national parks and other unique territories of the country. The management of the Ustyurt Reserve is engaged in monitoring the Persian leopard in cooperation with the Central Asian Desert Initiative project. 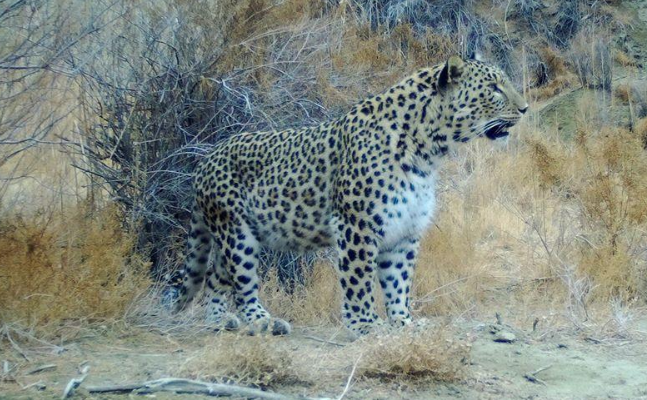 The leopard was caught on the camera on the territory of the Ustyurt reserve in November 2020.

According to the experts, the Persian leopards do not formally reside  in Kazakhstan.  Since the beginning of the 21st century,  only a few cases of the appearance of a leopard have been recorded. Presumably, the leopard entered the reserve from neighboring Turkmenistan.

The ministry has developed a program to restore the tiger population in the Balkhash region in the coming 15 years. It includes habitat preparation, tiger release and monitoring.

The Przewalski horse belongs to the subspecies of wild horses and is one of the rarest species of the horse family. There are only approximately 10 of the species in Kazakhstan.